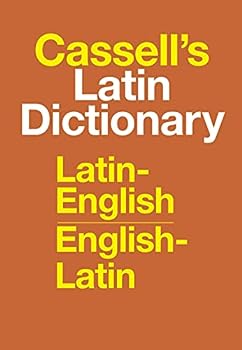 Since its first appearance in 1854, this dictionary has remained constant in its appeal to scholars through its many revisions. This Latin dictionary is among the best of its kind, reliable, compact... This description may be from another edition of this product.

Published by Thriftbooks.com User , 17 years ago
I am very pleased with the Cassell's Latin Dictionary. It has been of the upmost help as I have been trying to translate Tacitus. It provides mulitple meanings for words in order for you to find the one of best fit. It is a great product and very high quality. I would recommend it for anyone in a college Latin class. It was actually recommended by my professor and most of my classmates also use it. It is very highly regarded.

Published by Thriftbooks.com User , 18 years ago
The Cassell's Latin-English Dictionary has a long history. First published in 1854, it has continued in publication under various editors and revisions to the present text, the work of D.P. Simpson, Head of the Classics Department at Eton during the middle of the twentieth century. This book remains for all but the most advanced scholars in Latin the principle Latin dictionary. Clerics, students and general readers of the classics use this volume more than any other. There are other editions (concise editions, etc.), but this is primary volume for standard use. The dictionary has two sections, a Latin-English side, and an English-Latin side. The Latin-English side contains a primary vocabulary of classical Latin, most words used and found in writings between 200 BCE and 100 AD/CE. There are also proper nouns (names, places). Spelling was flexible in the ancient world; the spelling here follows the conventional modern spellings, with cross-references for significant variances. Words indicate definitions, declension or conjugation as appropriate, and some pronunciation guides. Latin authors are also indicated (in abbreviation) for almost every word.The English-Latin side is primarily useful for prose composition into Latin of the classical type. Because of the natural growth of language due to progress of technology and ideas, many English words will not be found, as there are no Latin equivalents. Latin equivalent words are taken largely from Cicero, Caesar and Livy, with some additions from legal and ecclesiastical Latin. There are additional sections for standard Latin abbreviations, the Roman calendar, bibliographies for word lists, atlases, general antiquities, and Latin language guides. This is the best choice for a Latin dictionary for almost any purpose. Even high-end scholars will want the Cassell's for ready and easy reference.

By Far the Best

Published by Thriftbooks.com User , 20 years ago
This is the only satisfactory "intermediate" Latin dictionary for the student who has just finished basic grammar and wants to read actual Latin authors. No other dictionary provides such a comprehensive overview of meanings at such an affordable price and attractive layout. Lewis' "Elementary Latin Dictionary" is by comparison twice as expensive and painful on the eyes. In addition, this Cassell Latin Dictionary has a more than adequate (although very brief) English to Latin dictionary for those who wish to compose in Latin themselves.For any student who wants to appreciate the Latin language, and how it changed over time, Cassell is by far the best buy (short of purchasing the [more expensive]Oxford Latin Dictionary).

Published by Thriftbooks.com User , 21 years ago
As a student, and taking Latin for my 3rd year, I found that Cassell's Latin Dictionary was the most helpful thing I had come across, and I wish that I had sooner! Every word comes equipt with all of the information about it! From pronunciation, to history of the word! It is an excellent dictionary and I reccomend it for all.
Trustpilot
Copyright © 2022 Thriftbooks.com Terms of Use | Privacy Policy | Do Not Sell My Personal Information | Cookie Preferences | Accessibility Statement
ThriftBooks® and the ThriftBooks® logo are registered trademarks of Thrift Books Global, LLC