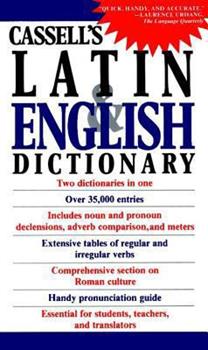 The greatest name in foreign language dictionaries is Cassell, the preeminent publisher of dictionaries for over 120 years. For fast, easy reference and comprehensive listings, Cassell's Concise Latin-English, English-Latin Dictionary is unbeatable. It contains in concise form the words most frequently used in scholarly and academic usage. Cassell's Concise Latin-English, English-Latin Dictionary is easy to read and full of complete usage information...

Published by peri , 9 months ago
This book was in very good condition when it arrived and is very comprehensive

Published by Thriftbooks.com User , 17 years ago
The Cassell's Latin-English Dictionary has a long history. First published in 1854, it has continued in publication under various editors and revisions to the present text, the work of D.P. Simpson, Head of the Classics Department at Eton during the middle of the twentieth century. This book remains for all but the most advanced scholars in Latin the principle Latin dictionary. Clerics, students and general readers of the classics use this volume more than any other. There are other editions (concise editions, etc.), but this is primary volume for standard use. The dictionary has two sections, a Latin-English side, and an English-Latin side. The Latin-English side contains a primary vocabulary of classical Latin, most words used and found in writings between 200 BCE and 100 AD/CE. There are also proper nouns (names, places). Spelling was flexible in the ancient world; the spelling here follows the conventional modern spellings, with cross-references for significant variances. Words indicate definitions, declension or conjugation as appropriate, and some pronunciation guides. Latin authors are also indicated (in abbreviation) for almost every word. The English-Latin side is primarily useful for prose composition into Latin of the classical type. Because of the natural growth of language due to progress of technology and ideas, many English words will not be found, as there are no Latin equivalents. Latin equivalent words are taken largely from Cicero, Caesar and Livy, with some additions from legal and ecclesiastical Latin. There are additional sections for standard Latin abbreviations, the Roman calendar, bibliographies for word lists, atlases, general antiquities, and Latin language guides. This is the best choice for a Latin dictionary for almost any purpose. Even high-end scholars will want the Cassell's for ready and easy reference.

Published by Thriftbooks.com User , 17 years ago
After all these years, I still love this one. I look at it all the time. Aside from the Latin-English and English-Latin dictionaries, it has information about usage -- conjugations, declensions, what each tense is used for, examples of conjugating in every verb and declining in every noun form (including the more obscure, such as dependent and deponent verbs), etc. It's in here. It's far more than a dictionary. If it isn't here, that means you need a straight-out usage or text book; this little dictionary goes far and above an average little dictionary. I've been using the same copy since high school and it's still next to my desk all the time. I don't even have a career related to Latin; I just love it. I love it for my own writing (in English), and simply my own edification.

Published by Thriftbooks.com User , 19 years ago
This is a good little Latin dictionary. It contains a variety of words used over the years, mostly focusing on classical Latin but including some from the ecclesiastical period. You can't expect to have every Latin word in here, because it's a very small format. The small format is very convenient, and the binding is good - I have used mine a great deal and the binding has held up very well.I especially like the way they deal with variant forms of words, especially participles. They often list the participial forms of verbs separately (but under the same root verb heading, prefixed by the word "Hence"). Latin participles, of course, are very easily determined from the verbs, so it's not absolutely necessary; but the way they did it is tremendously helpful in two ways:1. Sometimes the participle has a slightly different meaning or emphasis from the original verb. This allows them to separately distinguish the senses of the participle from the senses of the basic verb;2. It is a tremendous boon to memorizing vocabulary. Very often, an English word has been taken almost letter-for-letter from the participle, while the original verb has not come across into English. (Example: the verb "ago" doesn't come across in English, but the participial form "agens/agent" does.) Relating the verb to the English is a great help in memorizing vocabulary.My only real problem with this dictionary has to do with the size and printing. At this size, it is very difficult to distinguish the marks they use for long vs. short vowels. It would have been better to never mark short vowels, so you know that if it doesn't have a long vowel mark it's short. Sometimes you're left puzzling over whether a given vowel is long or short, not a good feature to have in a dictionary.Other than this, it's an excellent book, and an excellent value.

Still useful after all these years.

Published by Thriftbooks.com User , 20 years ago
As a graduate student in Latin, I have nothing but praise for Cassell's dictionary. The entries are concise and helpful, and it has sections for both English to Latin and Latin to English, which makes it ideal for introductory-level courses that require student composition.As for the reviewer who complained that it does not contain "longa" or "lata," the individual is quite mistaken and displaying his ignorance; Latin adjectives are listed under the masculines, thus "longus-a-um" is present, as is "latus-a-um."An inexpensive and effective tool that's valuable as a quick aid for nearly all levels of Latin.

Excellent for Latin students of all levels!

Published by Thriftbooks.com User , 24 years ago
This Latin-English dictionary contains definitions of Latin words as they were used during the Roman Civilizations height: 200 BCE-100 CE. A necessary and perfect companion for anyone translating Ovid, Vergil, etc. I also used the Oxford Latin-English Dictionary. The two used together help make translating easier and more enjoyable.
Trustpilot
Copyright © 2022 Thriftbooks.com Terms of Use | Privacy Policy | Do Not Sell My Personal Information | Cookie Preferences | Accessibility Statement
ThriftBooks® and the ThriftBooks® logo are registered trademarks of Thrift Books Global, LLC