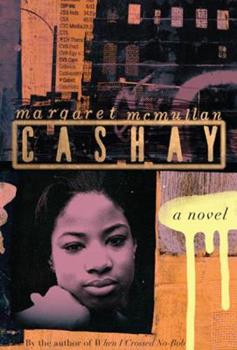 In her fourteen years living in a Chicago housing project, Cashay has never ridden in a taxi cab, seen the city lit up at night, or set foot in a museum. She's not pretty, or graceful, or bubbly like her little sister, Sashay. She gets her family by on a couple of dollars and food stamps every week. No, Cashay has never felt much like a treasure. "Your name doesn't signify who you are," Cashay tells her sister. But that was before Sashay was killed...

Gem of a book

Published by Thriftbooks.com User , 12 years ago
Cashay is a lovely book about a confused but ultimately brave girl struggling to find her way after her sister is killed. It is an emotionally honest and well-told story with a satisfying conclusion. Yes the girl does have mentors who are white, but her aunt Jo'Neisha is a strong role model, too. Those who are criticizing the book so intently are the ones who have issues. In Cashay, McMullan creates a likable and, to my mind, believable young woman who overcomes her troubled environment without rejecting her heritage.

Published by Thriftbooks.com User , 12 years ago
We live in Chicago, near Cabrini-Green, at least geographically. It is an area where there is great disparity in wealth. It is technically integreated, but blacks and whites do not interact very often. My daughter brought home this book from school and soon was engrossed in the story of the world near us, yet so far away. Ms. McMullan tells a riveting tale, that is ultimately uplifting, without glossing over the realities of life (and death)at Cabrini. This is a story of hope, but it is much more than that. I believe it is very effective at challenging the young adult reader to examine what their responsiblities are in our society. What are the obligations of the individual to help themselves and their fellow citizens? What can one individual do in face of institutionalized poverty and racism? Margaret McMullan challenges the reader without preaching, and lets these types of important questions naturally bubble up. I like a book that makes the reader ask the big questions, and it provoked some great conversations in our family. This is a very good read for the young adult reader and it made this adult ask himself some very tough questions.

A beautifully written story of hope

Published by Thriftbooks.com User , 12 years ago
CASHAY is an uplifting, beautifully written story about an unlikely friendship. It's about how two people from completely different worlds (a teenage girl from a grim, inner-city housing project and a single woman from the world of high-pressure finance), with completely different experiences, forge a bond that allows them to work together to overcome a terrible personal tragedy. Told from the POV of a 13 year old girl who has lost her sister to a stray bullet, this is a very powerful novel.

Published by Thriftbooks.com User , 13 years ago
Mississippi-born Margaret McMullan has once again made me feel younger by presenting the world through a child's eyes--and a little wiser (ditto)--this time after reading her newest novel, "Cashay" (Houghton Mifflin, 2009). Like her previous two highly-praised Houghton Mifflin books marketed to young adults, "How I Found The Strong" (2004) and "When I Crossed No-Bob" (2007), "Cashay" is a witty, heartbreaking book well worth reading--for the young, the middle-aged and the old. "How I Found The Strong" was named Indiana Best Young Adult Book of Fiction in 2004, earned the Mississippi Institute of Arts & Letters Award for Fiction in 2005, and was a Booklist Top Ten First Novel for Youth. "When I Crossed No-Bob" was named both a 2007 School Library Journal Best Book of the Year and the Mississippi Institute of Arts & Letters Award for Fiction in 2008. I expect Cashay to surpass these accomplishments. This will likely be Margaret's big, breakout book. Like the previous two books, her new protagonist, the book's namesake, which translates to "treasure," is a child trapped in the toughest of times--her cherished, younger sister dies beside her on concrete by an errant bullet; her mother recklessly copes with dope to the point of parental uselessness. "We walk the same speed," Cashay tells us with great pride and hope in the book's opening sentence as she and her sister Sashay traverse the inner-city sidewalks and intersections leading to school. "Sashay looks like me, except she's pretty. She's smaller than I am and smilier. She moves like her name--all smooth and wiggly at once," Margaret writes. But the bullet too soon comes, and Cashay becomes too soon alone. This time, instead of putting us in 19th Century Mississippi, Margaret plops us right smack dab in the projects of 21st Century Chicago, a city Margaret evidently has strong connections to, as well. Margaret's deep southern heart also pounds out a mighty Chicago beat. Her prose and love of modern-day Chicago is as convincing, moving and meaningful as her paragraphs about Civil War-era Mississippi, each carefully constructed sentence--she has the gift for beautiful, tight writing, the type that seems so simple in structure but so hard to imitate--in "Cashay" is as dependable as the steadiest of heartbeats. "We step in through the right ventricle," Margaret writes near midpoint when Cashay accepts the Museum of Science and Industry's dare to walk through the pulsating heart of a twenty-eight-story-tall human. "It's crowded inside this heart. It smells of sweat, plastic, people's shoes, and morning breath. The artery lights blink on and off. A lady tells her daughter that some people get married here. Somebody's used Big Gulp cup is right there on the left ventricle." Even better, we, the reader, tour a brave, bruised heart of a witty, wise-beyond-her-years 14-year-old as she ultimately faces her sister's killer and triumphs over tragedy with help from her temporary guardian and
Trustpilot
Copyright © 2022 Thriftbooks.com Terms of Use | Privacy Policy | Do Not Sell My Personal Information | Accessibility Statement
ThriftBooks® and the ThriftBooks® logo are registered trademarks of Thrift Books Global, LLC