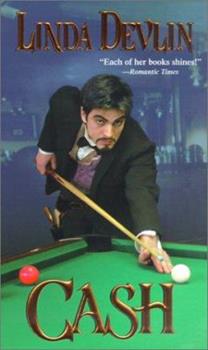 The conclusion to this series featuring six former soldiers who come to the tiny town of Rock Creek, Texas, after the Civil War. Daniel Cash is an gunslinger harboring painful memories of the girl he'd left behind when the war demanded his duty. Nadine had given up on Cash--she was too busy raising the son he doesn't know he has. She needs him now, but seeing Cash awakens feelings she thought were long dead.

A wonderful ending to this series...

Published by Thriftbooks.com User , 17 years ago
Wow! I can't believe this series has come to an end. I'm going to miss these guys & their families. At the beginning of this book you meet Nadine who has come to Rock Creek to ask Cash for his help with her son. Nadine is Cash's one & only true love from his past & she arrives with a son that he soon finds out is his own. As Cash & Nadine reveal their secrets they find themselves needing each other once again but Cash is not willing to put them in harm's way by giving them his name. Read the book to find out what happens. You won't be disappointed in this book. You see all the other five from this series in this book quite a bit & it's a wonderful closing to this series. Wish there were more. Read in order Rock Creek Six: #1 Reese #2 Sullivan #3 Rico #4 Jed #5 Nate & #6 Cash. Enjoy!

Awww! COME ON! THE END?? NOT HARDLY

Published by Thriftbooks.com User , 18 years ago
Cash, the runt, at five-eleven? What a nasty tempered yet heart-broken son of a gun.This just had to be. The only one that could tame this renegade had to be the one that broke his heart. And give him a family.Nadine at 32, is certainly his woman, and Cash at 33, refuses to be her man. Too dangerous, to much of a reputation to live down, too much of a killer.Yet you could still see that he hadn't killed his soul, yet. He had been under the influence of the other Rock Creek five. Bonded loyalty and constant friendship kept all six men from destruction. The tales of the Rock Creek Six should become classics -- Hey guys, where are the movies [although they would be hard to cast].Nadine and JD ended up turning Daniel Cash's life upside down.With some help from Jed and Hannah, little Fiona, Sullivan and Eden's daughter and JD's ambitions.I will say I was disappointed not to find that that darn tub was not made of gold. chuckle! chuckle!Great characters, Great stories, just great all the way around -- enough beer to go with the froth in Cash -- great way to end? the Rock Creek Saga [more please]HIGHLY RECOMMENDED -- fantastic keepers. Try them you will definitely like them.

A Finale Worth every Penny!

Published by Thriftbooks.com User , 18 years ago
Cash is the final installment in the Rock Creek Six series, about a band of six former Confederate soldiers who have only their bond of loyalty to each other... until one-by-one... they overcome their troubled pasts to find a future in love.Daniel Cash is the deadliest one of the bunch. He excells at womanizing and gambling, and has a well-known and well-deserved name as a gunfighter. Hurt deeply by the woman he once loved, his bitterness toward "nice" girls spills over into everything he does and is reflected in the cold lifelessness of his eyes. But, throughout the series, the reader gets glimpses of something deeper: his loyalty to friends, his sense of humor, and his pained heart. In the book, Cash, he finally finds peace by facing his past - in the flesh... whether he likes it or not - and learning that he doesn't have to face the future alone. The climactic confrontation gives a wonderful indepth look at the life of a professional gunfighter and the resulting sacrifices. It's an enjoyable end to a super western romance series. I just wish there had been more than six!

A fitting ending for a wonderful series

Published by Thriftbooks.com User , 19 years ago
The Rock Creek Six series has been one of the best romance series in my reading experience. This, the last of the six, has continued the combination of humor, romance, friendship, and family that made the previous five so enjoyable. While this book's conclusion was a little too neat and easy for realism, it was a welcome addition to my bookshelves that I know will be reread many times over the years.

Published by Thriftbooks.com User , 20 years ago
I loved this book!! After reading the other 5 in this series, I thought there was no hope for Cash. Boy, was I wrong! Like the other five, I couldn't put this book down!
Trustpilot
Copyright © 2022 Thriftbooks.com Terms of Use | Privacy Policy | Do Not Sell My Personal Information | Accessibility Statement
ThriftBooks® and the ThriftBooks® logo are registered trademarks of Thrift Books Global, LLC