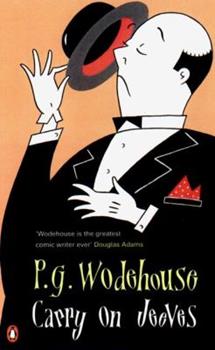 (Book #3 in the Jeeves Series)

The immortal Jeeves shimmers into the world of the Woosters, takes on Bertie and carries on from there.

Published by Thriftbooks.com User , 21 years ago
These ten short Jeeves and Wooster tales originally appeared in 1925 and three-quarters of a century later provide an excellent entry point to Wodehouse's comic series. The Jeeves and Wooster stories generally follow the same template, the young, wealthy airhead Wooster or one of his upper-crust pals gets in some sticky social situation, and it is up to his genius butler Jeeves to devise an ingenious solution to the quandary. Often the stories involve some manner of deception, misunderstanding, or often, mistaken identity-and sometimes, Jeeves' scheme backfires, resulting in even greater hilarity (although as with every comic tale, all is set right by the end). The stories can fairly be compared to contemporary TV sitcoms, as they to reply on recurring (often over the top) characters, a rarefied setting, a single type of humor, and recurring situations. Simply put, if you like one Wooster story (and don't get sick of them), you're going to like them all. Much of this can be explained by Wodehouse's mastery of the language and constant deft turns of phrase, period slang, and comic timing. Those who deride the shallow subject matter and milieu of the Jeeves and Wooster series need to recall the context in which these stories appeared. Only a few years removed from the horrors of World War I-an event that is never alluded to in the series, despite the loss of an entire generation of British young men-the stories can be viewed as a bandage of sorts, an attempt to transport the reader to a world far removed from the traumatic recovery from the Great War. Not to mention Wodehouse's clear depiction of the upper classes as wastrels and idiots of the highest order when compared to the street savvy of the servants (as exemplified by Jeeves). Of course, one doesn't read Wodehouse for social commentary or as a salve these days, but for his dry wit and keen command of the written word.

a balm and a comfort

Published by Thriftbooks.com User , 21 years ago
It's almost impossible to write funny about humor, and anyone who writes seriously about it is doomed to come off as a fuddy duddy. E.B. White, a funny writer himself, once said that analyzing humor is like dissecting a frog, in that the thing tends to die in the process and the results will be interesting only to the purely scientific mind. -Andrew Ferguson, Divine Comedy : P.G. Wodehouse's perfect pitchTwo things the critics generally agree on are that : (1) P. G. Wodehouse is one of the funniest writers in the English language; and, (2) it's almost impossible to explain why. Among the various authorities cited for the difficulty in analyzing humor are Evelyn Waugh and Sigmund Freud, themselves authors of hilarious fictions. Suffice it to say, and I mean this in the very best sense, the enjoyments of the Jeeves and Wooster stories are much the same as those of the great TV sitcoms. Wodehouse created these two great comic characters, surrounded them in each story with oddballs, plunked them all down in trying situations, and then had the inimitable Jeeves extract Bertie and his upper-class nitwit friends from their difficulties through various stratagems and diversions. Though Andrew Ferguson and others deny that there is any deeper meaning or political content to the stories, it is at least notable that the finest young gentlemen in all of England are hopelessly overmatched by life unless Jeeves steps in to save them. The resulting stories have a certain sameness to them--of course, just try watching ten episodes of Cheers in a row and see if it's still fresh and amusing in hour five--but read in moderation they are immensely enjoyable and their very familiarity becomes quite comforting. GRADE : A+

You cannot get a better introduction to English!

Published by Thriftbooks.com User , 22 years ago
I am not a native English speaker, so my vocabulary consists of what I learned in school (a long time ago), what I hear on movies/TV, and what I read. Books and films most often these days come from America, of course, so that is the version of English that I speak (albeit with an accent). Reading P.G. Wodehouse, this or any other book, shows that the English language is not confined to the transatlantic variant; it can be so much richer! Add to that the wonderful, sarcastic sense of humour the man had and you end up with a truly sensational reading experience. Of course, you do need to know a bit of the society of which he writes. It makes me wonder what youths in e.g. the U.S. today would think if they read this book.I am still looking forward to many hours of delightful reading, as I have only read a few books yet. My own introduction to Bertie, Jeeves, and the others in fact came from the excellent British TV series starring Hugh Laurie (as Bertie) and Stephen Fry (as Jeeves). If you get the chance to see it, do so.

Published by Thriftbooks.com User , 22 years ago
"Carry On, Jeeeves," a collection of ten short stories first published in 1925 involving the adventures of Jeeves and Bertie Wooster, provides an excellent introduction to the world of P.G. Wodehouse. The collection contains the first Jeeves' story, in which the valet comes to work for Bertie replacing a valet named Meadowes, evidentally a hypocrite who converted to evangelism (as we find out in the story "The Aunt and the Sluggard".) At any rate, Meadowes was sacked by Bertie when the valet was caught stealing his silk socks. The stories take place in New York, briefly in Paris, and, of course, in London, although Wodehouse, as usual, does not delineate any part of New York except to place Bertie in a flat on 57nd Street and mention Washington Square as a place of Bohemianism, and Long Island as rural countryside. The stories contain the usual Wodehousian social parasites living off wealthy aunts, and develops such characters as Aunts Agatha and Dahlia, Bingo Little, Sir Roderick Glossop (the loony doctor) and several of Jeeves' numerous relatives, including a relatively incompetent constable and female model and partime "actress." The charm of the Jeeves-Wooster stories, I have always thought, comes from Bertie as speaker, and Bertie narrates the action in nine of the ten stories. Wodehouse is at his best in characterizing Bertie: Wooster's prose tends to be rich in unusual similes, metaphors and 1920's slang; there is a cadence to Bertie's narration, as well as a refreshingly humorous charm to his perception of the world. Bertie has been termed "a useless blot on the fabric of society" by his former valet, and a "wooden-headed blighter" by others. Bertie, himself, admits to having "half the amount of brain a normal bloke ought to possess." Even the discrete Jeeves considers Bertie "mentally negliable," although, of course, this is an unspoken thought. (In the final story in this excellent collection, Wodehouse uses Jeeves as narrator, an unusual occurence in Wodehouse, but one which enriches the character of Jeeves and makes him more meaningful in later works. Wodhouse seemed to have exerted more care in the Jeeves' stories throughout his writing career. Wodehouse admits that he always took particular care to be especially humorous and witty in these stories because he thought that the reader demanded more with Jeeves and Wooster. "Carry On, Jeeves" is a highly recommended introduction into the world of Wodehouse; a first-time reader may, like most of us, become quickly addicted to Wodehouse and further explore the richly humorous world of this marvelous author. Longtime admirers will, of course, return frequently to these miniature gems.
Trustpilot
Copyright © 2022 Thriftbooks.com Terms of Use | Privacy Policy | Do Not Sell My Personal Information | Cookie Preferences | Accessibility Statement
ThriftBooks® and the ThriftBooks® logo are registered trademarks of Thrift Books Global, LLC