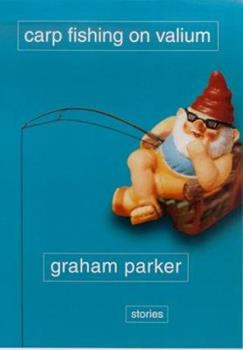 The literary debut of one of rock's most critically acclaimed singer/songwriters. For 25 years Graham Parker has rocked our world, releasing more than 20 albums, including the fabled Squeezing Out Sparks , considered to be one of the great rock and roll albums of all time. Now Graham stakes his claim in the literary world with Carp Fishing on Valium . Carp Fishing on Valium is the story of one Brian Porker, our Everyman if you will, told in a kaleidoscopic...

Be prepared for a surprise

Published by Thriftbooks.com User , 13 years ago
A series of very loosely related narratives that serve to confirm that - whether writing songs or blank verse - Graham Parker is eccentric, ascerbic and down-right brilliant at pulling at your heart strings and leg. If there is one song that I heard in my head while reading these stories, it was "You Can't Be Too Strong," his lament about abortion. You're shocked by the content and themes but yet you can related them on a multiplicity of levels. But, don't reject reading this book for fear it is heavy, depressing reading. Instead it is the life story of a sort of alter-ego of Mr. Parker named Brian Porker. The are enough similarities between the two men that you constantly risk trying to make connections between the two. I do not know if Parker grew up a military brat as Mr. Porker did. I know Mr. Parker did interact with Southside Johnny and others in the Asbury Park music mafia. I assumed as it went on for several years, it was on friendly terms. Brian Porker, on the other hand, seemed to despise the thinly disguised characterizations of Miami Steve van Zandt and Jon Bon Jovi. Other stories tell of audtioning to replace the late Mick Jagger; seeing and hearing a rocket-powered passenger aircraft lift off while fishing while high on valium and trying to save a bird in Cleveland, Ohio while on an apparently dead-end tour as a stand-up comedian. It's best to read more of this and think less about it. I do have to wonder what is Mr. Parker's view of birds. One of the early stories as well as one of the last is driven by Porker's revelation about birds; the former will almost break your heart.

Published by Thriftbooks.com User , 20 years ago
Graham Parker? The singer-songwriter behind such brilliant albums as "Howlin' Wind" and "Squeezing Out Sparks?" What's he doing writing a book? That's what I thought when I came across this book. But think about it: song lyrics are basically short stories, so why not? I was pleaseantly surprised to find a very funny, often moving, collection here. Ths book is basically a collection of short stories that follow the life of a young boy into his life as a famous rock star. Parker has a natural gift for dialogue. My favorite story by far is "Me and the Stones," in which our narrator is handpicked by Keith Richards to replace the recently deceased Mick Jagger. Sound strange? Yes, but also very funny. Buy it!

Published by Thriftbooks.com User , 21 years ago
It should come as no surprise to find that he is good with words. Graham Parker has been delighting his loyal musical fans for decades now with his own brand of integral rock and roll, a style marked by thoughtful, poetic lyrics, deft melodies, and a passionate energy. But in "Carp Fishing on Valium" Parker shows himself to be a fine storyteller too, in a series of endearing and often piercing tales ranging from boyhood escapades in Surrey, in a Huck Finn vein, to deliciously worldly-wise rock-star-on-the-road stories, with some surprisingly poignant twists. Parker's characteristic energy and fine musical ear give his prose an engaging vigor and freshness; and in these stories he shows us not only the tough kid from the south of England, with his dark, sly humor and his combative ethic, but also the vulnerable sides of a complex man, the fears, and doubts, and the touching love for nature, in stories lit at unexpected moments by a furtive, almost involuntary tenderness.

Published by Thriftbooks.com User , 21 years ago
I'm not a total Graham Parker fan but am a huge admirer of his best work. The substance of his songs, as well as their music and performance, are amongst the best I know and Parker has never had the credit he deserves, especially for his Stiff work which clearly influenced Elvis Costello. These stories show the same essentially noir sensibility -- wry, involved, bitter-sweet -- which informs the songs. After reading it, my guess is you'll want to go and listen to one of Parker's great albums like Burning Questions. On the other hand you might like to buy an album first -- and then get the book. Either way, you're in for some quality stuff. It reminds me of the vast amount of talent that flowered in the days when Notting Hill was a real place and not just a Julia Roberts vehicle. All Parker's quirky, edgy seminal music is reflected in this outstanding first story collection. Mary Morris
Copyright © 2020 Thriftbooks.com Terms of Use | Privacy Policy | Do Not Sell My Personal Information | Accessibility Statement
ThriftBooks® and the ThriftBooks® logo are registered trademarks of Thrift Books Global, LLC