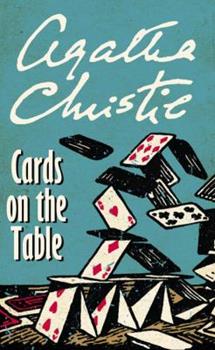 Cards on the Table

This description may be from another edition of this product. In Agatha Christie's classic mystery, Cards on the Table , the wily Hercule Poirot is on the case when a bridge night turns deadly Mr. Shaitana is famous as a flamboyant party host. Nevertheless, he...

Published by Thriftbooks.com User , 14 years ago
This book, with its initial copyright in 1936, shows Christie at the height of her powers. One of the coziest things about a Christie mystery - especially those which were written earlier - is that they are set before so many of the great advances in forensics. There's no mention of computer databanks or DNA, no fiber analysis nor hair samples. Now, I'm all for the wonderful things that can be done with forensics for capturing criminals in the real world, and these can make for fascinating reading, too. But novels are sometimes more pleasant when they don't deal with the technical side of things, but let the readers ponder, along with Christie's detective Hercule Poirot, the psychology behind the murder. In Cards on the Table, Christie sets up an imaginative, elegant, albeit implausible scenario. Four murderers - successful ones, those who have gotten away with it - are invited to dinner by Mr Shaitana, a rich eccentric who collects only the best - including collections of people. To the same dinner party this Shaitana invites four specialists in crime - a policeman, a man in the Secret Service, a writer of detective novels and of course our protagonist, Hercule Poirot. The dinner is excellent and Shaitana then makes some provocative remarks, putting the wind up in his quartet of murderers. The two groups - murderers and crime specialists - then divide into two different rooms and play bridge for the rest of the evening. Shaitana does not play, but sits in an armchair by the fire in the same room as the murderers. The evening continues until late. The crime specialists come to bid their host farewell, when lo! - to their great surprise, they find that their host has been murdered in the chair. The deed must have been committed by one of the four bridge players during the course of the evening. Christie then proceeds to reveal much about the murderers and their history. She does her best to be fair during the course of the book, putting her own cards on the table. And of course the pool of those who could have committed the crime is also limited - in another sense, the cards are also on the table. Finally, the bridge game plays a role in the assisting Poirot in figuring out whodunit. You can enjoy this book if you don't know bridge, but it helps if you do. Another advantage of this book is that there's also no appearance of the dim Arthur Hastings, for which I'm grateful. The psychology, in my opinion, is spot on in this book, and makes it one of Christie's best. My only question - and one which she did not have to answer - is to wonder if Shaitana had any plans for the end of the evening, assuming that he had survived? But Christie is not obliged to answer this question, and she does not.

Published by Thriftbooks.com User , 20 years ago
Mr. Shaitana, a wealthy collector of objets d'art, has an unusual idea for a dinner party after a chance meeting with Hercule Poirot in an art gallery. He invites to dinner four detectives plus four people he suspects may have gotten away with murder. Along with Poirot are two detectives we have met in earlier Christie works: Colonel Race, the trouble-shooter from the Foreign Office, and Superintendent Battle of Scotland Yard. Introduced in this book is Mrs. Ariadne Oliver, a best-selling mystery writer, who has been compared to Christie herself. Like Mrs. Christie, Mrs. Oliver eats large quantities of apples while writing and Mrs. Oliver's books are about a quirky Finn who is not unlike Mrs. Christie's quirky Belgian. Mrs. Oliver will return in six additional novels.The other four guests that evening are: Dr. Roberts, a successful physician; Mrs. Lorrimer, an affluent widow who loves to play bridge; Major Despard, an African and South American explorer and guide; and Miss Anne Meredith, a young lady Shaitana met in Switzerland.After dinner, a game of bridge is arranged. Shaitana directs the four detectives to one room while the other four guests play in a separate room. The host says he does not like the game so sits and dozes by the fire in the room where the four possible murderers are playing. When the guests prepare to leave later, it is discovered that Shaitana has been fatally stabbed at some point in the evening.All four detectives tackle this case in their own way. Bridge players will delight in the way Poirot handles the case. He concentrates on the game itself, the hands that were dealt, and the method of scoring. If you pay attention to the game, you just might guess the murderer. This is one of Christie's classic surprise endings and, in my opinion, one of her best works.

A brilliant muder mystery, with evedince against everyone!

Published by Thriftbooks.com User , 22 years ago
Think of it- four suspects, all with an equal oppertunity and motive to have killed the mysterious Mr.Shaitana. At several points, it seems as though you know exactly who has done it- until you find out that it was not them, but another suspect. A brilliant, though sometimes confusing plot, all come into focus by the charming personality of Hercule Poirot.

Published by Thriftbooks.com User , 22 years ago
Agatha Christie's preface to this book says it all. In most mystery novels, finding the murderer is easy; one merely has to focus upon the person who was least likely to have commited the crime. Needless to say, this is not that kind of book. The incomparable Hercule Poirot has always boasted of his insight into the criminal mind. And in this book, he discovers, perhaps, the case most suited to his method. Four murderers, thrown together by a slightly sardonic host. Each had a motive. An oppourtunity. At the end of a bridge game, the host was found dead, and one of the four did it. Hercule Poirot, once again, delves into the psychology of crime and exercises his "little gray cells". A note: At one time or another during the book, all of the suspects will seem the least likely, and most likely to have done it. Perhaps the most obvious candidate for murder is the one that is guilty. I am saying nothing more.

ONE OF MY FAVORITE AGATHA CHRISTIE BOOKS

Published by Thriftbooks.com User , 23 years ago
I was extremely pleased with Cards on the Table. The premise for the book was duly intriguing, with perhaps one of the more creative plot ideas to boot. The sleuths were intelligent and delightful, the possible murderers all sufficiently suspicious, and the victim a person who played his role to the nines.Dame Agatha made a point to say during the prologue that because you knew right away who the four possible murderers were, the element of surprise during the unmasking would be slightly less than if suspicion were cast on a whole room-full of people. True, perhaps, although not the common thread in ALL mediums. Cards on the Table, despite its aforesaid lack of surprise, does manage a neat, nice, maybe even SHOCKING unmasking of the murderer. It has no qualms about turning you around, giving you the classic Christie twist that makes you suspect each of the four in turn--and all in one chapter! You then realize that the true murderer is none other than the per! son you least suspected most--and that is perhaps one reason why Poirot was known to say it was his FAVORITE case, after all.
Copyright © 2020 Thriftbooks.com Terms of Use | Privacy Policy | Do Not Sell My Personal Information | Accessibility Statement
ThriftBooks® and the ThriftBooks® logo are registered trademarks of Thrift Books Global, LLC