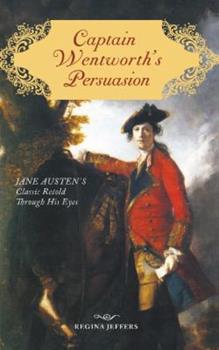 Regina Jeffers did it justice.

Published by Tainadiva , 8 months ago
I love Wentworth's point of view and listening to his voice.

Published by Thriftbooks.com User , 11 years ago
It's about time someone wrote about my beloved Captain Wentworth! I'm sorry to all the Darcy fans out there but Captain Wentworth was the best and most romantic hero from Austen. I truly enjoy reading the "retellings" and sequels to Jane Austen and I really enjoyed this one! With dozens of Pride & Prejudice sequels out there, there's only about three stories about Persuasion. I've been waiting a long time for this!! This book was both a retelling through Captain Wentworth eyes AND a sequel, which is more than I could hope for!! We are shown Wentworth's deepest emotions; his inner torments while he's away at sea and his undying love & devotion for Anne when they are finally reunited. This story goes beyond Persuasion and into the marriage. We get to see how Wentworth interacts with his own family members and how they feel about Anne as well. We didn't see that side in Persuasion. We are lucky the author remained true to Austen and her characters. Although, I will say I think the ending "got away" from the author a little. She made it a bit unrealistic. However she is completely forgiven because overall it was an OUTSTANDING novel! Maybe there'll be more stories for Persuasion now? Com'on authors out there! Let's show the world one of the best love stories out there... our Anne Elliot and Captain Wentworth!

A Romantic and Tender Retelling of Persuasion

Published by Thriftbooks.com User , 11 years ago
Originally published as Wayward Love: Captain Frederick Wentworth's Story in 2009, Captain Wentworth's Persuasion by Regina Jeffers is an in-depth and comprehensive account of Persuasion retold through the eyes of Captain Wentworth. This novel is uniquely and beautifully rendered through a series of flashbacks that portray what happened in Jane Austen's Persuasion as well as depict scenes we did not see happen, such as Anne and Wentworth's courtship and first meeting. Furthermore, Ms. Jeffers takes us beyond the time-line of Persuasion by closing her novel well after Anne and Wentworth's marriage, providing the reader with a glimpse of their happy and blissful life together. In this romantic and tender retelling Ms. Jeffers aptly illustrates many themes from Persuasion such as social class, family, and persuasion; the theme she primarily focuses on is love and marrying for love. Reading this novel is an engaging and emotional journey where the readers will witness all the sorrowful and joyful moments of Anne and Wentworth's relationship. I was able to feel just how ardently Captain Wentworth loved Anne and observe the shift of his emotions as he went from bitter and proud, to aware and determined, to tortured and jealous. I found Captain Wentworth's Persuasion to be a delightful and endearing novel. I loved how all the characters were accurately and reverently portrayed; Mary Musgrove still had her imaginary complaints, Sir Walter was as self-involved and pompous as ever, etc. In addition, I took pleasure in Ms. Jeffers's fleshed-out depiction of Captain Wentworth's brother, Edward. and I loved seeing the close and companionable relationship between the two of them. One of my favorite aspects of this novel is how Ms. Jeffers cleverly and capably included Jane Austen's canceled chapter of Persuasion as well as her rewritten ending. Since the story was told through a series of flashbacks the canceled chapter was inserted as one of Captain Wentworth's dreams. In this sequence, Ms. Jeffers displays her skillfulness as a writer and her excellent knowledge of Jane Austen. Another aspect I loved was how Ms. Jeffers included various poem excerpts as epigraphs for each chapter. I took pleasure in seeing these excerpts mirror and evoke the sentiments and emotions of the chapter that followed. All Ms. Jeffers's epigraphs were well-chosen, moving, and a lovely enhancement to the story. One of my favorite epigraphs was "When We Two Parted" by Lord Byron which I found very apropos for Anne and Wentworth. While it is true that all our beloved and favorite characters were accurately rendered in this novel, there was one scene that made me raise my eyebrows a little. The scene is one where Anne boldly and defiantly asserts herself to her father and Lady Russell. Although I can see Anne growing in confidence and developing a backbone, it seemed like too sudden a change of character in this instance. Having finally read one of Regina Jef

Published by Thriftbooks.com User , 11 years ago
WARNING! If you have read "Wayward Love" by Regina Jeffers, you have read this book because it's the same book with a different title published by a different publishing house. I ordered it thinking it was another "what-if" for "Persuasion" and now I have to send it back. I gave it 5 stars because I love this book and said so when I reviewed it as "Wayward Love."
Copyright © 2020 Thriftbooks.com Terms of Use | Privacy Policy | Do Not Sell My Personal Information | Accessibility Statement
ThriftBooks® and the ThriftBooks® logo are registered trademarks of Thrift Books Global, LLC