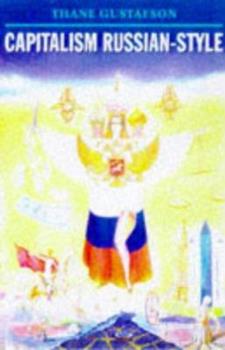 Capitalism Russian-Style provides a progress report on one of the most important economic experiments going on in the world today: the building of capitalism in Russia. It describes Russian achievements in building private banks, companies, stock exchanges, new laws and law courts. It analyzes the role of the mafia, the new financial empires, entrepreneurs, business tycoons, and the shrinking Russian state. Thane Gustafson tells how the Soviet system...

Published by Thriftbooks.com User , 21 years ago
Thane Gustafson presents an overview of Russia's experiment with capitalism to date. In this well-documented, well-reasoned report, he describes the breakdown in the Soviet economy. This collapse was already in the works when Gorbachev's efforts to reform the system brought it tumbling down. Gustafson weaves his account together like a journalist, as he discusses the heady rush of capitalism, entrepreneurism, political corruption and crime that moved into Russia's economic vacuum like a modern gold rush. He carefully traces recent developments in Russia's attempt to recover from its 1998 financial disaster.As the book describes, no one knows what will happen in Russia. Gustafson emphasizes that Russia cannot return to its command economy. The book offers cautious optimism for future business with Russia. However, the admitted uncertainty of Russia's future may frustrate readers who seek definitive answers. We at getAbstract.com recommend this book to readers interested in social and political developments and to academics as well as to executives of companies with economic interests in Russia, or those who may want to do future business there, although - for now - it may be a particularly risky venue.
Trustpilot
Copyright © 2022 Thriftbooks.com Terms of Use | Privacy Policy | Do Not Sell My Personal Information | Cookie Preferences | Accessibility Statement
ThriftBooks® and the ThriftBooks® logo are registered trademarks of Thrift Books Global, LLC