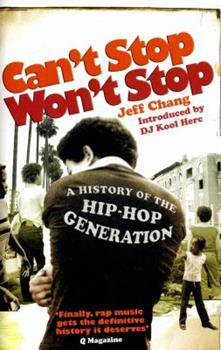 Can't Stop Won't Stop: A History of the Hip-Hop Generation

This description may be from another edition of this product. Can't Stop Won't Stop is a powerful cultural and social history of the end of the American century, and a provocative look into the new world that the hip-hop generation created. Forged in the fires...

Published by Thriftbooks.com User , 14 years ago
After reading Chang's book Can't Stop Won't Stop it is amazing how all the pieces come together. He writes with an amazing breadth that captures politics, sociology, history, economics, globalization, exploitation, capitalism, racism, media tricks, etc. and how they have all contributed to the formation of hip-hop and the resulting culture. As I came of age in the mid 90's I became transfixed with gangsta rap and inner city culture, I never realized how all the afore mentioned concepts made up an entire culture that connects with audiences all around the globe or the economics that helped regenerate a struggling economy and an evaporating job landscape. As the new century comes into full swing it is astounding to think of the power hip hop still holds and the mouths it feeds. As I dig deeper into the sociology of this last statement I can't help but think while hip hop has revived industries like music, fashion, and film and laced corporate pockets with green the conditions that breed hip hop still have not changed. The current Bush Administration is continuing where Reagan and his pops left off by gutting social programs and destroying education while offering hope through the army only to die for a country that doesn't give a damn about a better tomorrow only a richer, whiter one. Hip Hop heads are still seen as criminals in broader society, still harassed by police and still followed around the stores their culture helps feed. Perhaps Hip Hop can be the vehicle that delivers a unified front to reclaim this country from corporate interests and the carnivorous capitalist system. It has the power to reach audiences of every creed and the prophets to deliver the message. Jeff Chang is a prophet of history. Thanks for writing this book and teaching me about my past. Because if you love hip hop this history is a part of you.

the best academic Hip-Hop Book you will find

Published by Thriftbooks.com User , 15 years ago
Jeff has doen an amazing job chronicling the culture from a academic perspective with the right amount of authenticity. He is not some egghead in a tower. He has started his own label and grinded it out in Hip-Hop. But he still has the intellectual desire to examine Hip-Hop with the proper historical angle. I have read a lot of books on Hip-Hop and this is best. Amateurs - start here. Vets - brush up on your knowledge here.

A Book Beyond Hip-Hop

Published by Thriftbooks.com User , 15 years ago
Hip-Hop is such a diverse culture, with colorful personalities and artists, and perspectives that it is impossible to write a definitive book in just one volume. Jeff Chang doesn't attempt that. He goes beyond style, production, and lyrics. He delivers the much needed perspective that, even tho' it didn't give birth to it, it solidified the genre to music critics. That perspective is the Message. I read an interesting quote somewhere, which I will paraphrase, statin' that "To some 'Rapper's Delight' marked the end of the beginning and to others it was the beginning of the end." An interesting point of view since, in the beginning chapters, Jeff Chang actually echoes the latter part of that phrase. We all know the four elements - DJing, breakdancin', graffiti and MCing - but with the introduction of the emcee, the other elements have taken a backseat and, over time, have been forgotten. Chang recounts the lives of graf writers and b-boys who helped push the envelope, the party scene and art galleries, only to walk away empty handed and failed to be given the recognition they deserve. Same goes for DJs. Chang also tackles other topics, but there's three very interesting subjects that he touches on. (1) is the Ghetto Brothers, one of the gangs that formed in the South Bronx after Robert Moses' highway program altered the landscape of the borough. The gangs illustrated not only the gang culture but the politicization of young Latino and black minds that molded future phenom Afrika Baambaata. The Ghetto Brothers even recorded an album, which would be a golden listen (Chang, if you're reading, swing a copy my way). (2) was the controversy and political pressure on Public Enemy and Ice Cube, two prominent artists that held a massive amount of influence to their fans. (3) was how hip-hop crossed over to middle America with the help of YO! MTV Raps and The Source, along with the decade defining opus, "The Chronic" by Dr. Dre, which is similar to "Thriller" by Michael Jackson in many aspects, since it is an album that's universally liked, even by people who are not really into hip-hop. And since hip-hop crossed over, the politics and the monopolization that drive the industry (Telecommunications Act) and to whom the genre is packaged to. This is a must read for any hip-hop fan since it would open a broader perspective for the reader. It does have a main focus on Kool Herc, Crazy Legs, Afrika Bambaata, Public Enemy, Ice Cube & Ice-T, but it is not here to break down the lyrics to an album. It breaks down the profround effects the LA riots, the blatant racism, the influence of gang culture, the devastating impact of the crack epidemic, the peace treaties, etc., have had on the genre. You do not know hip-hop until you read this book. I thank Jeff Chang for the recollections of individuals and the refreshing of minds to those whom have gone forgotten. I love hip-hop... no matter how much I say I hate it.

Published by Thriftbooks.com User , 16 years ago
I picked up this book expecting another (yawn) re-telling of the history of hip-hop - you know the one - Kool Herc plays two records at the same time in the South Bronx and then Tupac and Biggie get shot! What I found, thankfully, is a well informed and well written book by someone who really loves and understands hip-hop, and realizes it's importance as, among other things, a youth movement and political force. Filled with everything a good hip-hop book should have - drama, discographies, quotes, and editorializing - this book deserves to be on your shelf, in between your dvd of "Style Wars" and those cds by The Coup you should be listening to!

Published by Thriftbooks.com User , 16 years ago
Unfortunately I think the previous reviewer may have missed the point of my book. As I've said, in the book and in talks I've given on the book, I never set out to do a "definitive" history of hip-hop culture, let alone one simply about rap music. I don't believe that any one book could capture the breadth and depth of the hip-hop generation's contributions to culture and politics. In 14+ years of writing on hip-hop from the street level around the globe, working (and often battling) in an international cipher of incredibly talented, passionate, and committed hip-hop artists (not just rappers), journalists, activists, writers, and scholars, I have developed a very strong opinion on this point: there are millions of ways to tell the story of the hip-hop generation. Mine is but one version. It's not "the" history, it's just "a" history. I want to point everyone to some of the incredible writing that is available-in anthologies edited by people like Raquel Cepeda, Oliver Wang, and Rob Kenner, in books by Joan Morgan, Selwyn Seyfu Hinds, Bakari Kitwana, Raquel Rivera, Michael Eric Dyson, Mark Anthony Neal, S.H. Fernando, Adisa Banjoko, and Cheo Hodari Coker, and in fiction by Danyel Smith, Black Artemis, Erica Kennedy, and Adam Mansbach. There are classics of hip-hop writing by Tricia Rose, Brian Cross, Steven Hager, David Toop, Greg Tate, Billy Upski Wimsatt, James Spady, Jim Fricke and Charlie Ahearn. As I write this, I know of future classics still coming by people like Dave Tompkins, Brian Coleman, and many others. Nor am I trying to exclude the many other worthy and important writers out there-trust me, I've only scraped the surface of this expanding field of hip-hop generation (not just rap) books. Before long, our shelves should be bending from all the great stuff. Let me talk about this book. In Can't Stop Won't Stop, I wanted to explore the notion that hip-hop is one of the big ideas of my generation. It's a powerful idea that unites us, divides us, that we feel deeply passionate about, that for many of us helps to define our identity, around the world. So what I've tried to do here is to present the emergence of the hip-hop generation, through the cultural and the political changes that we've made and that have made us. In doing so, I chose to tell many less-told stories, both because I wanted to add to the shelf of books above and because each of these stories revealed a certain truth about the generation we have come to be. I wanted the book to be a window on the last three decades of the 20th century, the so-called American Century. In another three decades, this will sound like common sense even if it doesn't right now: you can't talk about America without talking about hip-hop. And you can't talk about hip-hop without talking about America. This is why the book moves back and forth between hip-hop's content and hip-hop's context. I think they are inseparable. Understanding one only helps the understanding of the other. Persona
Copyright © 2020 Thriftbooks.com Terms of Use | Privacy Policy | Do Not Sell My Personal Information | Accessibility Statement
ThriftBooks® and the ThriftBooks® logo are registered trademarks of Thrift Books Global, LLC