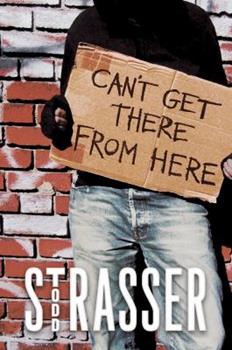 Can't Get There from Here

" "A powerful and disturbing look at the downward spiral of despair that remains too common for too many teens ("School Library Journal"). Her street name is Maybe. She lives with a tribe of homeless teens runaways and throwaways, kids who have no place to go other than the cold city streets, and no family except for one another. Abused, abandoned, and forgotten, they struggle against weather, hunger, and constant danger. With the frigid winds of...

Can't Get There From Here

Published by Thriftbooks.com User , 15 years ago
This book was very interesting. Whenever I pick up a book like this I expect it to all be great in the end, but I'm glad that this one didn't exactly tell the ending because I can't stand happy-go-lucky books where everything is perfect, la-dee-dee. But yet Maybe changes throughout the book, and that made this book fun and enjoyable. Of course, I was really sad when I thought about how this is how many people live in New York City. It just really bothers me. This was a very down-to-earth novel about a girl named Maybe who lives in New York City, and she's homeless because her mom doesn't want her. She lives with her own "tribe" of other homeless kids, and when most of them leave or die she realizes that she can't live the rest of her life like that. Because she wouldn't have a life anymore because she'll probably die before she's 18. Very quick, and an eye-opener.

A look at life on the streets

Published by Thriftbooks.com User , 15 years ago
This is a great read.The character's seem so real.You get lost in the story and feel like your one with them.They make you laugh and cry.You will hate Bobby.Yet love Tears,Maybe,Maggot,Rainbow,Jewel OG and Pest.It makes you think twice about how we might view the homeless.Yet most it tugs at your heart.A wonderful Book

I LOVE THIS BOOK!

Published by Thriftbooks.com User , 16 years ago
Can't Get There From Here By Todd Strasser, was an overall heart-touching book. It's bout a girl named Maybe who grew up in the circus and was kicked out of her home when she was 16 because there was no more room for her. Maybe moves to New York City with no home, no money, and no friends. Later, she meets a group of people that share the same similarities as her, they all live on the street with no parents, and no one who cares about them. This book will put you through all the things that she went through like the struggle and its very descriptive with pain. It changed my whole outlook on life and made me really think. You say you `hate your life' but when you read this book, you'll be so thankful that you have your parents, your family, and your friends. All of her friends turn to drugs, prostitution, suicide, or they just get sick from the cold and disease. Maybe meets a man at a local library and he saves her and one friends lives. If you like to read about teenage struggle or just struggle itself, then I do recommend this book. I was unable to put it down! It really changed my outlook on everything.

an unforgettable story of survival

Published by Thriftbooks.com User , 17 years ago
Maybe thinks she is out of choices. A young teen with a skin coloration problem living on the streets of New York, Maybe watches as, one by one, the friends she hangs with die from disease, abuse and illness. Raw and relentless, Todd Strasser brings readers right into this survival story.Other teens on the street with Maybe include Maggot, Rainbow, Jewel and then Tears, a 12-year-old runaway. Their life consists of "spanging" (begging for spare change), trying to earn money by cleaning windshields, and finding food and shelter. Getting clean is a luxury, and Rainbow and Maybe are sexually harassed when they try to clean up in a public library washroom.A night in a youth shelter shows Maybe that a warm bed comes at the price of rules, but may just be worth it. Another night in a posh club where men try to own and sell her friends makes her think that there might be a better path for young Tears.Hope comes in the form of a librarian with the same skin disorder as Maybe. She makes some calls for Tears and gives the girls food and much-needed encouragement. Then the rest of the gang begins to disperse to both good and bad places. Soon, Maybe begins to want life rather than the death she sees all around her.An excellent book with no easy answers, CAN'T GET THERE FROM HERE is unforgettable. --- Reviewed by Amy Alessio

Richie's Picks: CAN'T GET THERE FROM HERE

Published by Thriftbooks.com User , 17 years ago
" 'I'm so gross! I'm disgusting! I can't stand it!' Rainbow laughed crazily as she pulled me down the sidewalk about a block from Canal Street." 'You look beautiful to me,' I said." 'Oh, Maybe, what would you know? You're even smellier and dirtier than me.'" 'I am?' Even though I knew that all of us street kids were dirty and smelly, it still made me feel bad to hear Rainbow say it. That wasn't the way I wanted her to think of me." 'Aw, look, I hurt your feelings.' Rainbow stuck out her lower lip and pouted. 'I'm sorry, Maybe. But I'm dirty and smelly, too. We're the dirty and smelly twins!' She hooked her arm through mine and started to skip. I tried to keep up with her. It made me happy when she wanted to be with me. Then she let go and did a cartwheel right in the middle of the sidewalk. The regular people looked at her like she was psycho." Each of them has some real or imagined story about how they got there. But here they are: a small tribe of street urchins hostage to the natural and human elements of a winter on the streets in Manhattan. The story is told by Maybe, a girl with a highly visible skin condition, vitiligo, who has been here since last summer. CAN'T GET THERE FROM HERE provides a vivid portrait of being there all the time, on your own, on the street, in the filth of alleys and doorways, with the nightly fear of being preyed on and the daily tasks of survival. "Cold wind rippingdown the alley at dawnAnd the morning paper flies,Dead man lyingby the side of the roadWith the daylight in his eyes."--Neil Young "Don't Let It Bring You Down" As you could imagine this is an unforgiving environment where twenty-somethings are perceived as old and worn out and there are plenty of kids who don't make it: Yet every time CAN'T GET THERE FROM HERE threatens to totally veer toward the hopeless and morbid, we are reminded that these are kids. Real kids. Silly kids. Sensitive kids. Stubborn kids. Questioning kids: " 'Are you serious?' the man asked, nodding at Maggot's 'Money for Maryjuana' sign." 'Why not?' Maggot answered. 'If the sign said, "Money for Food," would you believe it? Least I'm honest.'" 'At least you ought to spell it right,' said the woman."Maggot turned the sign around and looked at it. 'I spelled "money" wrong?'"The man smiled. 'He's got a sense of humor.'" 'Not for long if I don't score some pot,' Maggot warned them." A quick online search finds estimates from a few years ago of 12,000-20,000 homeless youth in New York City. Nearly two-thirds are black or Latino. A disproportionate share are gay, lesbian, bisexual, or transgender, because adolescents in those groups are routinely jettisoned by their families and are frequently unwelcome in their schools or in foster homes. Many homeless teens are children of the victims of the mid-1980s crack epidemic. A study found one-third of those street kids surveyed engaged in prostitution in order to obtain money. There is a high expectation among street kids that they will contract
Copyright © 2020 Thriftbooks.com Terms of Use | Privacy Policy | Do Not Sell My Personal Information | Accessibility Statement
ThriftBooks® and the ThriftBooks® logo are registered trademarks of Thrift Books Global, LLC