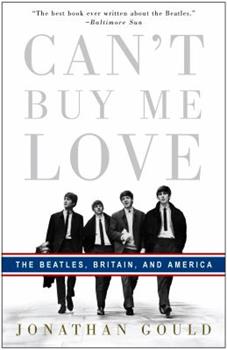 Can't Buy Me Love: The Beatles, Britain, and America

That the Beatles were an unprecedented phenomenon is a given. In Can't Buy Me Love, Jonathan Gould explains why, placing the Fab Four in the broad and tumultuous panorama of their time and place, rooting their story in the social context that girded both their rise and their demise. Nearly twenty years in the making, Can't Buy Me Love is a masterful work of group biography, cultural history, and musical criticism. Beginning with their adolescence...

Published by Thriftbooks.com User , 14 years ago
Gould, a jazz player, spent two decades on this investigation. He combines the biographical range of an author like Bob Spitz with a deeper cultural insight that parallels if not intersects with Steven Stark, and he offers, as did Ian Mac Donald, a sophisticated analysis of many of their songs from a technically adept and closely observed musicologist's understanding. Gould not only recites the familiar details, but explains their significance. For instance, Woolton is a suburb of Liverpool where Lennon was raised, but Gould places the locale in its suburban context vs. the supposedly working-class upbringing the maturing John was afforded. Instead of saying he dressed like a Teddy Boy, he goes on the place that movement within its psuedo-Edwardian origins in a war-straitened tailoring innovation that failed to catch on among the dandies so much as the sartorial rebels after the Second War. Such detail for many may be more than the reader may have bargained for, and as with the excursus upon Max Weber's theories, has surprised critics expecting another dutiful slog through accounts of Lennon wearing a toilet seat around his neck in Hamburg. Gould, to his credit, avoids the tiresome repetition. When he discusses the Maharishi and his Transcendental Meditation, he opines how the guru proved a clever salesman who did not exactly tell the Beatles that the noun was much easier to attain than the adjective, so to speak! He handles the Eastman-Klein-NEMS negotiations in the same numbing detail that Spitz had, but adds to the discussion of these necessary facts an understanding of the reasons Lennon and McCartney may have desired such legal and managerial changes, why they picked who they did, and what blunders were made by all sides. He strives for fairness, but you also realize, as with the treatment of Pete Best earlier and Alistair Taylor later, how selfish the four musicians could be as they continued, despite their own bickering as the band began to disintegrate, to remain loyal only to each other. His cultural range is vast. Isherwood, Huxley, Gertrude Stein, Lewis Carroll, Edward Lear all gain attention, and the subtitle of the book while it appears too limited, does place the band's impact solidly within their studio innovation, their send-up of show biz conventions (a particular strength of Gould's project), and their British appeal to an American audience in the post-JFK slump. You learn much about the chords, the contributions of George Martin and his team, and how songs express the tensions and joys that the Beatles were experiencing as they made their music. Compared to Spitz, as Gould tends to range over much of the same terrain inevitably, there is less about the band in their private life, and about the same attention to their public life. Less on the Apple's store and monetary problems, more on the influence of LSD on the band. Less on the goings on of the Maharishi, more about George Harrison's increasing fluency on the guitar in

Published by Thriftbooks.com User , 14 years ago
As a Beatles fan my entire life, I whole-heartedly recommend this book. I can't add much more commentary that hasn't been mentioned in the previous readers reviews, except to say, that while there are some ups and downs, as a whole, I never got through 606 pages so easily and so eagerly, as I did with "Can't Buy Me Love." The author deserves major kudos for his research and insightful comments on their music. I recommend this book for any Beatles fan.

Published by Thriftbooks.com User , 14 years ago
I teach a college course about The Beatles,and recently have re-read many of the best books about them, so when I first saw this book, I thought it would recycle the same old stories, but when I looked through it, I quickly saw the author provides much original, meaningful insight. If you're interested in the history of their music (rather than gossip), I highly recommend this.

Not just another Beatles book

Published by Thriftbooks.com User , 14 years ago
After having read maybe a thousand books on the Beatles, what a treat to find a new one that is not only well-written and intelligent, but actually includes material I had not read or heard before. Everyone will have their favorite era and favorite part, but I especially enjoyed learning more about the very early days (1960-1961) when the band were acquiring their instrumental chops and soaking up lessons in songwriting and showmanship. A great book.

let's talk about their music

Published by Thriftbooks.com User , 14 years ago
Hundreds of books have been written about the Beatles. Jonathan Gould read a lot of them and he wasn't satisfied. They talked about almost every aspect of the Beatles except they seemed to flash right past one of the most important things, the thing we remember most, the music. Gould, a musician, started this project 20 years ago. He looked at the Beatles from back at the very beginning-their roots. How did they become songwriters? How did Lennon and McCartney become such a wonderful songwriting team? Who were there major influences? He doesn't rely on the memories of those who were there 50 years ago. Instead, he looks to the original sources, the music writers and fans of that time, in the words they wrote then. He follows the Beatles course during their short but prolific time together. He looks at many of the songs and the stories behind them-the ideas that were formed in the studio and elsewhere, influences like India, drugs, women, philosophy, etc. Little tricks and accidents changed so many songs from what they might have been to something even better. Throughout he plugs readers into what was happening in the world as the Beatles were making their indelible mark upon it. 'T is a thing of beauty. These things needed to be said.
Trustpilot
Copyright © 2022 Thriftbooks.com Terms of Use | Privacy Policy | Do Not Sell or Share My Personal Information | Accessibility Statement
ThriftBooks® and the ThriftBooks® logo are registered trademarks of Thrift Books Global, LLC