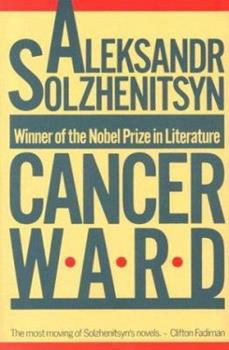 Cancer Ward examines the relationship of a group of people in the cancer ward of a provincial Soviet hospital in 1955, two years after Stalin's death. We see them under normal circumstances, and also reexamined at the eleventh hour of illness. Together they represent a remarkable cross-section of contemporary Russian characters and attitudes. The experiences of the central character, Oleg Kostoglotov, closely reflect the author's own: Solzhenitsyn...

Published by Thriftbooks.com User , 19 years ago
Those were the words that Dorothy used to describe Oz after waking up in the bosom of her family. The same intense feeling came over me while reading this book, a task that spanned several years, as I often put it aside for other things, always returning, drawn by the power of the author's prose in opening his world to us. The realness of Solzhenitsyn's worlds makes him perhaps the most accessible Russian novelist. As he described the village where Kostoglotov, the protagonist, lived, or in recounting how Ruasov, the villian/fellow victim ruined lives while justifying his actions, a vivid portrait fills the reader's imagination. The human struggle to find hope and beauty in the most tragic of settings is what this novel evokes so well. Soviet medicine, cancer, a Zek fresh from the Gulag, and in a twilight turned dawn, Solzhenitsyn finds for his semi-autobiographical protagonist happiness, not only in winning victories against a malignant tumor, but in thoughts of perhaps one more summer to live, with nights sleeping under the stars, of three beech trees that stand like ancient guardians of an otherwise empty steppe horizon, a dog that shared his life there, and of a young nurse and spinster doctor, both of whom he hoped at times to love. The picture one often got (accurately) of the Soviet Union was of greyness, gloom, uniform drabnes, and of a totalitarian police state. This book serves to remind the reader that, despite such circumstances, even desparately sick human being might still seek, and find, happiness in his own, private world. Along with that, Solzhenitsyn never lets us forget the utter corruption of the Soviet state, often in the person of Ruasov, an ailing bureaucrat who has managed to turn personnel management into an exquisite art form, as an instrument of psychological torture, slowly administered. Of all Solzehenitsyn's works, this is my favorite. The people one encounters are vividly real, and the ending isn't what one would think (or hope), but is fitting, nonetheless. -Lloyd A. Conway

The Sickness of the Soviet Empire

Published by Thriftbooks.com User , 20 years ago
Reading Solzhenitsyn's "Cancer Ward" without the historical background of the country in which it is set, a casual reader would be shocked to learn this book was banned by the Soviet government for many years. This book would seem to be nothing more than a sad story of life in a poor country's ward for terminally ill cancer patients. But through the interaction and description of the doctors and patients in Solzhenitsyn's brilliant novel, especially the loveable protagonist Kostoglotov, it becomes apparent that the ward is the Soviet system in a microcosm. With that understanding, this becomes one of the most scathing indictments of a totalitarian state written in the 20th Century. Even Orwell's great novels were not as passionately and directly damning of the Evil Empire. This is a very typical Russian novel in that the setting is very stationary, the plot is slow moving and not well-defined in many parts, but it is also psychologically deep and gives the reader an immensely profound look at the minds and souls of its characters. But what separates this from so many Russian novels, especially those of the 20th century is that it slams the Communist regime while taking a bleak, Dostoevsky-like view of man as well. Kostoglotov's experiences at the end of this book are not as cathartic as those of Dostoevsky or Tolstoy characters, but the hope that he has is clearly the same in that it stems from a source greater than him or any man. This is an emotionally challenging book and the interpretation of the ending is divisive (just read some reviews here to see both opinions), but that just adds to the genius of this book. I believe the ending is phenomenally beautiful and Solzhenitsyn at his best.This is a classic that is unfairly dismissed by today's modern, Western, intellectual elites, but its historical significance is undeniable. This book along with a few others inspired the anti-Soviet movement in the U.S., its allied countries, and the democratic revolutionaries inside of Russia in their eventually successful quest to destroy the most murderous empire our world has ever seen. "Two things he liked: a free life and money in his pocket. They were writing from the clinic, 'If you don't come yourself the police will fetch you.' That's the sort of power the clinic had, even over people who hadn't got any cancer whatever."God bless Alexander Solzhenitsyn.

Will never lose any of its relevance.

Published by Thriftbooks.com User , 20 years ago
"All I want is... to sleep on a camp-bed under the stars... to live just this one summer..." That is the simple sentiment of the patients of the Cancer Ward... expressed by one, but felt by all. Through a study of the diverse lives of the characters here assembled, Solzhenitsyn probes with searing exactitude the process of living with cancer, and more specifically, the TREATMENT of cancer in Stalinist Russia. He had reason to be acquainted with firsthand knowledge of the topic. In 1954, the 35 year old Solzhenitsyn was himself diagnosed with a rare form of cancer known as seminoma, and was admitted for radiation treatment.The importance of Cancer Ward lies in its ability for us as readers to consider that aspect of life which we all have in common... our mortality. Here we see all the possibilities of response: initial denial, hope, fear, loss of freedom, reluctance to accept treatment, despair, eventual resignation... we laugh and we cry with those who laugh and cry. These are REAL fictional people. In fact, the character of Oleg Kostoglotov is very similar to that of Solzhenitsyn himself. Kostoglotov is the optimistic realist, and one of the few who ever leave the cancer ward on their own two legs. The biographer D.M. Thomas has noted that Solzhenitsyn seemed to have defeated his cancer by his own "iron determination to live", as does Kostoglotov. Often in the novel, K is pitted against Rusinov, a high-ranking government official who has the most prolonged struggle with accepting his own diagnosis. One significant verbal exchange between the two is as follows:Rusinov: "We musn't talk about death! We mustn't even remind anyone of it." Kostoglotov: "If we can't talk about death HERE, where on earth can we?"On September 22, 1967 a session of the Union of Soviet Writers was convened to discuss the degree of censorship to which Solzhenitsyn's Cancer Ward should be subjected... some came to revile and berate him, others were there to offer a sort of restrained praise. At that meeting, the author stated: "...I absolutely do not understand why Cancer Ward is being accused of being antihumanitarian. Quite the reverse is true: life conquers death, the past is conquered by the future... In general, the task of the writer cannot be reduced to defence or criticism of one or another form of government. The tasks of the writer are connected with more general and durable questions, such as the secrets of the human heart and conscience..." After Solzhenitsyn had left to catch his train, it is reported that one of the committee members (Surkov) said: "Well, now we can relax over a few vodkas. I'll tell you what I really think. It may be that when the Soviet empire has gone the way of the Third Reich, Cancer Ward will come to stand even higher than First Circle among his novels. The latter is perhaps just a bit too enclosed, so to speak, within our political system, whereas the former, by dealing with something universal in human experience - cancer, pain, the ce

This much overlooked novel is perhaps Solzhenitsyn's best.

Published by Thriftbooks.com User , 22 years ago
Cancer Ward is often overshadowed by its predecessor, One Day in the Life of Ivan Denisovich, and its successor, the immense memoir, The Gulag Archipelago. While the worldly impact of those two works is perhaps greater, the aesthetic power of Cancer Ward is stronger than both of those works. The story is poignant and powerful, reaching out and probing deeply into the essential questions that are never answered by not only Soviet society, but western culture as a whole. The religious message that emerges is stunning and unique, recalling the works of Dostoyevsky. Overall, this is an excellent book, and any reader who enjoyed One Day or Gulag will be blown away by this work.
Copyright © 2020 Thriftbooks.com Terms of Use | Privacy Policy | Do Not Sell My Personal Information | Accessibility Statement
ThriftBooks® and the ThriftBooks® logo are registered trademarks of Thrift Books Global, LLC