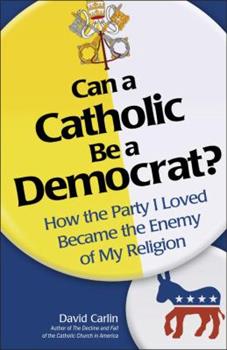 Can a Catholic Be a Democrat: How the Party I Loved Became the Enemy of My Religion

When author David Carlin was a young man, it was scandalous for a good Catholic to be anything but a good Democrat. In the pews, pubs, and union halls of America's cities, millions of poor European... This description may be from another edition of this product.

Can a Christian be a Democrat?

Published by Thriftbooks.com User , 14 years ago
This book should be re-titled to "Can a Christian be a Democrat". The author has done an excellent job of describing the conflict between Christians and Secularists. It is also, a good book on Democrat party history. He describes how Secularists came to control the Democrat party. It is not a pro-Republican or any other party book. I would recommend all Christians both liberal and fundamentalist read this book even if you are not a Democrat.

Published by Thriftbooks.com User , 14 years ago
The book is well worth the purchase price for the first three chapters alone. These provide the most insightful, accessible and succinct (75 pages) exposition you'll ever read of the mutation of the Democratic party in the 60's and 70's from representing a constituency of responsible, religiously observant working families to representing a constituency of libertines. The remainder of the text includes a clever discussion of how the "ecumenical" influence of lefty Protestant denominations contributed to the late 20th Century moral decay in Catholic institutions in the United States. I believe it was Michael Novak who, in describing the elderly Catholic supporters of John Kerry, said: "These old ladies think they're voting for Franklin Roosevelt." This book is a must read for those kind of Catholic "old ladies" of any age.

Published by Thriftbooks.com User , 14 years ago
This book helps explain why so many of my fellow Pennsylvanians (especially Catholics) continue to support and vote for Democrats. I always wondered why a person with a high moral code and strong family values would support some of the low lifes the Democrats put up as candidates of their party. Too many Catholics do not question the bad behavior of their religious and laity. Too many Catholics belong to unions and are used to being led around by the nose, told when to work, how much to work for, how much to produce, and who to vote for. These same followers, who will pay exhorbitant union dues, would do well to buy this book, read it, and then review their positions on some really important issues that affect them and their families. I would bet they will follow the path many of us have from Democrat to Republican, to "no party" while remaining active voters.

a must-read for Democrats

Published by Thriftbooks.com User , 15 years ago
This book, written by a 68-year-old Rhode Island politician who has been a lifelong Democrat, should be a wake-up call to the leadership of the national Democratic Party. Unfortunately for the party, those leaders who most need to read the book are the people least likely to do so. Their minds are closed. The book explains, in a brief and easy-to-read manner, what should be obvious -- but apparently isn't -- to leaders of the party. The Democratic Party is losing the support of church-going traditional Catholics, just as it earlier lost the support of church-going traditional Protestants. Why? Because it has taken money, lots of it (it's needed for TV advertising), from what the author calls "affluent secularists," i.e., well-to-do cultural liberals who are strongly hostile to traditional Christianity and its moral code, especially its code of sexual morality. As everyone knows, he who pays the piper calls the tune. This political alliance with America's anti-Christian forces might be a smart idea if the US were an anti-Christian nation. But since it isn't that kind of nation, it is an alliance that has produced a string of electoral defeats for the Democrats. Oh, we Dems may get lucky and win control, or at least partial control, of Congress in November of 2006, but this will do little to alter the party's long-term downhill slide. Strongly recommended.

Published by Thriftbooks.com User , 15 years ago
Today many people realize that primary political advocacy for abortion, the homosexual agenda, and the secular side of the Culture War is found in the ranks of the Democratic Party. David Carlin's excellent book explores and documents the historical, sociological, and philosophical developments which transformed the party of Andrew Johnson and Franklin Delano Roosevelt into its present day anti-Christian incarnation. Professor Carlin is uniquely positioned by birth, education, and life experience to write this significant analysis of political history. Born into an Irish Catholic working class Democratic family, he rose to high political office as majority leader of the Rhode Island State Senate. Presently, he is a professional sociologist and philosopher who has taught at the college level for the last two decades. Unlike those critics outside the Democratic Party who so often attack its anti-Christian stances today, Senator (who is also Professor) Carlin approaches criticism of his beloved party much as a wounded lover who is betrayed by his beloved. Living through this transformation to secular values as a faithful member of the party himself, Carlin witnessed over several decades the ascendancy of moral liberalism as the Democratic Party's dominant force. With the keen analytic eye of a professional sociologist and philosopher, he discerns each step in this metamorphosis to secular values, lucidly explaining this historical evolution in terms of its sociological dimensions and the unfolding inner logic which inexorably dictated subsequent developments. In the main body of the text, Carlin documents what the Democratic Party has become and why it is now utterly irreconcilable with the traditional Christianity. This alone makes this work an important contribution to present political dialogue as well as to the historical record. Still, five appendices which constitute the latter third of the book are of nearly equal importance. In these, the author deftly illumines relevant topics such as the nature and history of American secularism, the development of liberal Christianity and its connection to secularism, and a devastating analysis and refutation of Mario Cuomo's scandalous, self-serving defense of pro-abortion Catholic politicians. In a final personal note, Senator Carlin offers a somewhat surprising, yet cogent, explanation of his own present and future attitude toward his once beloved Democratic Party. This book is a good read, and an incisive expose of how today's Democratic Party has come to embrace a social and political activism alien to its own traditions and to Christianity. I strongly recommend this carefully reasoned work to all who wish to understand the origins of the ideology which pervades today's Democratic Party, as well as its probable future role in American politics. I might add that "Can a Catholic Be a Democrat?" well merits selection for sociology or political science holdings in all college and university librari
Trustpilot
Copyright © 2022 Thriftbooks.com Terms of Use | Privacy Policy | Do Not Sell My Personal Information | Accessibility Statement
ThriftBooks® and the ThriftBooks® logo are registered trademarks of Thrift Books Global, LLC