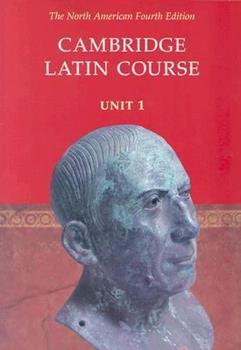 The Fourth Edition Cambridge Latin Course is an introductory program organized into four well-integrated units. Cambridge's proven approach includes a stimulating continuous story line, interwoven grammatical development and cultural information, supportive illustrations and photographs, and a complete Language Information section. Reading is the heart of the Cambridge Latin Course, and all the elements of the program - illustrations, vocabulary,...

If you would like to learn to read the Latin writers in the original, this book is the place to star

Published by Thriftbooks.com User , 13 years ago
Let's say you have read some fiction set in Ancient Rome, the Masters of Rome series by Colleen McCullough or the books of Steven Saylor, for example. Let's say you have read some history books. Perhaps you have visited some Roman Ruins. Perhaps you have even read Caesar or Cicero or Livy in translation. Now you want to read them in the original. If this describes you, then this book is for you. It is the beginning of a 4 book introductory Latin course. Each book has a theme. This first one is set in Pompeii on the eve of the eruption of Mt. Vesuvius. We observe the life of a banker named Lucius Caecilius Iucundus and his family. Caecilius was a real person: his Pompeii house was excavated and can be seen today. We read increasingly complicated stories with the help of the provided vocabulary. The style is engaging and tongue-in-cheek as it presents the life of the Caecilius household, warts and all. I thoroughly enjoyed this view of Roman society. Notice that if, as I have indicated above, your interest is primarily in learning to read Latin, then this is exactly what you want. Latin is an easy enough language for English speakers, because the roots of many of our words are Latin. If you have a smattering of a Romance language like Spanish or French or Italian, then it is easier still. Each chapter also provides background information on Roman history and culture. Eventually, however, one has to learn the conjugation of Latin verbs (four categories) and the inflections of the nouns (three declensions). And so from a gentle start, by the end of the book we must fully confront the guerilla warfare of learning grammar through tenses, cases and conjugation that bedevils the study of any language. One hopes that by reading enough texts one can pick this up intuitively as one did one's first language as a child, but this is probably a vain hope. At the end of Unit One, then, having journeyed across the pleasant plains of the easy beginnings of language study, having sadly witnessed the destruction of Pompeii and the characters we have formed a bond with, we now behold the foothills, and beyond them the snowcapped peaks, that we must scale as we move on to the subsequent Units in the course.

Published by Thriftbooks.com User , 14 years ago
I recently took a 5-week crash course in Latin, and we used the first two volumes of this series (which I remembered from my high school Latin class many years ago!). My instructor uses it for both children and adults and has had great success with it. It's a very good way to get started, particularly for those whose goal in learning Latin is being able to pick up any text and figure out what it says (with a dictionary) rather than acquiring the ability to pass an exam in Latin grammar and syntax. By getting you into reading texts right away rather than memorizing grammar and syntax charts, this book does a great job of building the student's confidence. Each stage starts with cartoons above simple sentences and then moves into a series of longer stories before concluding with grammar and syntax sections and cultural details. The stories and characters are often amusing, and there's a lot of basic information about Roman life and culture. Although a classroom setting is best for learning Latin, I suspect this book would also be very effective for those working through it on their own. Highly recommended.

Published by Thriftbooks.com User , 14 years ago
This review is on The North American Fourth Edition paperback. Firstly, I've never taken Latin before, so I haven't been exposed to Wheelock or any of the other courses out there or in a formal, structured educational setting. I have toyed with Rosetta Stone's Latin Language CD, which is also a good place to start. Back to the review. I've been looking for a decent "Beginner's Latin" book for a few years now and happened to stop at the local brick and mortar bookstore and found this treasure. I'm a designer by trade, so this book appealed to me on many levels: 1) It's visual. 2) You're launched right into a lesson in Latin. At first you find yourself looking at images and then at the sentences, trying to understand what the text really means. If you don't understand, don't worry, 3) You are presented with a vocabulary list that covers most if not all of the words in each lesson. There might be one or two that are *assumed* but it's generally not a problem. 4) There are grammar and syntax discussions and variations on translation to help students see that there is more than one way to state a concept and how to identify the best way. 5) Lavishly illustrated with drawings and photos that tell a story to help students really understand Latin in a historic context. I found after the first chapter, that I was able to understand a full segment with little effort. Great series. It is highly recommended that you pick up the North American Cambridge Latin Course Unit 1 Audio CD.

Published by Thriftbooks.com User , 18 years ago
I found this series, the 4th edition, to be especially informative because of the inclusion of history and culture of the time period, in English, as well as colour photographs. As for the format of the book, I found it to be an easy read. Almost every stage begins with line drawings ("cartoons"), which introduces grammar, characters and sets the "stage" for what is to follow. Then there are a number of stories in each stage; proved for fun group quiz games (EUGE!). At the end of each story new vocabulary is included. Also there are vocabulary checklists, which you should know, at the end of the stage. Sometimes, the vocabulary at the end of the stories appears in the checklists further along in book. If this becomes a problem, my suggestion would be to make flashcards for each of the stages (proven study aid). I do think that an improvement to later editions would be to include an English-Latin dictionary of the words used within the book, as well as pronunciation. Yet, nothing that an external English-Latin = Latin-English dictionary could not handle. Valete!

Published by Thriftbooks.com User , 21 years ago
If you are just starting ut in Latin, and you want to learn the language with and exciting storyline, useful grammar tips, and cultural information at the end of each 'Stage' or chapter, then you would like to buy this superior textbook. In a set of four, the first book contains twelve stages.
Trustpilot
Copyright © 2022 Thriftbooks.com Terms of Use | Privacy Policy | Do Not Sell or Share My Personal Information | Accessibility Statement
ThriftBooks® and the ThriftBooks® logo are registered trademarks of Thrift Books Global, LLC