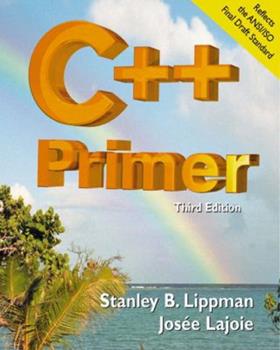 This description may be from another edition of this product. Bestselling Programming Tutorial and Reference Completely Rewritten for the New C++11 Standard Fully updated and recast for the newly released C++11 standard, this authoritative and comprehensive...

great book, but should be called C++ primer plus

Published by Thriftbooks.com User , 14 years ago
This is a great book for anyone who want to enhance his/her knowledge on C++, but this is by no means a primer book. If you are new to C++, read the book "C++ primer plus" first. It is so funny that the book "C++ primer plus" (which is also a great book) is really an introductory book. The names of these two books should be swapped because this book introduces more advanced topics and the topics that an experience programmer should know but a student does not need to. From my teaching experience in a state university, I would suggest students to read C++ books in the following order: C++ primer Plus C++ Primer Thinking in C++ (great book, free on the internet) The C++ Programming Language (by Stroustrup) Then you may want to read some books on special topics such as Visual C++, Database, etc.

It's time to upgrade!

Published by Thriftbooks.com User , 16 years ago
The previous editions (including the 3rd) of the book are all obsolete! This edition presents the language from a modern C++ perspective (post C++/98 standard), with emphasis on applications of the standard library, primarily the standard containers and algorithms. The standard library is still very under-utilized till this day, with many programmers still keep reinventing the wheels and laboring on things already provided by the library. With the C++/03/0x standard on the horizon, one is definitely much better served by upgrading to this edition and switching to the better way of programming C++ in terms of the standard containers and algorithms. By taking adantage of them, one writes more concise, more elegant, more robust, and in most cases more efficient code.

Published by Thriftbooks.com User , 17 years ago
...which is when Lippman will be releasing the 4th Edition. That will be a huge rewrite which will push the use of "modern C++" to the forefront. By "modern C++" I mean the emphasis will be much more on the use of the Standard Library and STL rather than low level constructs such as arrays and pointers. BTW, do not confuse this book with Prata's "C++ Primer Plus" which is a completely different book and generally not in the same league as Lippman's.

Pretty Good, but should change the title....(why?)

Published by Thriftbooks.com User , 21 years ago
After years of being a C++ programmer, read quite a lot of books (about 20, I think)... I considered this one as one of my favourite, that I usually refer to when I have some problem. However, this book is definitely not-for-beginner. So, some of the reader might be misleading by/confuse with its title. The writers had stated this clearly on the back cover, which said "for developers new to C++" and in the preface, which said "This book is intended as a first book on C++; it is NOT intended as a first book on programming!" (However, it's a Primer for "C++" not for "Programming" anyway :-)One big thing that made this book different from most of the C++ introductory books is, this book provided a lot of "real-world" program examples. Here, I really mean "real world", the program that you can really "use" (maybe after make them a bit more advanced/complete), like the text query system. While all other books provided some little codes to illustrate the points. Ok, that's better for those who know nothing, someone who come to C++ "from scratch", something like that... But after you finished it, you still might not get the idea of how to put them together , unless there are any bigger program to illustrate the idea.Note to those who are new to programming : Read other book first, so you won't blame on a good book like this.Note to everyone who had been misleaded by this book's title : Make sure you've read the back cover and the preface of any book before buying it, if you can... (if you can't, you have to try your luck..., good luck for you then :-)
Copyright © 2020 Thriftbooks.com Terms of Use | Privacy Policy | Do Not Sell My Personal Information | Accessibility Statement
ThriftBooks® and the ThriftBooks® logo are registered trademarks of Thrift Books Global, LLC