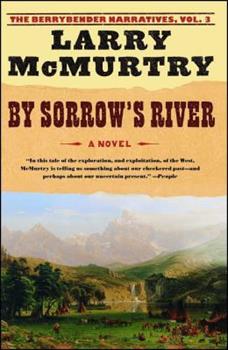 (Book #3 in the The Berrybender Narratives Series)

In this tale of high-spirited and terrifying adventure, set against the background of the West that Larry McMurtry has made his own, By Sorrow's River is an epic in its own right, with an extraordinary young woman as its leading figure. At the heart of this third volume of his Western saga remains the beautiful and determined Tasmin Berrybender, now married to the "Sin Killer" and mother to their young son, Monty. By Sorrow's River continues the Berrybender...

Addicted to an odd series

Published by Thriftbooks.com User , 15 years ago
I was hooked on the Berrybender series because of the hysterical humor in Sin Killer, so I bought the other three books in the series. I'm reading the series as one long book, and I see no other way to read it. It is, after all, just one continuous story about the same characters on the same journey. It is as continuous as Lord of the Rings or Remembrance of Things Past, both of which were published as a series of separate books. In this regard it isn't like the Kushiel series by Jacqueline Carey, because the three books in that series can each stand alone and involve completely separate adventures, though with the same characters. This, the third book in the four-book series, is not funny at all. Okay. I got hooked on the humor, and it's gone. But I'm still hooked on the characters, and in particular Tasmin Berrybender. Her stupid father I can do without. Her sisters play diminishing roles as the story unfolds. Her husband Jim Snow, Sin Killer, also has a diminishing role in this book. Pomp Charboneau is elevated to stardom, though he is a boring star, a man who doesn't really want to be alive, a man who will avoid Tasmin's advances almost all the time, but will submit passively to them when cornered. He's not much of a character. One surprise star in this third book is Clam De Paty, the French journalist with the garish red pants. He has an adventure or two. Then there's a pair of lively and wealthy Mexican girls who are pretty interesting, and one is in love with young Kit Carson, one of Tasmin's conquests. The terrifying Partezon becomes very human, and we are told what makes him tick. History proved him right. No wonder he was killing off all those white men. That was the Indians' only chance, and he was the only Indian in this book who knew it. But he peters out. So does Lord Berrybender. Sometimes McMurtry's characters just peter out. In Lord Berrybender's case, he doesn't seem like the same man who was introduced to us in Sin Killer. I don't recognize him in this book. Perhaps "continuity of character" isn't McMurtry's strongest suit in this series. He makes things happen to his characters, and the characters don't seem to be who they started out as. I suspect it is a weakness in the writing, but nobody's perfect. This series is tremendous. Pomp is a disturbing character. Why is he avoiding Tasmin? We kind of think it is because she's married to his buddy. But if that is the case, why is he having sex with her? I don't get Pomp. I think he's being painted as a broken man, broken by his removal to Europe after growing up in the American frontier. If that is the whole Pomp story, that he is an illustration of a man who was broken by civilization, then I think it is a poor choice on the author's part. I don't think people break like that. I don't think that they become apathetic vegetables because of that. It's a weakness of the story. Yay wilderness, boo civilization. Whatever. I don't buy it. This

Published by Thriftbooks.com User , 16 years ago
In 1832, Lord Albany Berrybender chartered a steamboat to take him up the Missouri River on a hunting expedition. Albany is one of the richest aristocrats in England, and also a dissolute, selfish, old fool. Along for the ride are his wife Constance, six of their fourteen spoiled children, fifteen of nineteen servants, including a cellist and a botanist, an aging parrot named Prince Talleyrand, the staghound Tintamarre, and a gaggle of American talent hired to ease their way, including Toussaint Charbonneau, the guide for the Lewis and Clark Expedition many years previous. In BY SORROW'S RIVER, a year and two books later, Lord Berrybender has since lost a leg; his wife, two children, assorted servants, Prince Talleyrand, and Tintamarre are dead. Berrybender's eldest daughter, Tasmin has borne a child to her mountain man husband, Jim "Sin Killer" Snow, and is now pregnant with a second. Another daughter, Bess, takes up with a Ute brave, High Shoulders, and a third daughter, Mary, loses her virginity to the botanist, Piet Van Wely. Berrybender himself marries the cellist, Vicky Kennet, and gets her with child. And finally, after much aimless wandering in the second book of the series, THE WANDERING HILL, the fecund group is off to Santa Fe accompanied by a ragtag group of mountain men and hangers-on. It's only in this book that the series really takes off for me, mostly due to the fact that its chief protagonist, Tasmin, is becoming engagingly difficult. Increasingly disenchanted with her husband, Tasmin casts lustful looks at Jean Baptiste "Pomp" Charbonneau, the son of Toussaint Charbonneau and Sacagawea born on Lewis and Clark's epic trek to the Pacific. Moreover, Tasmin has a soft spot in her heart for the young Kit Carson. Trouble is, Pomp has barely a prurient thought in his head, and Kit is too busy becoming a famous scout. What makes BY SORROW'S RIVER particularly interesting are the historical characters that sprinkle the narrative: Carson, the elder and younger Charbonneaus, mountain men Jim Bridger, Hugh Glass, and Tom Fitzpatrick, and traders William and Charles Bent, who established Bent's Fort in present-day Colorado. Having said that, it's because author Larry McMurtry occasionally plays fast and loose with the historical record that I found this fictional narrative unreasonably irritating at times. When reading this book, keep in mind that Carson didn't marry (his third wife) Josefina Jaramillo until 1843, and Pomp Charbonneau died in 1866 at Innskip Station, OR. Does Larry's version represent careless research, or just unconscionable literary license? With this third book in the series, the Berrybender saga is finally attaining some of those qualities of excellence that characterized, McMurtry's classic, LONESOME DOVE. Despite my reservations regarding the glaring historical inaccuracies, I just may immediately begin the fourth and final installment, FOLLY AND GLORY, without stopping to vary my reading fare. For the moment, I

"It's a poor prophet who can't even save himself."

Published by Thriftbooks.com User , 16 years ago
Now that I,ve just completed the 3rd book in the series,'By Sorrow's River',I am more convinced than ever that one benefits by getting these books together and reading them all,one right after another.Tonight is Christmas Eve and a little Elf told me that 'Folly and Glory' is awaiting under the Christmas Tree. 'By Sorrow's River' was a fascinating continuation of the spellbinding saga of the Berrybender expedition in the early West. Every page produced another glimpse of this most unusual adventure.McMurtry continues to come up with fantastic lines ,observations and soul-searching thoughts.I guess this is what makes him one of the great writers around today. A few of my favourites: "Life was never so good or so bad as one thought-" "These damnable American freedoms-this democracy!-were clearly inimicable to sound British order.Democracy could ruin a good servant faster than gin." "What a pity there are no stocks anymore." "There's no calm like the calm of a battlefield,once the killing's over." "We'll all leave husks someday,somewhere.Let's just bury them and go along." "I don't even feel that I'm in a place anymore.Places have boundaries or borders,and this goddamn place has neither." "I like to think of Eternity as having a constant temperature, though.In the great peace of infinity there should be neither hot nor cold-one can't say that of Neuvo Mexico." A great read;can't wait to read the finale!

Published by Thriftbooks.com User , 17 years ago
Well, I must concur that this the third of the Berrybender Narratives may not be the best of the three, but I still find the farcical characters and the historical characters who are woven throughout all three books memorable and generally fun. I guess you can't top Lonesome Dove in some folks eyes, but I will remember Tasmin and her scout husband for a long time as they are larger than life, just like the whole crew that travels those primitive 1830's Indian "infested" trails of the Berrybender entourage's pilgrimmage.If western fiction that contains larger than life situations and dilemmas fascinates you, this McMurtry is a suitable final installation for you. If you like to read books in a series, you must read this one to finish off this set.Again, there are gorey parts and reprehensible actions by fantastical inhumane seeming humans. But there is also solid entertainment. Dispel the winter doldrums and polish off a great writer's latest effort.

Published by Thriftbooks.com User , 17 years ago
Many people ask me just what it is I see in the works of Larry McMurtry. After all, if taken at face value, McMurtry's stories sometimes seem to be dominated by earthy, carnal themes and the trashy characters involved in them. My response to such queries is simple. As with all good literary works, I believe that one needs to look beyond McMurtry's stories and characters to the foundational dynamics that are there. "By Sorrow's River" invites the thoughtful reader to do just that. Yes there is the willful,[...]Tasmin, along with the rest of the Berrybender entourage, but there is also the innocent, constant, strong and noble Jim Snow, who, despite Tasmin's best efforts, remains his own person, living by his own creed and is never pulled down to her level. McMurtry's juxtaposition of the tawdry and the timeless explores that which is fleeting and that which is firm. Inevitably the firm and constant wins out and, like the meeting of frontier flint and steel, sparks fly. The warmth generated by such meetings is compelling and brings me back to McMurtry's work again and again and again."By Sorrow's River", along with "Sin Killer" and "The Wandering Hill", taken at face value by western "purists" (or perhaps "delusionists" might be a better description--and there is certainly nothing wrong with the delusion of the west) are likely very frustrating. But when read like all other great literature--panning through the slime and silt in search of the nuggets that are invariably there--the results can be extremely rewarding and yes, I believe that "By Sorrow's River has gold there in abundance.Those interested in western stories for the sake of western stories, in the stereotypical west where everything falls into its proper and probable place, should stick with Louis L'Amour. Nothing against L'Amour, mind you. Let's just see, accept and appreciate the differences.Douglas McAllister
Copyright © 2020 Thriftbooks.com Terms of Use | Privacy Policy | Do Not Sell My Personal Information | Accessibility Statement
ThriftBooks® and the ThriftBooks® logo are registered trademarks of Thrift Books Global, LLC