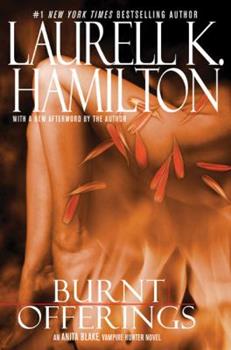 In Laurell K. Hamilton's New York Timesbestselling novels, it's often hard to tell the good from the evil. Just ask Anita Blake. She seems to be developing a soft spot in her heart for vampires-one in particular. So, when an arsonist's fires begin licking at St. Louis's undead, it's up to Anita to save the very monsters she's sworn to destroy.

The Council Comes to Town

Published by Thriftbooks.com User , 14 years ago
Burnt Offerings (1998) is the seventh Fantasy novel in the Anita Blake series, following The Killing Dance. In the previous volume, Anita killed Gabriel and Raina. With help from Edward and Harley, she also freed Jean-Claude and Richard from their captors. In this novel, Anita is hired by Captain Pete McKinnon of the Fire Department to investigate a series of unusual fires. He had been referred to Anita by Sergeant Rudolph Storr, leader of RPIT (Regional Preternatural Investigation Team). McKinnon thinks these fires have all the signs of a firebug, a pyrokinetic arsonist. He had previously encountered such a psychic talent and does not want to repeat those experiences. After McKinnon left, Anita receives a call from a co-worker asking for a ride. Larry -- a vampire executioner trainee -- had gone to the morgue to stake the bodies of two vampire victims who did not want to rise from the dead. After completing that job, a hospital attendant had wheeled in another body to be staked. Since the third body did not have the proper paperwork, Larry refused to stake it. While they are waiting for the paperwork to be recovered, Larry went to talk to the medical examiner. When he returned to the morgue, he found the attendant trying to stake the body with his own equipment. He removed her from the body, but then she tried to stake him. Anita takes Larry home and puts him to bed. Then she returns a call and learns that Nathaniel -- a wereleopard stripper at Guilty Pleasures -- has been hurt by a violent customer. Steven -- a lycanthrope from Richard's pack -- was on Nathaniel's contact list and had called Anita from the hospital. Unfortunately, Zane -- another wereleopard who is trying to protect the shapeshifters after the death of Gabriel -- is trying to take Nathaniel home. Anita has to shoot Zane twice -- with regular bullets -- to get his attention. She arranges for other werewolves to guard Nathaniel and Steven while they are in the hospital. In this story, Anita finally gets to her date with Jean-Claude at Demiche's, only to find out that the Vampire Council has sent representatives to Saint Louis. They would like to know why Jean-Claude has not taken the Council seat formerly held by Oliver. Anita meets two of the Council reps at the restaurant and is not impressed, but she does make an impression on Balthasar. Anita also meets Asher in the parking lot of the restaurant. Although he is now hostile to Jean-Claude, they had been friends before the death of Julianna. Asher had blamed Jean-Clause for her death and now wants revenge. The Council has also sent the Traveler, a vampire who is capable of possessing other vampires. He moves from body to body, taking over the minds of his victims. But the possessed ones recover when he moves on to another body. Another representative is the Master of Beasts, who can dominate any unmarked shapeshifter. Padma is arrogant enough, but his son Fernando is a full-blown sadist. Moreover,

Published by Thriftbooks.com User , 20 years ago
"Burnt Offerings" is the seventh book in Laurell K. Hamilton's Anita Blake series, and it is just too much fun to miss! Hamilton takes her readers on a non-stop, action-packed thrill ride that will captivate readers from the very first page. This book is immensely entertaining - filled with heart-pounding action and suspense and highly erotic romance. Not for the faint of heart, readers will find this book to be a truly satisfying read. The book begins as Anita, tough-as-nails necromancer and animator, agrees to help the police find a psychic firestarter. She is also policing the local werewolf pack, acting as their lupa, despite her split with Richard, the pack's alpha. In addition to this, Anita suddenly finds herself as the protector/leader of the local wereleopard pack (Anita killed their alpha, Gabriel, in an earlier novel). Then Anita's boyfriend Jean-Claude, the city of St. Louis' super-sexy Master Vampire, has his home invaded by the immensely powerful and frightening Vampire Council, the ruling body for all vampires. Anita and Jean-Claude confront them together, and must defend themselves against wild accusations claiming that Jean-Claude is a threat to the hierarchy, planning to set-up his own rival council. They also must explain how they were powerful enough to destroy a Council member some months ago. The Council members present, the Traveler, who inhabits the bodies of those around him, and Padma, Master of Beasts, and their many violent and twisted associates have been torturing and raping Jean-Claude's people. Tensions run high as Jean-Claude and Anita barter for the safe return of all their people and from that point on, the action and violence escalates.Anita and Jean-Claude aren't exactly sure what the Council wants from them, but they aren't too sure they'll get out of this alive. Richard arrives to assist them, though he is hurt and angry with Anita and the world in general. But these three must find a way to get along, because the only way that they are going to keep from getting killed is if they work together!Anita's relationship with Jean-Claude is highly passionate and actually very touching. Jean-Claude accepts all of Anita, the light side of her nature as well as the dark, and his devotion to her is really lovely. Anita and Jean-Claude's scenes together are full of passion and sensual delights for the readers. Hamilton does an amazing job of portraying all of the characters, monster or human, as rich and real individuals. Half the time, the monsters show more compassion than the humans, and Anita begins to wonder who the REAL monsters are. The character development is a strength in this book, as we learn more about not just Anita, Jean-Claude and Richard, but also the new and interesting secondary characters.Reading these Anita Blake books is pure pleasure for me! For a few hours I get to join a wild and wonderful world of shape-shifters and vampires, and pretend for a little while that I am a part of

The Older the Vampire, the More Vicious the Bite!!

Published by Thriftbooks.com User , 21 years ago
Anita Blake's life never gets any simpler. Now that she's decided to date only Jean-Claude, the Master of the City, her ex-boyfriend, alpha werewolf Richard, becomes impossible to deal with. This is understandable, but when Anita interferes in lycanthrope politics to help protect several were-leopards, Richard comes into town in a serious bad mood. Having slain Raina, the werewolf queen in the previous volume, Anita seems to have acquired a supernatural connection with the pack, and is not about to back down. But Richard's absence has hurt the pack and there is much to be undone.While Anita's relationship with Jean-Claude is going well, dating a vampire is never a simple proposition. When a romantic dinner is interrupted by several vampires from Jean-Claude's past, Anita suspects that things are about to get complicated. One of the vampires is Asher, once a close companion of Jean-Claude and now one of his direst enemies. Asher was horribly scarred at the hands of the church and blames Jean-Claude for both his deformities and the death of his human servant.But Asher is not the worst threat. Several members of the European vampire council have come to St. Louis to demand an explanation for the death of another member of the council at Anita's hands (Mr. Oliver from "Circus of the Damned"). These two are your worst nightmares come true. The Traveler, who occupies the bodies of other vampires as his way of getting around, and Padma, the Master of Beasts, who can control any lycanthrope. Both of these two are far more powerful than Jean-Claude. And far, far nastier. The master of St. Louis is facing the challenge of his unlife, with only Anita and a very reluctant Richard to aid him."Burnt Offerings" is vintage Hamilton. With Anita's relationships with Jean-Claude and Richard settled for the present, Hamilton is free to concentrate on her typically complex plot. Don't get me wrong, there's plenty of action there. But there's plenty of time for all of the regulars, from Jean-Claude to Irving the werewolf reporter to become more defined as characters. In addition, we are treated to a group of monsters horrific and perverse enough to satisfy the most spoiled of tastes. Prepare yourself for a classic sexy/scary vampire tale. You won't be disappointed.

This book was excellant!

Published by Thriftbooks.com User , 24 years ago
I loved this latest Anita Blake book. After I finished reading The Killing Dance, I wondered what would happen next. I love the contnued development of Anita, Jean Claude, and Richard. I also really liked Asher. I had wondered if Asher might make an appearance. Throughout the series Anita has developed more and more powers. I wonder if she has become too powerful, but then again her victories are all situational. The only problem is that there are a few too many plots. Ms. Hamilton deals well with tieing up the ends, but it feels as if the connection is kind of sudden. Ms. Hamilton really makes her characters live. I too wish Jean Claude were real. He is a marvelous, manipulative, sexy, and caring vampire. Ah Well. My advice is read the whole series from beginning to this latest book. You will probably find yourself reading them through a second time.

The latest in the Anita Blake series, it was worth the wait!

Published by Thriftbooks.com User , 24 years ago
"Burnt Offerings" the latest in the Anita Blake series, was so worth the wait. (dramatic sigh) I just wish that Jean Claude was real! The growing romance between Anita and Jean Claude is the hook that lures me back every time. Although I feel sorry for Richard, Anita's jilted ex, I think that she truly belongs with Jean Claude. The plot of the novel is lost a bit behind the menace of the Vampire Council's visit, but this is neatly tied up at the end of the novel. I find that Anita becomes more human the more she considers herself one of the monsters....self-doubt and all is very human. I got quite a laugh out of a master vampire's animal being a butterfly, and the humor that was a bit lacking in "The Killing Dance" is back in full force. I was a little disappointed not to see as much of Anita using her own Necromancy powers and more of her 'pack' powers instead, but this just shows the growth of the character. All in all this was a fantastic book that I will recommend and read again.
Trustpilot
Copyright © 2022 Thriftbooks.com Terms of Use | Privacy Policy | Do Not Sell or Share My Personal Information | Accessibility Statement
ThriftBooks® and the ThriftBooks® logo are registered trademarks of Thrift Books Global, LLC