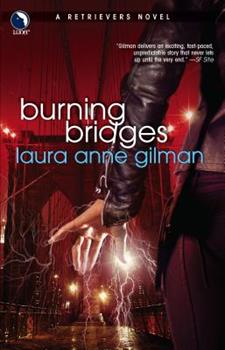 (Book #4 in the Retrievers Series)

Wren Valere used to be almost invisible. But now she's not only being seen, she's getting involved. Recent attacks against nonhuman Fatae have escalated into hate crimes against magic users in general--humans included. With the Mage Council distracted by internal power struggles, Wren is guilted into stepping up as spokesperson for the fragilely united Fatae and lonejack communities.... And, because the cosmos deems her without enough complications,...

Published by Thriftbooks.com User , 14 years ago
After reading this book, I had to go back and re-read the other books in the series. Yes, it wasn't as good as the other three, but I would still buy her next book. My favorite character in the book is PB. Hopefully, Gilman will tell us his secrets. I can't wait.

Published by Thriftbooks.com User , 14 years ago
This new Retrievers novel picks up about 6 months later after the third novel. It is winter and the war between the fatae, Talent, and Council has begun. The fatae and Talent reluctantly agree to form an alliance and work together to defeat the Council and their even greater enemy the Silence. Lonejacks are disappearing and no one knows why, and fatae are still being killed by the "pest control". But with all hell breaking loose Wren's life still manages to sink further into oblivion. Her lovelife has become even more complicated, having sex with your coworker is never a good idea, one Wren almost regrets, but not really. Until she discovers that Sergei has been keeping secrets from her, dangerous secrets. The novel builds up to the climatic ending where the fatae and Talent battle with the humans that are trying to kill them. There are survivors and there are deaths. But this is not the only sign of death in Burning Bridges. Overall a so-so book. There is too much planning and prepping for the ipcoming battle and when it finally happens there is still a lot that is left unsolved.

Published by Thriftbooks.com User , 14 years ago
The Cosa Nostradamus is the magical community consisting of three major groups; the council of mages, the lone jacks who are independent operators, and the fatae, the non-human species. Wren is a Retriever, a thief who uses her talent magic to steal things that her clients want. Her lover Sergei is a null (no magical talent) who left the organization of the Silence, a group who protect humans from larger darker forces to become an entrepreneur. Both are loners but in the present climate, Wren can no longer stay on the sidelines. For years the fae were attacked and the lone jacks did nothing and now a vigilante group founded by an unknown organization is killing lone jacks. The fatae and the lone jacks for the first time in history along with the council organize a truce to find out who the enemy is and neutralize them. When a target is killed, by nulls and those who have talent, the truce is broken and the council withdraws. However the fatrae and the lone jacks are united in their determination to strike out at the enemy while Wren and Sergei are lovers fearing every step they take will make matters worse. A confrontation is coming and when it happens it will change alliances. Laura Anne Gilman writes some of the best supernatural fantasy on the market today. BURNING BRIDGES is a fantastic urban fantasy thriller with loads of action, protagonists that are likeable and understandable and a conspiracy that hides in the shadows using disposable minions to further its aims. Wren is a strong willed person while Sergei is a tortured soul who is tugged between two opposing groups who have claims on his loyalties. Readers will await the next installment in this series to see how the coming war bears out. Harriet Klausner
Copyright © 2020 Thriftbooks.com Terms of Use | Privacy Policy | Do Not Sell My Personal Information | Accessibility Statement
ThriftBooks® and the ThriftBooks® logo are registered trademarks of Thrift Books Global, LLC