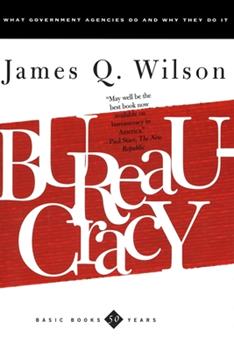 Bureaucracy: What Government Agencies Do and Why They Do It

The classic book on the way American government agencies work and how they can be made to work better -- the "masterwork" of political scientist James Q. Wilson ( The Economist ) In Bureaucracy , the distinguished scholar James Q. Wilson examines a wide range of bureaucracies, including the US Army, the FBI, the CIA, the FCC, and the Social Security Administration, providing the first comprehensive, in-depth analysis of what government agencies do,...

Published by Thriftbooks.com User , 14 years ago
I just finished a masters program in public policy, and though this book was not used in any of my classes, it was recommended reading. I have to say that it provides a great introduction to bureaucracies and why they are the way they are. (Spoiler: it's not, as many believe, because bureacrats are idiots) Coming from a background of small, private-sector organizations, this was especially useful for me. I appreciate Wilson's taxonomies of various organizations. Every political scientist has to have a 2x2 matrix to divide the world, but one of Wilson's, that divides organizations into "production," "coping," "craft," and "procedural" is particularly useful. If you are planning a career in public service, you'd do well to take some time to match your personality to the type of organization you're thinking of joining.

Published by Thriftbooks.com User , 16 years ago
Wilson, as usual, writes amazingly well in this comprehensive book covering bureaucracies, how they operate, and why bureaucrats act the way they do. He discusses the different organizational features that persist across all bureaucracies, and why it is that once a bureaucracy is created it's almost impossible to get rid of. This may pique your interest if you've been following the recent attempts to solve our intelligence problems by adding more layers of bureaucrats, as if that will somehow solve the problem. Highly recommended to all students of American politics.

Published by Thriftbooks.com User , 17 years ago
Wilson's brilliant treatise on this subject is a classic for the ages. Starting with the topic of transient nomadic dictatorships and why they are not compatible with industrialized societies, Wilson goes on to outline the machinations and internal rumblings of a run and tumble system of ruminators that we call the man. Bureaucracy is simply, Wilson argues, the culmination of people, plans, and progress, the necessity of created necessities. Hinting at what bureaucracies do and why they do it, Wilson waits till volume two to expound. A treasure. Illustrations by Mary Quigley are also insightful and full of warmth.

Published by Thriftbooks.com User , 19 years ago
This book is really a "comprehensive" (in the literal meaning of the word), clearly written, richly supported by concrete cases (mostly, federal agencies) guide about government bureaucracy mainly in the United States. From introduction to the end, Wilson clearly and convincingly demonstrates the reasons what the government agencies do and why they do that in the way they do. The book is organized into six parts: Organizations, Operators, Managers, Executives, Context, and Change. In the first part, Wilson's thesis is simply that organization matters. Organization must be in accordance with the objectives of the agency. In the second part, the author examines the operators' behavior (say, street-level bureaucrats) and how their culture is shaped by the imperatives of the situation they encounter in a daily basis. The third part deals with the issues peculiar to managers of public agencies. In this part, attention is focused upon the constraints that put the mangers in a stalemate (see chapter 7, this chapter is completely insightful!!). The fourth part is devoted to the Executives. This part clearly illustrates why the executives of government agencies compete with other departments and which strategies are used in the process of competition and/or cooperation (especially see the 10th chapter about Turf, insightful!!). In the fifth part, Wilson focuses on the context in which public agencies do their business (Congress, Presidents and Courts). In the last part, Wilson summarizes the problems and examines alternative solutions (the market alternatives to the bureaucracy) and concludes with reasonable and "little" propositions.In the book, I found especially some points very insightful to me. One of them is concerned with the distinction between government agencies. According to the typology Wilson forms the government agencies are classified into four groups. That is, production organizations, procedural organizations, craft organizations, and coping organizations. This distinction is chiefly based upon the visibility/measurability of the organizations' outputs and procedures. In this logic, the "production organization" is defined as having both measurable processes and visible/understandable outputs (i.e., Social Security Administration). "Procedural organizations" perform measurable processes, but they have no visible or easily measurable outputs. The "craft organization" is characterized by having immeasurable processes and visible outputs (i.e., the armies). However, the "coping organization" has neither measurable/controllable processes nor visible outputs (i.e., the Police Department, the Department of Education). This taxonomy is put forward and used in the rest of the book as one of the main determinants of the problems (and also successes) in the public sector. The second important and insightful point made by Wilson is concerned with the efficiency in the public sector. To Wilson, measuring efficiency is a difficult project in the publi

Published by Thriftbooks.com User , 21 years ago
Wilson's book is a breath of fresh air after years of being forced to deal with stilted rational choice texts in graduate school. Though the idea of finding a study of bureaucracy interesting seems strange, I literally could not put this book down- and not only because I am a poliSci nerd.Wilson's review of how bureaucracies make policy is pretty comprehensive- he nods at almost all of the major contributors to the discipline. For this reason the book is an excellent introduction to Political Science for someone wishing to get beyond the 101 courses. His most interesting work deals with the formation of institutional culture- how the definition of an agency's tasksm and the limitations of its capabilities influence its performance and can often produce seemingly "irrational" behavior.The most interesting thisn, however, is his discussion of how institutions and organizations develop an "ethos" or organizational culture. What bureaucrats do depends not only on what they think their priamry task is, but to a large degree on who they think they are. It is an area often neglected in the field today.Wilson is a giant, and I recommend him to anyone who is interested in policy, in academia, or outside of it.
Copyright © 2020 Thriftbooks.com Terms of Use | Privacy Policy | Do Not Sell My Personal Information | Accessibility Statement
ThriftBooks® and the ThriftBooks® logo are registered trademarks of Thrift Books Global, LLC