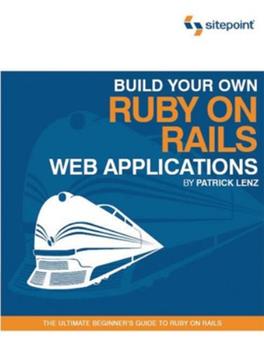 Build Your Own Ruby on Rails Web Applications

Want to learn all about Ruby on Rails, the web application framework that is inspiring developers around the world? This practical hands-on guide for first-time Ruby on Rails programmers will walk you through installing the required software on a Windows, Mac or Linux computer. And before you get coding, an entire chapter is devoted to object oriented programming in Ruby, so you'll be completely confident with the Ruby language before you begin working...

More helpful to me than Pragmatic Programmers book

Published by Thriftbooks.com User , 14 years ago
I've read both this book and Agile Web Development with Rails published by Pragmatic Programmers. Although this book has more errors, I found it to be easier to follow along with and the examples to be more practical. Agile Web Development uses an e-commerce catalog as the sample web app whereas this book uses a digg clone - more practical to developers today I think. Here are some other reasons why I prefer this book: - Agile Web Development has you create the example web application first and then tells you how the Rails framework works. This book teaches you how the framework works while you're building the sample web app. - Agile has a single chapter on testing whereas this book has you write tests as you go, which is what you would do when you actually develop an application. - It has a chapter on debugging (although it has been updated). This is an important topic I think but is hardly covered in Agile Web Development. - This book introduced me to two helpful programs - Mysql Query Browser and the Rails Console script and did so early in the book so that you can use them while you're developing the sample app. Once I learned about the Rails Console, I started using it all the time as it allows you to interact with your application from a command line and is a great tool for seeing how different objects interact with each other.

Good book for beginners, you've gotta to hold on to it however.

Published by Thriftbooks.com User , 14 years ago
I liked the book. I think it gets the point through to an RoR beginner. It does not pretend to cover everything. I applaud the emphasis on testing that Patrick has throughout. A word of advice for the reader: Hold on to the book through some chapters, like I believe chapter 8. Sometimes Patrick goes for pages without allowing you to try things out or check how the app looks. if you hold on however, things end up working out. This last one is perhaps the only gripe I have with this book: Sometimes Patrick style is too manual, and the app seems too primitive, however his emphasis on testing offsets this problem. Things the reader should not expect from this book: REST. Performance tuning for rail apps. lots of topics for beginners but which are covered in other books. No problem here, that's what the other books are for.

Published by Thriftbooks.com User , 15 years ago
First and foremost, I would like to thank both Patrick and previous reviewers for supplying such instrumental material to get me up and running with Rails. I had begun to read 'Agile Web Development With Rails' and found myself asking 'Why?' several times in response to explanations given throughout the tutorial. I realized after getting about halfway through the tutorial that I was learning Rails, but perhaps not as effectively as I could. I have more unfinished computer books sitting on my shelf than I care to admit to, but I must say that Patrick's book is the first book that I have read cover to cover in 10 years (yes, I did say 10 years). It does a tremendous job of answering the 'Why?' questions that I had that were answered what seemed like immediately after I asked them. It was as if the author knew where his students would have questions and addressed them appropriately. It was a great mix of practical Rails methodology along with software development methodology (testing, best practice, recommendations, etc). At the completion of the book, I felt like I was armed with enough knowledge to venture out into the world of Rails. This book will not (in my opinion) make you a Rails expert, but it is a very concise book that is packed with useful information that touches on all the necessities (and then some) of getting a web application setup, developed, tested, and deployed. This book also does not cover Ruby in great detail, but it arms you with most of the information necessary to use Rails. I recommend a Ruby language reference manual/tutorial in addition to this book if you really want to expand your capabilities. However, I feel that after this book I can better utilize reference books and/or online documentation to experiment and build my own applications. This book is highly recommended for those who have tried other books and stumbled. The only recommendation that I would make is to either (a) offer exercises so that the reader can experiment with the material in ways that that author sees applicable or (b) present the reader with an outline of what is going to be covered next so that the reader can attempt to implement it on their own followed by the explanation of how the author implemented it. However, the last words that I will reiterate and hope will leave a lasting impression on potential buyers is a thank you to Patrick for getting me up and running on Rails. This book has sucessfully done that for me for the first time in a technical book in 10 years!

Hands-down the best intro to Rails book on the market

Published by Thriftbooks.com User , 15 years ago
I'm a college instructor looking for a text to use in an Introduction to web development course. I've now worked through about a half-dozen beginners Rails books and this one is by far the best. The Shovell project is wonderful at demonstrating common design patterns found in web application. The coding structure is of the highest quality and the focus on testing really captures what good Rails development is all about.

Published by Thriftbooks.com User , 15 years ago
All I can say is WOW!!! I am a Ruby and Rails Newbie and I have been searching for an introductory text to both Ruby and Rails for several weeks. For context, I have moderate programming language (but minimal web development) experience. I purchased the following texts (in order): Agile Web Development With Rails, Rails Solutions, Ruby For Rails, and Build Your Own Ruby on Rails Web Applications. Each has it's strengths, and I am sure that I will be able to draw something of significance from each; however, after working through much of Build Your Own Ruby on Rails Web Applications, this is clearly the introductory text I have been searching for. The book provides a well balanced presentation and sequencing of Ruby and Rails basics followed by practical application within "Shovell" - your very own Digg clone sample application. Some key topics covered in the book: * Installation -- Complete instructions are provided for installing and configuring Ruby, Rails, and MySQL on Windows XP, Linux and Mac OS X. * Ruby basics -- this topic is presented as a minimal introduction with additional information provided as the text progresses. In fact, the entire text progresses in easily digestible, but meaningful increments which goes a long way to avoid information overload. Additionally, the Interactive Ruby shell (irb) is introduced and used to allow hands-on experimentation with the language features that are being explained. I found this very helpful in learning the basics as it allowed me to play around with the language features and answer my own questions through experimentation. * MVC architecture -- the book does good job of introducing and explaining the Model-View-Controller architecture and it's implementation within Rails without getting bogged down in extraneous theory or details. This is probably too light for experienced developers, but in my opinion, just right for the newbie. * Rails 1.2 basic features and conventions -- this is a big deal as newbies are likely to be stymied by warnings and errors associated with superceded pre-1.2 features. I know this all too well as (with other books -notably Rails Solutions) I have pulled my hair out trying figure out why I didn't get the same results that were printed in the book. Thankfully, Build Your Own Ruby on Rails Web Applications spares the newbie from this added complication. Like the presentation of Ruby basics, the Rails introduction includes the use of the Rails console which is a great way to learn the basics by "geting your hands dirty" with Rails. * Generators and Migrations -- after working through the manual creation of a few database, model and view examples (using direct SQL, and the Rails console) the book introduces the use of some key productivity tools provided by Rails -namely generators and migrations. This sequence helped me to better appreciate both the benefits (and some limitations) of these Rails features. * AJAX -- Like the Ruby and Rails topics
Trustpilot
Copyright © 2022 Thriftbooks.com Terms of Use | Privacy Policy | Do Not Sell or Share My Personal Information | Accessibility Statement
ThriftBooks® and the ThriftBooks® logo are registered trademarks of Thrift Books Global, LLC