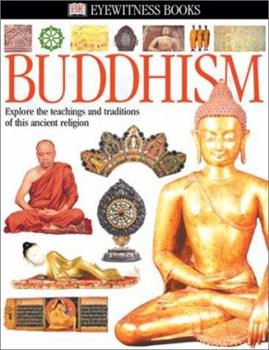 This description may be from another edition of this product. This remarkable book explores the history and practice of Buddhism, beginning with the life of Buddha and continuing to the spread of Buddhism from Asia to the Western world. Beautiful photographs...

Published by Thriftbooks.com User , 15 years ago
We were very interested in how this complicated and ancient religion would be portrayed from a Western, visiting eye. We were pleased at DK's clear delineation between the major sects were given as much devotion to detail as the sects in DK's Christian book (as well as fair portrayal in the DK Religions book!). The differences included practices by the people versus the monks, by evolution through countries, and recent adaptation to America. I don't know that the Editorial Reviewer got it right when they said the belief in afterlife was obscured. It's a Western measurement that negates what the DK Religions book and Buddhism book gives a vantage to. Very interesting stuff for those ready to move past the 9/11 God-centered/Christian-Islamic dialogue toward a more inclusive world view! Read on about Eastern religions that preceded these dialogues by a few hundred years! Very insightful!
Copyright © 2020 Thriftbooks.com Terms of Use | Privacy Policy | Do Not Sell My Personal Information | Accessibility Statement
ThriftBooks® and the ThriftBooks® logo are registered trademarks of Thrift Books Global, LLC