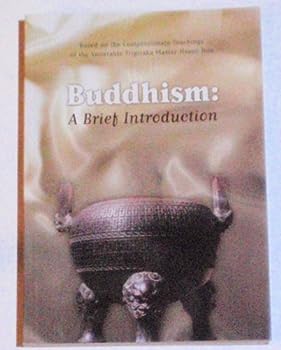 Buddhism: A Brief Introduction (Based on the Compassionate Teachings of the Venerable Tripitaka Mast

by Faculty of the Developing Virtue Seconda

In our universe there are measureless world systems which have living being in them. Yet a Budha appears in a world only once in a million years. "Buddha" literally means "Awakened One". A Buddha is a... This description may be from another edition of this product.

Published by Thriftbooks.com User , 15 years ago
In our universe there are measureless world systems which have living being in them. Yet a Budha appears in a world only once in a million years. "Buddha" literally means "Awakened One". A Buddha is a being who has fully awakened without any limitation to all aspects of reality. He understands every single internal and external phenomenon in all realms of existence from the highest heavens to the lowest hells. The Buddha's wisdom perceives everything like a bright mirror which cearly reflects all things. The light of his wisdom, which outshines the sun and the moon, pervades throughout all realms of existence so that not even a speck of darkness remains. The teachings of a Buddha are just the teachings of the way reality is. It is not an "ism", because it completely encompases all truths and all living beings. It includes all living beings because the Buddha looks upon all living beings as the same as himself, regardles of their beliefs, natures and circumstances. Therefore, in addition to his profound wisdom, a Buddha has great compassion for all beings. Rather than call the teachings of the Buddha, "Buddhism", we may say that it is the teaching of reality or the teaching of all living bengs. The wonder of wonders is that the true nature of all living beings is indeed the same as that of the Buddha. The vision and light of the Buddha's wisdom is no greater in the Buddha and no less in living beings. But because of ignorance and selfish desires we living beings do not realize it. The sun shines brightly during the darkness of night. We do not see it because the earth obscures its light. In the same way, ignorance obscures the light of our inherent, true nature. --- from book's back cover
Trustpilot
Copyright © 2022 Thriftbooks.com Terms of Use | Privacy Policy | Do Not Sell or Share My Personal Information | Accessibility Statement
ThriftBooks® and the ThriftBooks® logo are registered trademarks of Thrift Books Global, LLC