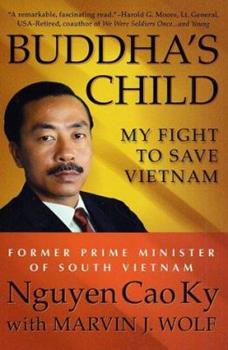 Buddha's Child: My Fight to Save Vietnam

The history of the Vietnam War has rarely been told from the Vietnamese perspective-and never by a leader of that country. In "Buddha's Child," Nguyen Cao Ky reveals the remarkable story of his tumultuous tenure as Premier of South Vietnam, and offers unprecedented insight into the war's beginning, escalation, and heartbreaking end. A thirty-four year old pilot and Air Force commander, known for his fighter-pilot's moustache, flowing lavender scarf...

Published by Thriftbooks.com User , 19 years ago
How could it be anything else being written by one of the players. I think Cao Ky Nguyen confirmed many truths and it was important for that to come from a South Vietnamese leader. All that you need to do is keep in mind that he is trying to portray himself in a more favorable light than he deserves as he was just as politically immature as the rest of the inept leaders he comments on. The American lessons from Vietnam in essence are the old sayings that you can lead a horse to water but you can't make him drink, and that if you want something done right do it yourself. When you put Nguyen's rationalizations in a more accurate perspective, he makes this clear.

I could not put this book down.

Published by Thriftbooks.com User , 20 years ago
It is hard to know where to start in writing a review about this book; in one weekend, you will learn over two decades of intricate history; so few Americans, including myself, understood the VietNam Conflict. After you read this book, you will want to go and meet the authors; it is like they are talking to you in your living room. The book is a fair review of the corruption on the South and the brutality of the north. It has numerous pearls about leadership and life as well as a great historical read.

Published by Thriftbooks.com User , 20 years ago
This is a must-read book for those who want to understand that period of history when the United Statesbecame mired in the Vietnamese quagmire. It is an easy read, despite some obvious spelling and grammatical errors,and it is a unique look into the life of one of the most colorful players in the Byzantine game of Vietnamese politics of that era.Westerners, usually from the media but also others as well, often describe Nguyen Cao Ky as flamboyant,when they are not using other words such as "swell-headed" or "shallow". He lives up to his reputationin this book, and some of the stories that he tells, from his courtship of a young woman in the seaside town of Nha Trangto his dealings with American generals and politicians, are indeed fascinating, even if some anecdotes are notsufficiently detailed. The book is rather thin for this genre, but there is no presumption that it is scholarly, or that it should be pored over by academicians in search of another explanation as to why the most powerful country in the world could not overcome the Communist violent takeover of South Vietnam. Rather, it presents the point of view of a manwho at a young age came to lead his young nation in its darkest moments. History is not kind to losers, and we in America have a tendency to think that the good guys usually win. But oncein a while, those who were defeated have a decent story to tell, and Ky is trying to do that with his book. He explainsthe dilemma of Vietnamese patriots who wanted to fight against the French but could not swallow Communist ideology, even at the cost of a twenty-year civil war. He is most clear-sighted when he points out that a good majorityof the South Vietnamese leadership consisted of French-trained men who took greed, religious, and regional rivalries toextremes, even at the detriment of their struggling nation. He also asks some interesting questions that beg for answers fromthose who had a hand in conducting the war in this country: at the start of the 1968 Tet offensive, why did US forcesnot come to the help of their South Vietnamese allies until the morning after? Why did the US wait until 1968 to begin giving more modern weapons to the same allies, while the Communist soldiers from the North had the best from Soviet and Chinese arsenals? At the end of the book, Ky pleads for the Vietnamese diaspora, which numbers some 3 million people living outside of theirnative country, to forgive and forget because the old Communist hard-liners in Hanoi are disappearing through natural attrition.He wants the younger generations to go to Vietnam to help their counterparts inside the country rebuild it. But as a man who hastraveled widely throughout the world since the fall of Saigon, it is telling that Ky himself has not found the time to go back to the country of his birth.

Published by Thriftbooks.com User , 20 years ago
This is the long-overdue story of a most unusual man. If top US officials like President Lyndon Johnson and Gen. William Westmoreland had listened to Nguyen Cao Ky when he was prime minister of South Vietnam, the war would have ended years earlier and with far less loss of life on both sides. Told in Ky's no-bull, straight-from-the-heart conversational style, this book has an arc and an epic sweep that ought to be adapted for the screen. The book describes the adventures of a strong, brave and very smart man as he tries to run a country, fight a war and make the lives of his countrymen a little better. Unfortunately, he was surrounded by thieves, jerks and politicians, each with his own agenda, and he must deal with them in addition to all his other problems. . Had Ky been a little more experienced in the ways of the world, and had he paid less attention to his heart, which looked for the good in people, and more to his head, which saw very clearly what needed to be done, he might have succeeded in turning South Vietnam into a functioning state in equal partnership with America. Instead, he allowed himself to be persuaded into turning the country over to a man whose overriding ambition was to enrich himself. A lesser man might make excuses, but Ky is very frank about his own shortcomings. By turns a hair-raising action-adventure story and a political thriller, in the end this dramatic story ends in tragedy for Ky, for the people of South Vietnam, and for the U.S. Anyone who seeks to know just what went wrong in the long struggle to stop the communist takeover of Vietnam needs to read this book. I couldn't put it down, and when I came to the part where Ky descibes his flight into exile, I had to cry.

Published by Thriftbooks.com User , 20 years ago
Came the moment, came the man. Nguyen Cao Ky was a 34-year-old Air Force pilot with no experience as a politician when his fellow generals asked him to take the thankless job of prime minister and run South Vietnam. Ky accepted the job, not out of ambition but out of his sense of duty. Over the next 18 months he welded together a phalanx of feuding warlords into an efficient, relatively honest and effective government. He made serious efforts to stamp out corruption, he put down a rebellion that threatened to tear his country apart, and he found time to fly combat missions against the enemy. "Buddha's Child" is the story of how the right man came to power at the right time -- and failed, because he was just too nice. Yes, this is the same man who turned down millions in bribe money and allowed the richest Chinese in Saigon --one of the most corrupt and venal of a notably greedy and meritritious group -- to be tried, convicted and ultimately shot for his crimes. It is the same man who secretly moved thousands of Vietnamese Marines from one end of his country to the other to put down a revolt by troops loyal to a warlord instead of him. But in the end, betrayed by what he calls his "Buddha heart," he stood aside and allowed his most vexing political rival the opportunity to become president. Had Ky been ambitious or had he sought wealth, he would never have allowed Nguyen Van Thieu to take power. But Ky is open about his mistakes, open about his lack of experience in politics. He stands up and takes responsibility for allowing things to go wrong. This is a sweeping tale of personal valor and high adventure and dripping with the names and inside stories of some of the past century's most famous and powerful figures. Lyndon Johnson, Richard Nixon, Henry Kissinger, Robert McNamara, William Westmoreland, Maxwell Taylor, Henry Cabot Lodge, Jr. -- Ky knew them all, and well. Yet this man who walked with captains and kings emerges as a wise, avuncular figure who seems to know exactly how to navigate the currents of history. Do yourself a favor and read this book.
Trustpilot
Copyright © 2022 Thriftbooks.com Terms of Use | Privacy Policy | Do Not Sell or Share My Personal Information | Accessibility Statement
ThriftBooks® and the ThriftBooks® logo are registered trademarks of Thrift Books Global, LLC