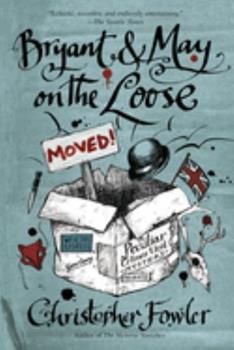 Bryant & May on the Loose

The Peculiar Crimes Unit is no more--disbanded, finished, kaput. After years of defying the odds and infuriating their superiors, detectives Arthur Bryant and John May have finally crossed the line. While Bryant takes to his bed, his bathrobe, and his esoteric books, the rest of the team takes to the streets looking for new careers--until one of them stumbles upon a gruesome murder. Now the Unit is back for an encore performance--in a rented office...

Not the best in the series, but still well worth reading

Published by Thriftbooks.com User , 12 years ago
Number seven in this series finds Bryant, May and the rest of the Peculiar Crimes Unit of the London police tossed out of of their offices and left without jobs. The PCU has shown up the Metropolitan Police one too many times, and failed to curry favor with powerful contacts in the Home Office. When one member of the team discovers a beheaded corpse in the King's Cross area, the team comes together again to investigate, though without any official sanction or access to police resources. As usual, Arthur Bryant veers off on his own tangents, becoming fascinated by reported sightings of a man dressed as a stag. Bryant believes that the man/stag and the beheading (which becomes multiple beheadings) are connected to the ancient history of underground wells, tunnels and temples in the neighborhood that are being threatened by a huge development project connected with London's award of the 2012 Olympic games. The quirkiness of this series is present, as usual, in this book. The plot didn't seem quite as interesting as usual to me. For those with an interest in history and archeology, the book includes a wealth of information about London's early history and the artifacts that lie beneath the buildings and streets. It's not very important to read this series in order, but if you want to start at the beginning, that would be FULL DARK HOUSE, which I highly recommend.

Published by Thriftbooks.com User , 12 years ago
If you love London, if you love little known facts about an area - you'll love this series. I read this latest installment of the Bryant and May mysteries in one sitting and my only disappointment was that the next volume isn't out yet so that I could keep reading on. There are not many mysteries I read again and again, but the Peculiar Crimes Unit (Bryant and May) is one that I will re-read many times. Mr. Fowler has a great way of giving historical facts wrapped up in page-turning entertainment. This is one series I hope never ends!

Now is the time to start reading this unique, addicting and well-written series

Published by Thriftbooks.com User , 12 years ago
Arthur Bryant and John May are the senior detectives of the Peculiar Crimes Unit. Actually, make that the former Peculiar Crimes Unit. The PCU (of which Bryant and May have been members since World War II) has been disbanded --- at least in the de facto sense --- as of the beginning of BRYANT & MAY ON THE LOOSE. Its cases, some of which are documented within the pages of the six volumes that precede this one (and many others that are only alluded to), are the most eccentric that the city of London has ever experienced, equally grounded more often than not in the distant past and the immediate present. The success of the PCU in solving them has become something of an embarrassment to the London police as well. Then there's the unique oil and water chemistry of the PCU's senior detectives. Bryant is unable to remember where his shoes are, yet he can recall the most arcane fact regarding the Roman occupation of Britain, who fought in what war and where, and all the legends that have arisen in their wake. May is more thoroughly grounded in traditional police work. There is no room for either of them in the 21st century. Bryant is more or less put to pasture while the rest of the team finds itself cashiered out as well and begins looking for different work in other fields. So it is that BRYANT & MAY ON THE LOOSE becomes a perfect jump-on point for those unfamiliar with this excellent series of novels by Christopher Fowler, which combine historical esoteria, sharp characterization and droll humor sprinkled seemingly at a frequency of one chip per paragraph and baked into a puzzling, intriguing mystery. The mystery in this case is the discovery of a headless corpse in the freezer of an abandoned shoppe. The crime is disturbing enough, yet it is the location of the body --- King's Cross, the British gateway to the 2012 Olympics --- that causes the Metropolitan Police and the British government to consider the unthinkable: the reunion of the PCU. When yet another headless body is found, accompanied by a detached head belonging to a different corpse --- and on a construction site, no less --- it causes the government to reluctantly (and unofficially) bring the PCU back together. Bryant remains the only holdout, content to live the life of a recluse among his arcane books and almost indescribable souvenirs. But he is drawn back into the thick of things only by the reported sighting of a man dressed as a stag carrying off a young woman. For him, the occurrence relates back to the origins of King's Cross and, in ways that are clear only to himself, the discovery of the mutilated bodies that threaten to unearth the plans of Europe's largest commercial developmental renaissance. And he is right, of course, though not entirely how he originally thought. As Bryant goes from being a reluctant participant to an extremely active pursuer of the truth, the reader is treated to a tour de force of the history and legends of one of the world's greatest cities, ev

Published by Thriftbooks.com User , 12 years ago
With the dissolution of the Peculiar Crimes Unit, the eleven living members (to include the cat) feels good about what they accomplished and assume their one deceased member looks down on them fondly. However each will miss this peculiar team as the camaraderie between the misfits assigned here was stratospheric as was their success rate. Senior Detectives Arthur Bryant and John May react differently to the end of their police careers. Whereas the depressed former hides under the covers with his books as companions the latter considers going private. However, all changes when a half man-half stag apparently abducts women followed by the finding of a severed head corpse found in King's Cross. May eloquently points out to the Home Office bureaucrats that if the crimes are left unsolved it could paint a nasty picture of London just before the 2012 Olympics come to the city. Reluctantly the brass authorizes the PCU to work on the severed head case for a week, but with conditions. They have no access to the "real" police, no official authorization, no computers, and no running water toilet in the rental dump provided to the PCU team. May reassembles the team, but a grateful Bryant focuses on the headed stag-man rather than the homicide. The seventh PCU zany police procedural is the usual insane mix of humor with the criminal absurd in what is always a super read. May is his usual optimistic self while Bryan remains the pessimist. However what makes their case so much fun is Christopher Fowler slices the top off of the glass so it is full. Fans will relish the return in the aptly titled BRYANT & MAY ON THE LOOSE; as the bureaucrats and politicians have as much to fear from this duet as the felons. Harriet Klausner

"Is this case complicated, or am I getting old?"

Published by Thriftbooks.com User , 12 years ago
In Christopher Fowler's "Bryant and May on the Loose," the members of the Peculiar Crimes Unit are unemployed, after being forced to vacate their offices at Mornington Crescent in London. The PCU was designed to handle "specialized cases and crimes (mostly homicides) which could be considered a risk to public order and confidence if left unresolved." However, the "anti-establishment and subversive behavior" of its detectives repeatedly landed the PCU in hot water with the Home Office, and it was only a matter of time before angry higher-ups disbanded the unit. Meanwhile, the PCU's most senior detectives, Arthur Bryant and John May, are handling their new status very differently. John, who remains dignified and composed, is doing his best to comfort his disconsolate granddaughter, April, who loved working in the PCU. On the other hand, Bryant spends endless hours wallowing in self-pity and irritating his beleaguered housekeeper, Alma. Arthur stubbornly refuses to answer the telephone or leave his house; every day, he looks more aged and shriveled, like "a frightened monk." Fowler starts out promisingly, with a delightfully droll hand-written note left for the successors to the PCU. The new tenants are warned about such things as "the funny smell in the crisper" of the refrigerator: "It's been like that ever since Mr. Bryant left a foot in it." There is no question that the quirky PCU (and especially the eccentric Arthur Bryant) do not fit into London's idea of modern policing. Officials in the Home Office care more about statistics, image, and conformity to standard codes of conduct than they do about results. Unfortunately, with no equipment, money, status, or technical backup, it seems that the PCU is gone for good.... Or is it? Fortunately for our team, several bodies turn up in a strategically important part of London--King's Cross--which is in the midst of an expensive redevelopment project. If word were to get out that there is a dangerous killer on the loose, panic could ensue. Who better to take care of this nasty problem than our old hands from the PCU? Hurriedly, Bryant, May, and their colleagues reconnect and put their heads together. For Arthur, this inquiry is a new lease on life and an opportunity to flaunt his arcane knowledge of his beloved city's geography, myths, and pagan rituals. Although it is a treat to spend time with Bryant and May, DS Janice Longbright, forensic pathologist Giles Kershaw, DC Colin Bimsley, and Sergeant Jack Renfield, among others, the case that they tackle is even weirder and more confusing than usual. It features such disparate elements as a man prancing around dressed as a stag, decapitated corpses, and a psychotic and brazen villain with an unquenchable thirst for mayhem. The second half of the book slides inexorably downhill, as we are subjected to an endless recitation of arcane legends and far-out theories that, more often than not, lead to dead ends. Although Fowler's trademar
Trustpilot
Copyright © 2022 Thriftbooks.com Terms of Use | Privacy Policy | Do Not Sell or Share My Personal Information | Accessibility Statement
ThriftBooks® and the ThriftBooks® logo are registered trademarks of Thrift Books Global, LLC