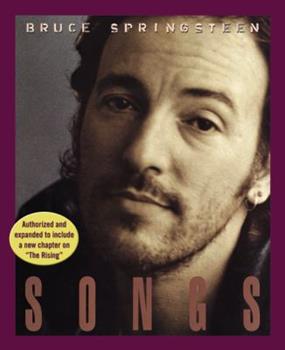 Revised to include an original autobiographical introduction by Bruce Springsteen and a new chapter featuring all of the lyrics to his most recent Grammy Award-winning release, The Rising, as well as 32 pages, of never-before-seen photographs. This is the complete collection of Bruce Springsteen's recorded lyrics, illustrated with hundreds of never-before-published images from some of rock & roll journalism's greatest photographers, including Annie...

Springsteen's short essays and song lyrics up to 1998

Published by Thriftbooks.com User , 18 years ago
"Songs" is available in both softcover and hardcover formats, with very different prices for each. If you want to spend a higher amount for a beautiful hardcover, here it is, or if you want to own the book for more of the content and to save money, there is a softcover version. I own the hardcover and am enjoying it very much. The paper is thick and glossy. This is a very hefty tome. The hardcover with its' large format pages does make for a great coffee table book.As a preface to each album's lyrics, Bruce provides a short essay about what was going on with his life and what his idea for the message of the album was. There are great photographs throughout. Sometimes there are color photocopies of his handwritten lyrics, taken from the spiral notebooks that are his "blank slates". I really enjoyed reading the songs whose original lyrics were different, and the places where he inserted 2 or 3 different adjectives as he tried to find the best one for what he was trying to convey. I especially enjoyed "Candy's Room" as it is one of my favorite songs, and I was surprised to see that the original lyrics were quite a bit different and I got a gist for the original intent of the meaning of the song vs. my own interpretation of the final product, which were two different things.Artistically, the book could use some improvement; after all, this is a coffee table book! The font is very plain for the lyrics of the songs, and the same font is used for every song, and every page of lyrics has a plain white background. I assumed since this is a coffee table book that the text would have been stylized a bit, perhaps with different fonts for each album or for every song, to match the mood of the song or such. For example, the printed lyrics in "The Rising" CD special edition package are printed with a very funky font (which are actually a bit hard to read when printed with such tiny font). Where in the CD case I am fine with clearly printed, plain style tiny font, I thought this large format book would have used the space and artistic flair to stylize it up a bit, as was done with "The Rising" lyrics inside the CD package. Another way the book could have been stylized more is to have the background of the song lyrics not plain white but at least a color or having a textured look, a border or a collage of sorts, with small photographs around it or something to jazz up the look of the pages. However, with it the way it is, with plain font on white paper, it allows for clear reading and forces the words to stand on their own and for what they are. Without clutter, we are easily able to use our imagination and form our own opinions. Perhaps that is what Bruce Springsteen wanted for us: to have his lyrics speak for themselves, to not overload our eyes and mind with images, to have a clear canvas and allow our own minds to use the words to form our own thoughts and images. Despite my desire for it to be more artsy, I love the book and am treasuring it. This is about l

Springsteen On His Songs

Published by Thriftbooks.com User , 20 years ago
Songs by Bruce Springsteen is a great coffee table book. There is not much to read in the book, although Mr. Springsteen does provide some insights into the songs, it basically consists of the lyrics to all his released songs with a generous amount of pictures. The pictures are superb and the presentation is impeccable. Some original handwritten lyric sheets are also included. The book is really for hardcore fans and if you are one, you will not be disappointed.

Published by Thriftbooks.com User , 22 years ago
Having not followed The Boss in sometime, it was a great treat to thumb through the book and remember where I was when the song came out. I was also impressed with his interpretations of the songs and was delighted to discover I was on the same thought wave as he intended the listener to be. This is a "must have" for any true Springsteen fan.

A "must have" for diehard fans of Springsteen!

Published by Thriftbooks.com User , 22 years ago
If you are a big fan of Bruce Springsteen, you *must* own this book. Yes, it has the lyrics to all his released songs, but it also has handwritten drafts containing alternate lyrics, which are a fascinating look into his songwriting process. Bruce also writes briefly about each album, although one wishes they were longer. There are also dozens of great pictures not found anywhere else.There are always cynics, but Bruce is exactly as he appears to be. Sure he is a rich rock star, but he remains true to his roots, and true to his artistic vision. If he was so interested in money, would he have played two 2-1/2 hour shows in Asbury Park, NJ this past week, with all proceeds going to charity?? I think not!

It is the ultimate accesorry for a die hard Bruce fan.

Published by Thriftbooks.com User , 23 years ago
I got "Songs" as a brthday gift. I have since read through it several times, enjoying every page. I love the way the lyrics are presented, and the book's pictures are fantastic. I would have liked for Bruce to write a little more about his work, but what he did put in was great. It allowed me to see things a little more from his perspective.
Copyright © 2020 Thriftbooks.com Terms of Use | Privacy Policy | Do Not Sell My Personal Information | Accessibility Statement
ThriftBooks® and the ThriftBooks® logo are registered trademarks of Thrift Books Global, LLC