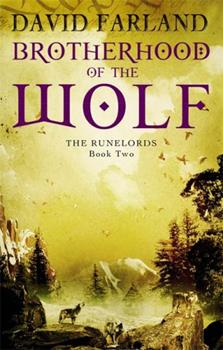 Brotherhood Of The Wolf: Book 2 of the Runelords

This description may be from another edition of this product. Volume Two of "The Runelords" Raj Ahtan, ruler of Indhopal, has used enough forcibles to transform himself into the ultimate warrior: The Sum of All Men. Ahtan seeks to bring all of humanity under his...

Published by jojoty2 , 9 months ago
While the magic system in this series is very unique it also works against the story because the runelords just feel way too powerful compared to everyone else. None of the characters are very relatable. Everyone feels much larger than life. The plot moves so slowly I felt myself counting the pages. The world of the story is not terribly interesting or deep and the violence is just so over the top and disgusting at times. A man has his private parts ripped away by the villain's bare hands. Makes you worry about what thoughts are going through the writer's head. Actions scenes are entertaining enough I guess.

Published by Thriftbooks.com User , 18 years ago
It took some time before the action picked up, but once it did the tension never let up. It was a great read. The pace of the story continues at breakneck speed. The events all take place over a little more than three days. The fast pace of the events lends a sense of urgency to the book. The characterization has improved with each of the main characters becoming more fully fleshed out. Gaborn's stubborn insistence on torturing himself for his inability to protect all of his people can be tiresome however. One thing I noticed that is so often missing from other fantasy novels is the inclusion of minor characters that have real personalities and real motivations. So often these one scene characters are used just to push a plot line along or to give the main characters something to do. I found the elderly woman who refused to leave her home in Sylvarresta touching and fascinating, there are dozens of very minor characters that are more than just two dimensional they resonate as fully formed characters in their own right. The system of magic is fully developed and internally consistent. The concept of using 'endowments' from donors to strengthen human attributes is both a plausible magic system and useful in defining the military actions undertaken by both Gaborn and Ahtan. Farland thrusts Gaborn and his other point-of-view characters from one dilemna to the next, never giving them or the reader the opportunity to pause or put the book downI look forward to learning more about dedicants and what motivates people to cripple themselves for the sake of another. It would be very interesting to have a viewpoint character wrestling with the decision to provide an endowment and gain some understanding of what that means to that person and why they would do such a things.One of the emerging strengths of this series seems to be the inhuman Reavers. Rather than simply making them mindless evil monsters Mr. Farland is providing them with a society, a history and a form of magic unique to them. Wile I doubt that these creatures could ever become sympatric it is good that we are given an insight into what their world is like and why they are invading the surface world at all. Another strong aspect is the character of Raj Ahtan. In my review of the first book "Runelordes," I complained that Raj Ahtan was a little too stereotypical in his hunger for power and glory; this has been corrected as we learn more about this man's history and his obsession with becoming the sum of all men. It is a rare achievement when the quality of a series goes up with the publication of the second book.

Published by Thriftbooks.com User , 20 years ago
In my review of "The Sum Of All Men", the first volume of the Runelords series, I pointed out that Farland's well thought-out concept of endowments made that book well worth while. But I also said that, to my mind, Farland struggles a bit with characterisation and that his sense of timing is sometimes awkward. It's a good debut, true to the current trend of (extremely violent) "militaristic" fantasies, but it's not top-notch.Well, I just finished reading the second volume, "The Brotherhood Of The Wolf". And though that doesn't happen often, I have to admit I'm impressed. Very. "Brotherhood" is far superior to "Sum". The central characters (like Gaborn, Borensen and Myrrima) are portrayed much more fully. The story flows in a manner which makes "Sum" look positively stuttering, culminating in an ending which is nicely foreshadowed but still arresting and, even, grandiose. And perhaps best of all, Farland sticks to the endowment concept but wisely eschews flogging it to death: in this book it is simply a given, an important part of structure of the world he creates but not something the reader is requested to marvel at every turn.In short, "Brotherhood" isn't just good. It's top-notch. Farland hasn't reached the level of George R.R. Martin or, indeed, Steve Erickson (and, to be frank, he may never do so). But this second instalment seems to make clear that he can write much better that, say, John Marco. Now, I wonder what that third book ("Wizardborn") is like. A lot of people obviously thought that one a bit disappointing... Hmm, I'll be back.

The series leaves the well-trod path, and begins to delight!

Published by Thriftbooks.com User , 21 years ago
I admit that reading the first Runelords book, I felt like I was heading through well-explored territory. It was like my hometown had been painted up and the streets were repaved, but I still felt like I knew where I was, and where I was going. It was fun to look around, but once you got a feel for it, it was your hometown again--nice, comfortable, but maybe a little normal. In this second book, I really felt like the series started becoming a real, viable world of it's own--by which I mean this: I started caring. It wasn't just Thehero and Theprincess and Thebadguy any more. It was really Gaborn, and Raj Ahten. I'm honestly perplexed by the negative reviews that tear down the characters--I really felt like the characters drew me in, particularly here, in the second book. The only explanation I can find for it is this: The characters aren't flashy, or hilarious, or super-heros (even the ones with super-human powers), but rather are human, with human motives and desires. Ask yourself the question--what if you had the strength of 20 men? And what if those 20 men were men who you knew, and getting that strength meant that THEY WOULDN'T have it any more. Sound intriguing? Yeah, it is. But it's not an action-packed question. Sure, because you've got the strength, you end up seeing plenty of action, but the real questions in Runelords aren't about how the power is used, but about how it's obtained. And whether the ends justify the means. There's plenty of action. Armies of reavers, men with near-infinite power, all the fun stuff. But the depth is in the questions, not in the fine points of battle.

I really loved this book.

Published by Thriftbooks.com User , 21 years ago
First off, I absolutely loved this book. It has all the basic necessary elements of fantasy: magic, heroes, evil wizards, and terrible monsters, and each one of these elements is presented in a new and unique way. The magic is limited in an ingenious way, the heroes are faced with horrible and blatantly unfair obstacles, the evil is practically unbeatable, and never does the story truly lose its believability. Secondly, the plot is very good, and many times is completely unpredictable, and even the least unique aspects of the plot, the environment, and the characters are presented in a method which makes them not only enjoyable, but thought provoking. Finally, despite the incredibly entertaining storyline and great writing style, the novel communicates a commentary on basic human emotion, life, and death. In the novel there is many degrees of good and evil, there are characters of greatly varying degrees of morality, from characters who believe they are moral but are evil, to characters who are neither good nor evil, to characters who are morally neutral but also definitely evil. So, whether you read books for enjoyment and entertainment, or to discover new ways of looking at life, or a little of both, like me, Brotherhood of the Wolf is an excellent choice. I bought this book, started reading it, and didn't stop until I finished it at 2:00 in the mourning on Sunday night.

I loved it... it built to a great ending!

Published by Thriftbooks.com User , 22 years ago
When I picked up this second book in Farland's Runelord's series, I wasn't sure what to expect--would it be as good as his last book in the series? Well, as I quickly discovered, it was... and it perhaps even surpassed the first book. The action is heartpounding and unpredictable; I found myself holding my breath in the battle with the Darkling Glory, and unable to put the book down during the reaver attack at Carris and the battle for the Seal. However, Farland also manages to focus on interesting character development, such as Gaborn's attempts at understanding what he must do with his power and Myrrima's much greater role in this book than the last. Raj Ahten continues to develop in interesting ways as well... I am curious as to what Farland will do with him in the future. And I must say I especially like the idea of reavers--they are certainly some of the most interesting creatures I have encountered in fantasy in a long time. The ending was fantastic--the last 150 pages were incredible. I find that I enjoy the Runelords books more now than I enjoy much of Robert Jordan's work... it remains to be seen if Farland can continue this level of fantasy. An excellent read.
Copyright © 2020 Thriftbooks.com Terms of Use | Privacy Policy | Do Not Sell My Personal Information | Accessibility Statement
ThriftBooks® and the ThriftBooks® logo are registered trademarks of Thrift Books Global, LLC