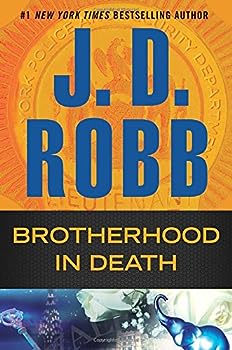 In this thrilling novel in the #1 New York Times bestselling In Death series, Lieutenant Eve Dallas finds herself in the middle of a conspiracy when she investigates the disappearance of a former U.S. Senator. Just as Dennis Mira is about to confront his cousin Edward about selling the West Village brownstone that belonged to their grandfather, he gets a shock: Edward is in front of him, bruised and bloody...and then everything goes black. When Dennis...

One of the Best "In Death" series books by Nora Roberts.

Published by Thriftbooks.com User , 5 years ago
I will say I got this from the Public Library as I didn't have the cash at the time. This book # 42 of JD Robb's In Death series is MARVELOUS!! JD Robb and Nora Roberts have has some poor and some really awful books in th epast but this one is tight and right. Eve investigates the death of a former Senator in his own house. The Senator happens to be the brother of Eve's great friend Charlotte Mira who is aslo a shrink with he police Department. Her Husband Professor Mira is a slightly forgetful but a really sweet man whom everyone adores. Mr Mira went to confront the Senator to tell him he could NOT sell the family home that was left to them equally in their grandfather's will. He hears voices and noises and looking into the library finds his cousin tied in a chair and beaten. As he enters the room he is struck over the head. Awakening, Mr Mira finds his cousin gone. The police are called after Mr Mira leaves the house and when Eve Dallas the protagonist and the lieutenant of NYPSD Murder division shows up, she finds the Senator hanging from the family house's front hall chandelier! Of course he is dead... This is book 42 in the series. If you are fan you have read it. If not I advise you to give the series a second chance. I read this book front to back and never put it down until the very end. I give it a 5+ stars and a REALLY HIGH recommendation.
Copyright © 2020 Thriftbooks.com Terms of Use | Privacy Policy | Do Not Sell My Personal Information | Accessibility Statement
ThriftBooks® and the ThriftBooks® logo are registered trademarks of Thrift Books Global, LLC