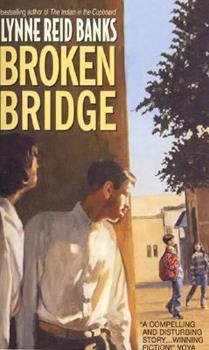 (Book #2 in the One More River Series)

The attack came suddenly and without warning, as twoyoung teenagers walked casually through the streets of Jerusalem,When it was over, one lay dead, the other mysteriously spared,yet left to face the... This description may be from another edition of this product.

Published by Thriftbooks.com User , 15 years ago
This book is a sequel to "One More River" by the same author. It is much darker and less hopeful than the first book, of course accurately reflecting the change from the optimism of the 1960's to the 1990's, when "Broken Bridge" was written. Also a more adult level book, dealing with some sad stuff. And although written in the 1990's, the portrayals of dealing with violence should hit home for people after 911. I don't want to give away the ending to those who haven't read it yet: but I will say that, I don't know if the author intended this, but the ending seemed to me at least, to symbolize that things (at the time she wrote) were dark but not yet totally hopeless, and could be salvaged if the two sides could reach out. (I wonder if she still feels that way?) A few comments: it was disappointing to be introduced to Glen, who was a strong interesting character, and then have him killed off right away. I didn't feel that Dale was a very interesting character and found myself being bored with the parts that were from Dale's point of view: it would have been more interesting if the author had instead done more with Lev and the budding romance between him and Nili, which was powerful and could have been more so. I will end by saying that I have enjoyed reading the story of Lesley and her family in "One More River" and "Broken Bridge", and I really hope that Ms. Banks writes two more books in this series: a prequel to "Broken Bridge" that is set in Lesley's youth that tells of her marriage to Ofer and also Lesley's civil rights work: as there was little in "Broken Bridge" about Ofer, and it would be interesting to read about that relationship, as he is an interesting character. And the second book, bringing it up to date to cover the period of the current decade: how did Nili, Lev, Nimrod and the rest of the family cope with the challenges facing Israel between 1996 and 2006, including increased terrorism, etc.? What would be especially interesting would be a book that wrote about that generation and their army service and how it changed them.

Published by Thriftbooks.com User , 18 years ago
This book is a really wonderful book. It is the sequal to another great book called One More River. The story is really good and also it teaches you a lot about the Jewish Culture and Isreal. I have read both of them twice. I love them! I would definately reccomend them to anyone who is just looking for a great story or trying to learn!

Published by Thriftbooks.com User , 19 years ago
This book is a ver depressing story. I still loved it. The characters were in depth and believable. Contrary to some other reviews advice, I believe you don't have to read the prequel at all. I haven't read it, and Broken Bridge is still my favoritee book. It is a great educational story, as well, with lots of information from both sides of the Arab Israeli conflict. Some parts make me cry, yet some are funny too. The book is on the whole the best one I have ever read.

Published by Thriftbooks.com User , 23 years ago
I love Broken Bridge. It was painful and sad, but I still love it. It was very original in the story line and also it's characters. There is no one main character, and you'll be folowing the trail of thoughts of someone, and then all of a sudden you'll be following the trail of some one else in the room. It was hard, sometimes, to be left hanging on the edge when a chapter ended, only to find out what happens many chapters later. I think this is a very good writing style; it keeps you interested. Broken Bridge also had a good ending, with controversy between two cultures and, at the end, salaam. Peace.

Published by Thriftbooks.com User , 24 years ago
I thought that this was a great book. If you want to read this book you need to read the prequel, One More River. It is all about an Israeli family that emigrated from Canada in the 1960's and their lives in Israel in 1992. They live in a kibbutz which is a communal farm in Israel. I think that it is a good book because it tells you all about how the Arabs were and are treated in Israel after the Six Day War. You should really read this book if you have been to Israel or any of it's surrounding Arab countries. I think that the title sort of describes the book. You must read this book no matter what!! -Thanos Matthai
Copyright © 2022 Thriftbooks.com Terms of Use | Privacy Policy | Do Not Sell My Personal Information | Accessibility Statement
ThriftBooks® and the ThriftBooks® logo are registered trademarks of Thrift Books Global, LLC