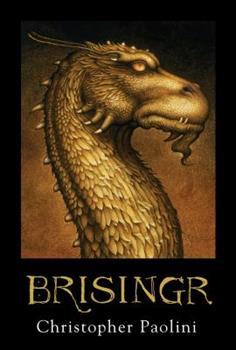 Brisingr, Or, the Seven Promises of Eragon Shadeslayer and Saphira Bjartskular. Christopher Paolini

(Book #3 in the The Inheritance Cycle Series)

Don't miss the latest book from the author of Eragon , The Fork, the Witch, and the Worm: Tales from Alaga sia , coming December 31, 2018 Perfect for fans of Lord of the Rings, the New York Times... This description may be from another edition of this product.

Published by BookDragon , 1 year ago
I don't understand why so many people say this is such an awesome series and book. I got invested enough to finish them, but honestly, I was skimming a lot because it was boring for most of the book. WAY too much detail, and felt there were a lot of unnecessary parts and whole chapters. I could probably go through the book and get rid of all that unnecessary detail, but book would be a maybe a third of its size.

Excellent book- condition of the book was ok

Published by Brittany , 1 year ago
These books get better as you go. Recommend ypu purchase "new" or "like new"

The weakest book in the series

Published by LewisRGeorge , 2 years ago
Brisingr is the weakest of the 4 books in this series. Nothing of note happens, except maybe the death of one character. Apparently, this series was only meant to have three books, until the final book became too large and had to be split into two. Everything that should have just been cut from the final book instead ended up here. Very little actually ever happens. I think Paolini was too excited to just follow Eragon's journey across his fictional world to spend time with the elves and dwarves and other Tolkien knock-off's. The Ra'zac were unceremoniously killed off in the opening chapter like they were loose ends and not the driving force of the story. Roran becomes almost as overpowered as Eragon without any logical reason. The magic system becomes so convoluted it can't be followed. A 'shade' shows up as the climactic villain of the book and is killed on the same page. Several pages are devoted to forging a sword, like it was copied from a wikihow article. I felt nothing but disappointment for this book I waited so long to read.

Published by chad strickler , 3 years ago
Love the first two books. I'm sure I'll love this one

I can't wait for the last book!

Published by Thriftbooks.com User , 12 years ago
This book really does continue the saga. The characters remain consistent from the earlier story. Adventures, from significant battles to subtle discoveries, hold the interest of the reader throughout. As in the earlier books, seemingly minor events become major revelations or factors in moving the plot forward. Don't forget anything that occurs - no matter how trivial it may seem! The book is easy reading and difficult to put down. Be sure to reserve plenty of time for it.

Brisingr, the last and the best.

Published by Thriftbooks.com User , 13 years ago
It is an excelent boock. If you want to reed a soft and ligth boock, this is the best. The price and the cuality is good. Paolini write this kind of teme like a teacher. It`s the best.

Published by Thriftbooks.com User , 13 years ago
This was a great book and i can not wait for book 4 to come out.

Brisingr Mentions in Our Blog