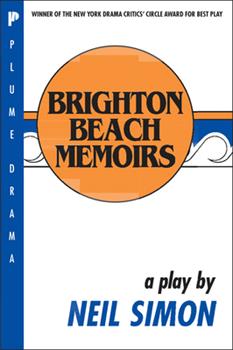 (Book #1 in the Eugene Series)

A young boy from Brooklyn comes of age in the first play in Neil Simon's semi-autobiographical "Eugene Trilogy"--followed by Biloxi Blues and Broadway Bound . Meet Eugene Jerome and his family, fighting the hard times and sometimes each other--with laughter, tears, and love. It is 1937 in Brooklyn during the heart of the Depression. Fifteen-year-old Eugene Jerome lives in Brighton Beach with his family. He is witty, perceptive, obsessed with sex,...

Published by Thriftbooks.com User , 18 years ago
Brighton Beach Memoirs is a play about a fourteen-year-old boy growing up in 1937. The boy's name is Eugene Jerome. The play is divided into two acts. The first act is one night in Eugene's house. The second act is a week later in his house. Eugene is growing up in a hectic and eventful household of seven family members. He writes memoirs in his journal about his family and different events occurring in his life. During the play, Eugene share's his own personal thoughts with the audience. This really gives the audience an inside look on Eugene's life. I reall liked having this inside view. It really kept me into the book. Brighton Beach Memoirs was a real page turner. I highly recommend it!

A play that should be read by families.

Published by Thriftbooks.com User , 18 years ago
"Brighton Beach Memoirs" by Neil Simon is just superb! I saw the movie before reading this play, and I love it, so I knew I would at least like the play. I *love* the play; it's become one of my favorites. I fell in love with all of the characters and just adore the feeling of family that comes through while reading it. With witty dialogue (that can truly be appreciated my by people of the Jewish faith), I couldn't stop laughing, smiling, and just enjoying myself. I recommend.

It's In the Family.

Published by Thriftbooks.com User , 19 years ago
There is a reason that Neil Simon is revered by the public, yet basted by critics. His plays contain characters and situations that just about anyone can relate with. BRIGHTON BEACH MEMOIRS is based upon Simon's youth. It is a family play; not only is it about a family, it is a play that the whole family will enjoy. Lots of laughs and tons of fun.

one of the best plays i've ever read

Published by Thriftbooks.com User , 21 years ago
"Brighton Beach Memoirs" was recommended to me by a teacher who was well aware of my reputation as a theater geek. I wasn't familiar with the work of Neil Simon, but after reading this play I am anxious to get my hands on more of his stuff. This play is simply brilliant - I often found myself lost in 1930's Brooklyn. Simon has created easily relatable characters, and his greatest triumph in character development is with that of Eugene Jerome, the protagonist on the brink of manhood. The play does it all - make you laugh, cry, think. It's one that is not to be missed.

A play that has actual substance

Published by Thriftbooks.com User , 23 years ago
I am a lazy high school kid who reads as little as possible, and I read this play three times- taking away something new everytime. I must admit that I first saw it as the movie with Jonathon Silverman, but I had to read the script to get the full effect. I try to watch it with my friends, but none of them seem to have the attention span to watch something that didn't cost billions of dollars for a sinking ship (not to belittle "Titanic's" success, but it appeals to the people who are seeking easy entertainment that jumps up and bites you in the a$$). The way I started researching Neil Simon was through a school assignment- I won't lie. My research paper had to be on an American author that no one else was doing. I couldn't think of anyone to do after all my first choices were taken, so I started asking my teacher if I could do a songwriter. That would be too easy. I was planning on listening to John Mellencamp or Bruce Springsteen, who wrote my favorite song, "Blinded By the Light". Needless to say, my teacher vetoed these requests, so I asked her for some suggestions. She rattled off about a million names that I had never heard of. Then she said "Neil Simon" and it sounded familiar. I inquired more about him and she told me he was a playwrite. Later that night, I asked my dad if he had heard of this guy. He told me that he had, and that I had, too. He reminded me that we had "Brighton Beach Memoirs" on tape, and I immediately decided that I would do my paper on him. Many peoplewonder why a "gentile, athletic, boy from the midwest" would want to research him. Some of these same people dismiss the scene in which Eugene and Stanley discuss masturbation as a cheap laugh gauranteed by uncomfortability. Like the average kid I reply with a shrug of my shoulders, but it's obvious to me that Simon appeals to everyone who appreciates real life and the humor in it. As a teenage boy, I can identify with Eugene Morris Jerome who if he "were given the choice between a tryout with the New York Yankees, and actually seeing Nora's bare breasts for two and a half seconds would have some serious thinking to do." The play is a sharp realization by Eugene that the world doesn't rotate around puberty as he records how his family deals with not only "Stanley's principles, Nora's career, the loss of . . . (a) business, how to get Aunt Blanche married off and Laurie's fluttering heart, but at any minute there could be a knock on the door with thirty-seven relatives from Poland showing up looking for a place to live."
Copyright © 2020 Thriftbooks.com Terms of Use | Privacy Policy | Do Not Sell My Personal Information | Accessibility Statement
ThriftBooks® and the ThriftBooks® logo are registered trademarks of Thrift Books Global, LLC