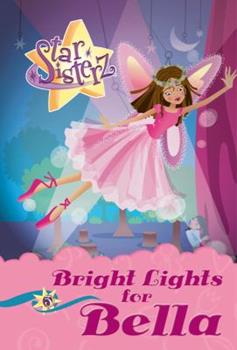 (Book #3 in the Star Sisterz Series)

When Bella DeLuca gets a starring role in the school production of A Midsummer Night's Dream, it's truly a dream come true--yet Bella's dream soon turns into a nightmare. Playing a fairy, Bella must fly above the audience attached to a cable. But she's afraid of heights. Original.

Three dimensional and realistic story about facing and conquering fears

Published by Thriftbooks.com User , 16 years ago
BRIGHT LIGHTS FOR BELLA, the third volume in the Star Sisterz series, features Bella DeLuca, a 14-year-old high school freshman trying to figure out who she is. Not a brain like her younger sister and not an athlete like her older brother, Bella hates feeling in the middle and uninteresting. When a poster announces auditions for the upcoming production of "A Midsummer Night's Dream," Bella decides to take a chance and try out. Best case scenario: she'll get to act with her older brother's friend Seth and convince him that she's not a little girl anymore. But Bella is not prepared for all the things that could go wrong, such as her best friend Rani getting mad at her because trying out for the play means she can't do brain bowl like they planned, or the fact that her role of Titania includes flying across the stage in a harness. Bella is so afraid of heights that she hasn't done her laundry for a week because she doesn't want to climb a step-ladder and get the detergent down from the top shelf. How is she ever going to get into a harness and fly high above the audience in the play? When Bella receives a mysterious message advising her to tell a friend her secret fear, it takes her a while but she finally figures it out. But can she reach out to Rani, who's still mad at her, and ask for help conquering her fear of heights? Or is Bella doomed to be a friendless member of the audience? Once again, the Star Sisterz sets just the right tone for a series book. The characters, particularly Bella and Rani, are believable and the conflicts are difficulties that every young teen faces. Bella takes realistic steps to solve her problem, and it's likely that the decisions she makes could inspire readers to face and conquer their own fears. Bella lives in a three-dimensional world that includes siblings, parents, teachers and friends. Her father in particular is a vivid and intriguing character, and Bella's relationship with him is heartwarming. One of the things I like best about the Star Sisterz series is its recognition that everyone has problems, and that even minor problems can loom large and insurmountable if you don't know how to solve them. In BRIGHT LIGHTS FOR BELLA, author Lana Perez takes care to show that problems can be broken down into smaller pieces and solved one step at a time. This is an important lesson for preteens and teens to learn --- and something many adults could use a refresher course on. --- Reviewed by Paula Jolin
Copyright © 2022 Thriftbooks.com Terms of Use | Privacy Policy | Do Not Sell My Personal Information | Accessibility Statement
ThriftBooks® and the ThriftBooks® logo are registered trademarks of Thrift Books Global, LLC