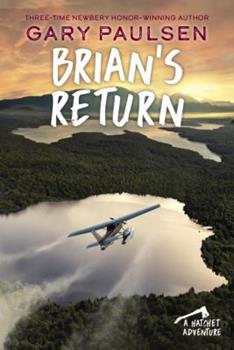 Brian returns to the wilderness to discover where he truly belongs in this follow-up to the award-winning classic Hatchet from three-time Newbery Honor-winning author Gary Paulsen As millions of readers of Hatchet , The River , and Brian's Winter know, Brian Robeson survived alone in the wilderness by finding solutions to extraordinary challenges. But now that's he's back to ordinary life, he can't make sense of high school life. He feels disconnected,...

Returning is never the same

Published by Notacluegal , 7 months ago
Brian learns more about himself and his limits as he return's to the wilds. He has longed to be where he can clear his mind and finds a new, welcomed adventure. I have enjoyed each of the Hatchet Adventures

Condition of book when received

Published by Kelly , 3 years ago
This book is a gift for my Granddaughter for Christmas 2019 and I ordered it to be in good condition and it arrived to me with the back all roughly scratched up.

This book was receive in damaged condition cover was torn. Book pages had water damage. Not happy

Published by Jeanne crockett , 3 years ago
Book in bad condition should not have been sold in the condition it was in. Not happy

Published by Thriftbooks.com User , 19 years ago
This book written by Gary Paulson is outstanding. This book is very fun and easy to read. If you are a reader that loves the outdoors this book is for you. This book is about brian, a fourteen year old boy is alone in the woods. He is lost. He only has a few things that can help him stay alive, and he has to face the hardest challenge of all WINTER. Can he stay alive?

Published by Thriftbooks.com User , 21 years ago
The book Brian's Return is a very good book. It's interesting and no matter where you stop reading you can tell something good is coming up next. It's not a high reading level so it's easier to understand. The author explains every thing throw and it's not really at a high reading level. Brian's Return is the last book in a series. The first book was called Hatchet, second was The River, third was Brian's Winter, and then Brian's Return. Hatchet was about when it all started. Brian was flying on a single engine plane to see his dad up North. The pilot had a heart attack and the plane went down in a lake in the middle of the wilderness. He had to learn how to survive alone in the wilderness with only a hatchet for fifty-four days. In The River, the government asked Brian to go back to the wilderness and show astronauts and the military his survival techniques that kept him alive. Derek Holtzer went with him to observe him and take notes. But during a storm, Derek was hit by lightning and falls into a coma. Brian builds a raft a tries to transport Derek to the nearest town down the river for medical help. Brian's Winter is a little different, it takes after Hatchet. The author made it that what if Brian didn't get rescued and had to make it through the winter. The stakes were raised for survival. Brian had the longest winter ever. Finally, Brian's Return. Brian was rescued every time before and brought back to his mom in the city. After everything Brian has gone through he has to try to fit back in with the city life. He had to get used to the tv, stove, microwave, grocery store, noisy vehicles, and everything else that he had learned to live with out. He started school again and tried to make friends and hang out, but he doesn't feel that he fits in. The whole time he is in the city he can't quite thinking of the wilderness and how much he wanted to go back. Nobody was really interested in what he felt and his stories. He felt alone until he meet a blind guy named Caleb. Caleb was very interested in what Brian had to say and always asked him to describe the scenes that he has seen. Caleb understands that Brian needed to go back to the wilderness and helped him. His mom didn't want to go but let him considering he would only be gone for a month or two and he brought some supplies such as a canoe, tent, and some food. With both his parents gave him permission, Brian made arrangements and went back to the bush. Once he got there a thought came to him, "Should I go back home at the end of fall or stay here were I belong?" In conclusion, I recommend this book to anyone who likes to read about wilderness and survival. If you read the first three books, then this book would be better and easier to understand. I enjoyed this book very much and I think you would too. I definitely give it 5 stars.

The third and best sequel to Hatchet

Published by Thriftbooks.com User , 21 years ago
Brian's Return, by Gary Paulsen, is an adventure/survival book about Brian's long-awaited return to the Canadian woods written by Paulsen, a three time Newberry Honor award winner. The story begins with Brian, a 16 year old boy trying to live a normal life. The hard part for him is, he spent 48 days in the Canadian woods after his pilot had a heart attack and it changed his perspective on life. He can't find joy in having his food put right in front of him, or talking about who was going out with whom. After beating up a football player, he sees a counselor named Caleb. Caleb listens to his beautiful descriptions, and tells Brian that the answer was to go back up into the wilderness. He creates a list and a plan for a hundred mile kayak trip to eventually visit the Smallhorns, who rescued him in Brian's Winter. Brian goes through yet another action packed wilderness experience in Brian's Return. This book would be a little hard for young kids to find the true meaning of, so ages 11 and up would be a good reccomended age. Anyone who enjoyed Hatchet and its other sequels will enjoy this book.

Published by Thriftbooks.com User , 21 years ago
This book was about a boy named Brian who stayed in the wilderness for awhile and went to the city with his mother. He didn't like it in the city. One of the days he was in the city he got into a fight and got put with a counselor to fix his problem. After awhile he went back to the woods because he didn't like it in the city and because he wanted to go back. He thought that he would behave better in the wilderness rather then the city. He took a cab to a cabin of a pilot and then took a plane to a river. From there he took a canoe to find a campsite. Along the way he got into many more adventures. I really liked this book and would recommend this book to anyone who likes adventures. Also to someone who has already read the other books by Gary Paulsen.

Published by Thriftbooks.com User , 23 years ago
I think Brian's Return is a great book. If you have read Hatchet, The River, and Brian's Winter (like I have) then you will understand the story better 'cause you probably wouldn't really understand it if you haven't read at least one of those three books that came before this one. This time, Brian is back at home and he can't seem to adjust to his formal life at home. After he gets into a huge fight with this kid who is jelous of him and gets arrested for it, he decides that the best place for him is back in the woods and so he goes back there. This time, Brian is prepared and he is used to the way the woods is so he can survive. I think this book is awesome and if you have read Hatchet, The River, and Brian's Winter and liked those books, then I can gaurentee that you will like Brian's Return! Even if you haven't read those books but have read other books by Gary Paulsen then you should get this book!
Trustpilot
Copyright © 2022 Thriftbooks.com Terms of Use | Privacy Policy | Do Not Sell or Share My Personal Information | Accessibility Statement
ThriftBooks® and the ThriftBooks® logo are registered trademarks of Thrift Books Global, LLC