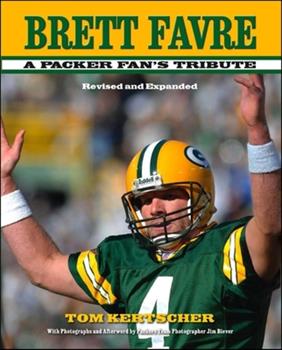 Brett Favre is one of the most popular athletes in America, in all sports and his jersey is the sixth all-time bestseller in league history, according to NFL.com. This revised and expanded edition of Brett Favre: A Packer Fan's Tribute is a fitting salute to an American hero. This revised and expanded edition of the book contains everything from the first edition and more. Its chapters are devoted to the distinctive aspects of his play that returned...

Published by Thriftbooks.com User , 14 years ago
Many fans revere Brett Favre, and they have lots of reasons to do so: --contributions to Packers' history --record streak of playing in consecutive games --toughness under adversity --come-from-behind wins --aw-shucks manner --longevity as the Packers' starting quarterback If you feel that way, you'll love this book. It shares those perspectives well and in detail, beautifully illustrated by momentous and iconic photographs of Brett at his best. If you don't like the way that Brett unretired a few months after retiring to join the green and white in the New Jersey swampland, then this book might feel a little like a twist to the gut. I'm not from Wisconsin and have never been a Packers' fan. But I have always admired the Packers. I think that the franchise and fans stand for very special qualities in professional football, ones exemplified by Vince Lombardi. Why does a player decide to stop being a legend in his own town and head off in the twilight of his career for a so-so year somewhere else? I guess they are still able to get the job done (at least in their own minds). Brett at his best for the Jets looked pretty good. Yes, he still threw lots of crazy interceptions . . . but that's part of his gunslinger persona. He looked bad at the end of the season, and you have to think he was hurt. A lot of blood will hit the floor in New Jersey as a result, with coach Eric "Mangenius" Mangini already gone. The quarterback the Jets dumped, Chad Pennington, had a much better season in Miami with the former 1-15 Dolphins than Brett did for the former wild card Jets. How the mighty can fall in one year. It's worth thinking about. Where will Brett be next season? Who knows? I do hope he will think about his legacy in Green Bay before deciding.

Published by Thriftbooks.com User , 14 years ago
As Brett Favre's era comes to an end at Green Bay this third edition, THE FINAL SEASON, concludes a tribute to his many accomplishments. Favre fans will appreciate nearly a hundred photos from the Packers Team photographer Jim Biever to accompany era-by-era reviews of Favre's achievements and winning ways. Any collection front in Packers history or sports biographies in general will find this a popular lend.

A must have for any Packer's fan!

Published by Thriftbooks.com User , 14 years ago
Reviewed by Kam Aures for RebeccasReads (10/08) Let me preface this review by letting everyone know that I am from Wisconsin. I attended college at the University of Wisconsin - Green Bay, so I lived in Green Bay for four years. Green Bay is a city that lives and breathes for their football team. Drive around on game day and it is like a ghost town, as everyone is inside somewhere watching the game. Throughout college I was employed at the airport and witnessed the Packers returning from away games to gigantic groups of cheering fans. Many Packer heroes and role models came and went throughout the years, but the one constant for the Packers was quarterback Brett Favre. Brett came to Green Bay in 1992 and played for sixteen seasons up until his retirement. Unfortunately he "un-retired" and is now on a different team, but "Brett Favre: A Packer Fan's Tribute" covers Favre's years on the field up until 2007 as a Green Bay Packer. The book covers how Brett Favre came to be a Green Bay Packer and then focuses on standout games. Some of the types of games detailed are comebacks, cold weather, the Super Bowl (of course!), the streak, and the final season. It was interesting reading through the descriptions of the games and remembering watching them on TV, or in the case of one extremely cold day, actually being there. One of the most interesting facts presented in the book to me was that throughout "the Brett Favre era, two-hundred and twelve other quarterbacks started games in the NFL, according to Elias Sports Bureau." During the time Brett Favre was quarterback for the Packers, the team's main rival, the Chicago Bears, had twenty-one starting quarterbacks, the Lions had fifteen, and the Vikings had fourteen. Kertsher's book contains many great photographs, which definitely add to the appeal of the book. There is also a "Fan Tribute" section in the back containing words from some of Brett's many fans. One of my favorite fan quotes refers to the game that Brett played immediately after his father passed away. It reads as follows: "For my birthday, my partner got us tickets to see the Packers come to Oakland to play the Raiders on Monday Night Football on December 22, 2003. The game started, and Brett lit it up! I looked around and saw the stunned and silent Raiders fans. Every time Brett threw the ball, his receivers went above and beyond themselves to make sure they caught it- it was like they were paying tribute to Brett and helping him say goodbye to his dad. Gradually, the Raiders fans began to realize that what they were seeing was something special, and pretty soon they were all jumping out of their seats and cheering with me as Favre completed one pass after another. The guy next to me high-fived me after a Packers touchdown pass and said, `We're seeing history tonight.' What a way to pay tribute to your father." (Tom D'Acquisto, Hayward, CA, p. 162) This quote to me sums up the effect that Brett Favre has on people. K

Published by Thriftbooks.com User , 14 years ago
Reviewed by Lori Plach for Reader Views (10/08) March 6, 2008 is a day Packers fans dreaded. It would be so hard to say goodbye to a man who led their team to the Super Bowl and will never be forgotten. He is so beloved by Packer fans and the city of Green Bay; why he even had a street named after him. It wasn't without tears by the man himself that he said goodbye to playing the game and the fans who embraced him. Brett Favre made everyone feel that he was leaving the game that he loved and entering a new chapter of his life. Little did he know at the time, or did the Packers organization know, that this was not to be the final goodbye. Anyone who watches National Football League games on Sundays knows that he is now the starting quarterback for the New York Jets. "Brett Favre: A Packer Fan's Tribute" is a game-by-game report of each of the games which Brett started while wearing the Green and Gold. With the most consecutive starts in NFL games, this book is packed with recaps of the most memorable games in his illustrious career. What packer fan could ever forget the gutsy Monday night performance the night after his father Irvin's sudden death? The snow globe game in Green Bay in 2007 won't soon be forgotten either, where he jokingly threw a snowball at his teammate and high-fived a referee. True Packers fans will want to keep this book in their collection. Being filled with many photographs, it would make a wonderful coffee table book. Brett is a legend and sure to be enshrined in the National Football League Hall of Fame in Canton, Ohio. Living in Wisconsin when Brett retired, you couldn't miss the news coverage of his "retirement." He joked that after seeing some of the television stations tributes, he now knew what it felt like to die. Brett will long be remembered as a legend. He now has a book which is devoted to his statistics and photo history of his time in Green Bay. "Brett Favre: A Packer Fan's Tribute" by Tom Kertscher would definitely bring a smile to all the Brett Favre fans out there all over the country!

This is a book that is a must read for all fans of the Packers, NFL football and nice guys who finis

Published by Thriftbooks.com User , 14 years ago
There will never be another like him is the most appropriate way to describe Brett Favre. His jest for the game of football was unmatched and his ability to turn bad plays into good ones and occasionally turn good plays into bad ones always kept you interested in the game. No one who watched the game between the Packers and the Raiders on Monday December 22, 2003 will ever forget it. Less than 24 hours before the game started, Favre was informed that his father had suffered a massive heart attack and died. Even though he was given the opportunity to sit the game out, Favre played and turned in an incredible performance. His play was so astounding that even the Raider fans in the stands began cheering him. Like some of the people who contributed to this book, I watched the game with tears in my eyes. While he did engage in occasional trash talk with his opponents, it was always clear that they had the highest respect for him. He would go jaw to jaw with an opponent and then they would slap each other on the helmet and go back to their respective huddles. All of this inspiration and his impact on the game are captured in this largely photo tribute to Brett Favre's years as a Packer. His uncanny ability to play and win is unmatched by nothing other than his base humility as a person. He never allowed himself to be floated above the others, always willing to meet with fans and treat them as an important asset rather than an unpleasant duty. In the elitist world of professional sports stars worth millions of dollars, he exuded the simple life of the Mississippi country boy that he remained, even while in the national limelight. This is a book that is a must read for all fans of the Packers, NFL football and nice guys who finish first.
Trustpilot
Copyright © 2022 Thriftbooks.com Terms of Use | Privacy Policy | Do Not Sell My Personal Information | Cookie Preferences | Accessibility Statement
ThriftBooks® and the ThriftBooks® logo are registered trademarks of Thrift Books Global, LLC