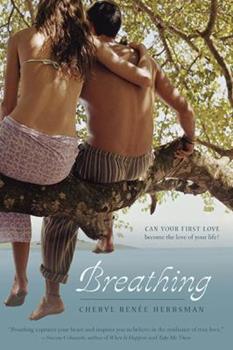 Savannah is convinced Jackson's the one. He stays by her side when she is hospitalized for severe asthma. But when Jackson is called away to help his family, Savannah must learn to breathe on her own.

Published by Thriftbooks.com User , 12 years ago
Savannah and Jackson's story is a new type of love story. Unlike most stories about long distance relationships, this one inspires hope. As soon as I started reading this book, I fell in love with Savannah's character. She embodies the typical teenage girl, full of insecurities and hopes. Unlike most girls, though, Savannah has severe asthma. Savannah was content to be by herself for the summer: working, reading romance novels, and watching out for her little brother. Then she met Jackson Channing. Jackson isn't like the other guys around town. He's 18-years-old and staying with his cousins, the Channings. His father died recently and his mom didn't want him around because he reminded her too much of his father. Jackson didn't mind, though, because it gave him time to work on his paintings, his hidden secret. Jackson couldn't be more perfect: respectful, kind, and caring. When Savannah collapses after an asthma attack, Jackson stays by her side the whole time she is in the hospital. And when her mom gives them a manifesto of rules they must follow, he doesn't even blink. He seems like the perfect boyfriend, and he is. That is, until he is called away to help out with his family back home. She knows that if he goes back he is going to be trapped in a life that he doesn't want, with a job all day and no more free time for his paintings. But it's not only that that has Savannah worried. Ever since Jackson arrived her breathing seems to be doing better. What happens if he leaves and she can't breathe without him? Will Jackson and Savannah's relationship be able to survive the long distance? Will Savannah help Jackson realize that he should go after his dream, no matter what it takes? Will Savannah finally learn to breathe on her own? Breathing is the perfect debut novel by Cheryl Renee Herbsman. Not only is it told in witty Southern dialect but it is full of lovable characters that embody the traits of the South.

Published by Thriftbooks.com User , 13 years ago
Breathing is a simple and sweet love story with a limited cast and a regionalized dialogue that is fun to read aloud; a great excuse to practice some southern twang!

Published by Thriftbooks.com User , 13 years ago
I have to admit I roll my eyes a little at the depictions in a lot of books and movies of two teens finding each other and acting as if they are soul-mates destined to be together forever. But there's another part of me that desperately wants to believe that it's possible. And BREATHING makes me believe. From the initial wild crush to the deepening connection, to the doubts and jealousies and abiding love, this book captured my heart and pulled me in to Savannah and Jackson's world. And then there's the voice: I loved reading this book just to hear Savannah's sweet, wry Southern voice telling me her story with honesty and good humor. Lastly, I loved the fact that the romance isn't all that's going on here. Savannah and Jackson both have dreams of their own, and the value and importance of those dreams is not ignored by the narrative. I would most definitely recommend this book to anyone who wants to believe that love can be true at any age, even if it is tested.

Published by Thriftbooks.com User , 13 years ago
What can I say about this book other than I loved it? Cheryl Renee Herbsman has made me a fan girl. It was an outstanding debut novel. Everything just clicked together in this book: the romance, the Southern charm, the writing, the characters. *sighs* I first received an ARC of this book back in July. Even though it's been months since I read it, it's still very clear in my head. The way that this book is written is that it's written in southern grammar. That means that the book is written in a southern dialect. It is a bit hard to get into it at first since your brain is mentally correcting the grammar, but then, you start loosening up and after a while, the southern dialect doesn't bother you anymore; it makes the story much more amazing. Cheryl's writing is just superb and it transports you to the South. I had a hard time believing that this was her debut novel. She just captured the character's emotions perfectly as their thoughts and actions. She's just a great writer and storyteller. Savannah's personality and charm just popped out of the book and made it seem as if she were in this very room. The things that she said sometimes made her seem wise and the other things she said made her seem authentic as a teen. Her southerness was refreshing and made her voice just pop out, made her more realistic. Her asthma, which she blames on her daddy leaving, seemed more like panic attacks but I did like how Savannah didn't let them control her. The secondary characters were realistic as well and just leapt off the page. The authenticity of this novel just made it feel like as if you were watching a movie or as if you were a character, witnessing what was happening. Each character was well-thought out, were distinguishable, and had their own thing that made them them. The love between Jackson and Savannah was really powerful and it was well-written. The obstacles they had to overcome just to be together just made their love much more powerful. I cried in some scenes where Jackson and Savannah couldn't be together anymore. Me! I hardly cry when reading books. Their love was strong and it grew with each day that they weren't together. Yes, it did happen a bit fast, but Savannah's description of their love makes it seem acceptable. It just made it right. Overall, this book wasn't just a romance. It was also a book about mother/daughter relationships, following your dreams, learning to take charge, and a wonderful coming-of-age novel. This book is highly recommended. I suggest, no order , that you buy a copy as soon as it's available. Or better yet, just pre-order it. I am definitely looking forward to Cheryl's next book. Sorry for my rambling review but I just can't seem to find the words to describe how much I loved this book. My review does this book no justice. -Carol http://bookluver-carol.blogspot.com

Published by Thriftbooks.com User , 13 years ago
Savannah was named after a tornado that was hitting Savannah, Georgia, when she was born. She lives with her mother and her brother, named Dog. Her father left when she was very young. Ever since the day her father left she has had severe asthma. She believes that she can't breathe without the support of her father. Her mother is a proud yet loving mother. She keeps losing jobs because she won't tell her employer why she misses work when Savannah is in the hospital. They live in a small two-bedroom house where Savannah has to share a bedroom with twelve-year-old Dog. It is the summer and Savannah has a feeling that life will soon be very good. Otherwise she is bored - her friends are out of town, and she spends her days working at the library and reading. Then she meets Jackson. All her breath leaves her. He is her soul mate. They become an item, and then suddenly Jackson is called back to his home to help his mother. We spend the rest of the book holding our breaths to see if Jackson and Savannah will be able to be together. I really enjoyed this story. It was written in a southern accent, which made it seem very authentic. Savannah is pushy but a very likable character. My favorite character was the mother, Porsha. She was a strong woman, who supported her children without any help from others, but at the end she had to let others help her out. I highly recommend BREATHING. Reviewed by: Marta Morrison
Trustpilot
Copyright © 2022 Thriftbooks.com Terms of Use | Privacy Policy | Do Not Sell My Personal Information | Accessibility Statement
ThriftBooks® and the ThriftBooks® logo are registered trademarks of Thrift Books Global, LLC