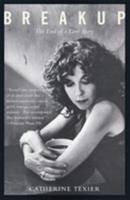 Breakup: The End of a Love Story

I will never forgive you. I will never make love with you again. I do not love you anymore. Breakup is the erotically charged chronicle of the tempestuous final months of an eighteen-year romantic and literary partnership, self-destructing in the aftermath of the ultimate betrayal. Fearlessly and courageously, Texier chronicles the end of that love as it is wrecked by infidelity and deceit in a literary tour de force reminiscent by turns of Marguerite...

Published by Thriftbooks.com User , 21 years ago
The author did an excellent job of making you feel every emotion that she went through during the breakup of her marriage. It was a haunting depiction of raw human emotion. She took you from the beginning of the breakup, through therapy and finally acceptance. Gut wrenching!

A MUST READ FOR DIVORCED WOMEN WITH A (?) 3RD PARTY INVOLVED

Published by Thriftbooks.com User , 22 years ago
I know it sounds cynical, but any abandoned woman with chidren, espcially, who feels there may have been a third party involved needs to read this book. it is so close to the bone that some may find it uncomfortable, but for me it was like finding out I am not the 0nly one who--despite better judgement but becasue of leftover passion and abiding love for one who is not worthy -- slept with my soon to be ex, tried to fight for my marriage/ and also, for anyone who has had a long term passionate relationship which hid the skids. I equate it with inexpensive (and comeplling, page-turning and entertaining) therapy for the (admittedly damaged) soul who blames themselves for trying to keep the family together despite insurmountable odds and for joel? a midlife crisis of a vain (aren't they all) creative man. do read it and cry when you emphasize with this valient woman's baring of her soul. brava to ms texier.....

Published by Thriftbooks.com User , 22 years ago
bravery in the face of tragedy epitomizes this woman's effort. i recommend it highly to anyone in the midst of a painful breakup -= it will provide a cathartic experience for the heart, all insults seem to miss the point -- she wrote her truth as she experienced it, leaving nothing out and thereby compiling a highly compelling and raw account of the oldest of scenerios: a woman scorned. i feel her husband was a fool to leave her - anyone with this much heart and talent should have been cherished as a natural beauty. i wish her well and KNOW she will find a man who is in full a man, able to handle a whole and real woman, a sensual and loving and loyal woman. my prayers are with you, ms. texier, for what it is worth. you deserve so much better.

Published by Thriftbooks.com User , 22 years ago
While this written in progress diary may be too raw for most readers to handle, I find so much in Texier's explicit account of her breakup - beyond the dynamics of the relationship she had with her ex-husband. I can't help but admire Texier for her wit, cockiness, viciousness, and vulernability in the face of adversity. Undoubtedly, this book is quite an emotional roller coaster as the author explores all of her mixed emotions, but the exploration is done effectively, without muddling her tone or intent. For once, I feel as if this is a novel where a woman's identity is fully represented, in as much as a novel can represent a person's identity. Although the novel greatly revolves around Texier's role as a mother and wife, she still is foremost an artist, thinker, and writer. While she may be overcoming the ultimate betrayal, Texier seems to be able to balance all facets of her life with great fluency, while still remaining true to herself in needs and desires. All people should strive to be so strong during life rocking changes!

Should be required reading for anyone who is married

Published by Thriftbooks.com User , 23 years ago
... or even considering it. I had read Texier's fiction years ago and found it only so-so. Whatever she was trying to get across about sex and human passion, major themes in her novels, never came across in a way to make me feel anything for the characters. But this memoir made me feel everything -- the passion, the pain, all that was at stake. I inhaled it, rather too quickly, perhaps, and it sank into my soul and left my nerves feeling bruised. Anyone who has been through a crisis (and not even particularly this kind of crisis) in a long term, deeply felt relationship, or even witnessed it in their parents' marriage or that of a close friend, will recognize the essential truths so well and precisely articulated here. Unlike other reviewers, I didn't mind the rawness, or the repetitiveness. It was necessary to see the wearing away of her dignity. It takes a while to say good-bye to twenty years of your life, and there is always that suspense of, will the situation reverse itself? I've known married couple who weathered multiple infidelities and a three year seperation and wind up happy grandparents together in the end. Americans are often in denial about matters of the heart, still clinging to absolutes -- total fidelity, happily-ever-after stories, despite that pesky one in two divorce statistic and the 70% infidelity rate. Texier's baring of her soul has been succor to several divorced women I know, and should be an antidote for all young women subject to the Cinderella propaganda still being broadcast through Julia Roberts movies and limp women's fiction. What intrigued me were the updated dynamics which I've also noticed everywhere in real life -- in the end, a man leaves not for a better blow job, but for money, or the illusion that success is obtainable through a relationship with a more influential woman. No longer do men want the little woman at home, taking care of the domestic front. Any emotional dependency is likewise anathema. As Texier reported, when she "cocooned" at home with her children, her husband rejected her. When he felt she was a has-been as a writer, he went on to someone he perceived to be a success. Well, it's rather ironic that this memoir has become Texier's pot of gold, professionally, and that Rose's "big" novel launched by his new editor/lover sank without a whisper of either sales or critical praise. Bravo Catherine! Perhaps it was she who needed to dump Joel Rose in order to get her literary star back on the rise. This breakup clearly invigorated her writing. It think memoir is her true metier, and that she has much more to tell about her unconventional upbringing and life. I look forward to her next work.
Trustpilot
Copyright © 2022 Thriftbooks.com Terms of Use | Privacy Policy | Do Not Sell or Share My Personal Information | Accessibility Statement
ThriftBooks® and the ThriftBooks® logo are registered trademarks of Thrift Books Global, LLC