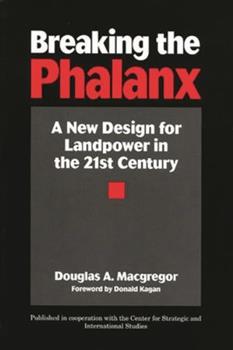 Breaking the Phalanx: A New Design for Landpower in the 21st Century

by Douglas A. Macgregor

This work proposes the reorganization of America's ground forces on the strategic, operational and tactical levels. Central to the proposal is the simple thesis that the U.S. Army must take control of its future by exploiting the emerging revolution in military affairs. The analysis argues that a new Army warfighting organization will not only be more deployable and effective in Joint operations; reorganized information age ground forces will be significantly...

Thoughts have stood test of time

Published by Thriftbooks.com User , 19 years ago
Interesting to note that COL MacGregor's book has been retrieved from the basement of the Pentagon and is being reread in light of our recent operations in Afghanistan and Iraq. It took a lot of courage to write this book since thinking outside the box is talked about, but acting outside the box is rarely done in the Army. In Iraq we still wanted to employ WWII force structures on the modern battlefield. However, we've also learned (maybe) that the much celebrated deep attack by Army Aviation was a failure.

Published by Thriftbooks.com User , 21 years ago
This is an excellent work and ranks among the best military theory I have read. Macgregor systematically presents the history of American combineds arms, tears apart the current structure, and rebuilds it into lethal, 21st century fighting force.Unlike many professional military men who take up the pen, Macgregor is an excellent writer, who justifies ever proposal he makes, but avoids bogging down the work in mountains of detail.I do not agree wholesale with all of Macgregor's points, particularly in regards to naval expeditionary forces, but the overall rigor of the book more than compensates for that fact. Macgregor has clearly grasped the premise that elite institutions (such as the American military) can only improve through the most rigorous process of self criticism and innovation."Breaking the Phalanx" is an innovative, outstanding work, and if there is any justice the Army will give him a medal for his brilliant contribution to American arms.

Published by Thriftbooks.com User , 22 years ago
Col MacGregor was first seen as the S-3 along with (both were then Majors) LTC H.R. McMaster fighting the Battle of 73 Easting described in Tom Clancy's Armored Cav. After battling the Iraqis, both of these brilliant tacticians went to work to better America's Army taking their experiences of combining arms in the Cav to heart. LTC McMaster focused in his book on the geo/domestic politics that led our nation into war in Vietnam and Col MacGregor looks into U.S. Army force structure/design. MacGregor begins by showing that in WWII, the U.S. Army created Regimental Combat Teams combining-arms to defeat the German mechanized armies long before the marines (who never had to fight a mechanized 1st world enemy in WWII or ever for that matter) created their smaller battalion-sized imitation brand. MacGregor shows that the Regiment/Brigade size is just the right size to combine arms (armor, infantry, artillery, engineers, aviation) as the Division is larger and harder to fight as an entity. My only regret is that he then proposes we get "break" the Divisional phalanxes to create Brigade Combat Teams where young one-star generals can command units fully equipped for modern warfare at all times and not assembled ad hoc. This is not necessary since you can create BCTs within existing Divisions, maintaining the honor/fighting traditions/identity of these legendary formations. The idea that by making the Army smaller we will be rewarded by the same amount of money that was for the larger force then being transferred to new equipment---is doubtful with America's anti-military spending mindset. Less is rewarded with less. These two assumptions have black-listed this otherwise fine book---just read the book and keep in mind that what he proposes can be done with existing Divisions and all will be well. 30 BCTs are better than 26.Col MacGregor then shows how we can mix/match what the U.S. Army already has to achieve some amazing capabilities---to show us the need he writes a Clancy-esque scenario in the Middle east to illustrate why reorganization is needed. His Airborne/Air Assault force structures create possibilities of Air-Mech 3-D maneuvers that could unhinge enemies by dislocation and support 2-D heavy force combinations by positional advantage. His recomendations throughout the book to move to an Army that is able to strategically deploy and be dominant in maneuver using digital means and PGMs is the proper combination of America's military power that stands in stark contrast to those that just want to posture from the sea/air or even space and never take control of the ground. He states: "precision strike is a capability not a stragey", and he is (pardon the pun) on target! Its almost prophetic that he stated that we must be able to deploy before a foe attacks his neighbor---just two years later we had the Serbs brutalize Kosovo and America could not rapidly deploy combined-arms units in relevant Brigade sizes by A

Published by Thriftbooks.com User , 22 years ago
This book received a lot of attention in the Army when it was published, and for good reason; it attacked the Army's organization that had existed since the second world war. Interestingly, the Army's new chief of staff, General Eric Shinseki, has begun changing the Army in ways first outlined in this book over two years ago. Among the changes: the adoption of more rapidly-deployable forces, "medium weight" forces, Light Armored Vehicles, such as those used by the USMC, and a squadron/battalion sized reconaissance element for greater intelligence. The Army has also modified the Officer Personal Management System, a move MacGregor advocated. Sadly, MacGregor himself is a full-bird colonel right now assigned to the National Defense University. Essentially, Macgragor has been put out to academic pasture. He will not get to command a brigade, and consequently will probably not be promoted again.

Published by Thriftbooks.com User , 22 years ago
A very intriguing and thought provoking book. It should be required reading for anyone interested in Military Affairs. This is precisely the type of thinking that we need at this time. We are on the verge of a great revolution in military affairs and we need some new thinking to go along with all our new technology. Douglas MacGregor is the type of leader this country needs. He should be the type of person who makes Chairman of the Joint Chiefs, but his career will probably suffer because of this book.
Trustpilot
Copyright © 2022 Thriftbooks.com Terms of Use | Privacy Policy | Do Not Sell or Share My Personal Information | Accessibility Statement
ThriftBooks® and the ThriftBooks® logo are registered trademarks of Thrift Books Global, LLC