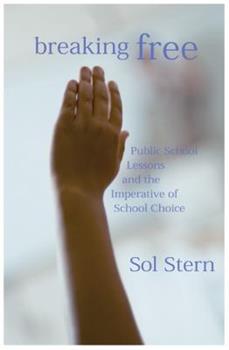 Published by Thriftbooks.com User , 13 years ago
This book starts quietly, with a personal look at the New York City schools, as experienced by the author as a child and as experienced by his own children several decades later. This section of the book is very powerful, precisely because it is non-ideological. Stern is not writing as a political theorist, but simply as a parent, trying to get a decent education for his children. This tone is powerful, in part, because Stern actually is a political theorist, for his day job so to speak; he is a journalist who was deeply involved in the New Left. Keeping that tone and that focus, Stern takes us, with his kids, through a tour of New York City's best and most elite public schools. The schools that his kids got into are the best of the best. And, while his kids managed to get a reasonable education at them, Stern shows us, in a very understated way, just how bad the system is, even in the best of the schools. The problem, fundamentally, is simple. The schools are not run for the good of the children. Instead, the schools are run for the good of the adults who have jobs in the school system. Exhibit A of this is how even a super elite school can not fire a grossly incompetent teacher, and can not hire an extremely qualified teacher who does not have the right credentials. In both cases, if you actually cared about the kids, the decision would be simple: fire the incompetent, and hire the gifted but unconventional teacher. But, in New York City, as in most of our large urban school districts, that common sense result is nearly impossible. Why? Because the union contract basically forbids firing tenured teachers, and takes a very rigid, uncreative approach to credentialiing. Why? It is simple. The unions wants its members to live without risk, to have guaranteed jobs and guaranteed security. From the union's point of view, that is perfectly logical and reasonable. After all, it is the union's duty to protect its members. But, the problem is that the union has an extraordinary level of political power, and no one within the educational system has the power to stand up to them, so decisions are made for the whole system, which are driven by nothing but the self-interest of the union. Stern then moves on to examine a number of successful alternatives to the public schools. He looks at the Catholic schools, as well as a mixed bag of voucher schools and charter schools. As he shows, these schools vary greatly, but many of them produce much better results than the public ones, simply because they are run for the good of the children, not as a jobs program for the union. Stern does a very good job of discussing the opponents to school choice. I am pretty familiar with this area, so I am very familiar with the writings of Jonathan Kozol, who is perhaps the most passionate opponent of school choice writing in America today. Kozol has written a series of books, which very dramatically and emotionally attack American schools for being r

Published by Thriftbooks.com User , 17 years ago
Listened to the interview with the authoron First Voice. A real interestingbook and interview.The interview is online There's a transcript for those using dial up.--J. R.

Many lessons work, some fail

Published by Thriftbooks.com User , 18 years ago
Breaking Free tries hard to be the one-size-fits-all destroyer of the public school temple. And it comes very close. But its ancestry as a bunch of shorter journalism, and its seemingly complete faith in principals, keep it from being perfect. Mr. Stern seems to believe that dynamic principals can single-handedly reshape a school. That is true to a point. But there are two problems he fails to address. One is that these dynamic leaders are hard to find, and even harder to identify. I worked for many years in public schools and knew many principals. Among the worst was a charming and pretty lady who knew the jargon, conveyed authority and confidence, and was "for the children." She was a PR prize, known in the community and valued as an "expert." She was also a very bad principal. Cronies were in positions of authority, cronies who were always "downtown" or "at a conference" but never around. She wanted everything to run wonderfully, and did not want to know anything about the details. So details were kept away. I am reasonably certain that standardized tests were "corrected" by the teachers, giving comparatively good scores to very weak students. Even in a world of choice, it would be hard to pinpoint her school as anything other than a success. Good scores, great leadership, happy staff. It all looked good. And it was all a charade.Principals have plenty of other ways of jiggering the books. And giving them additional unregulated power will only allow those with a deceptive streak to provide jobs for friends and lovers, keep critics away, and create personal fiefdoms where their word goes. So, though a dynamic, dedicated principal, willing to work slavishly long hours for low pay, may be the answer, just how many of those guys are there?But his devastating critique of the New York City public schools, with their entrenched unions that ultimately make the only rules that matter, and his comparisons with (admittedly selected) private schools doing far more with much less should be required reading for those who believe the Chicken Littles in the education world who run screaming whenever any change is proposed.Public education is a near-total failure. It is outrageously expensive. Teachers control the language of debate, the politicians pretending to debate, and the future voters, so their terms and their ability to exclude critics make them apparently invulnerable. But enough people are avoiding public schools, even the best ones, that change will have to come. I just hope we don't wait until the entire system is in ruins.

Cuts through the nonsense and gets to the point...

Published by Thriftbooks.com User , 18 years ago
It's beyond dispute that America's public schools, particularly in our cities, are failing to provide either an adequate education or an adequate socializing experience for children. The consequences are also well known: low self-esteem, poverty, crime... the gamut of ills attendant to relegating whole communities to the status of "underclass", unable to contribute to a 21st century economy.The reasons for school failure and how to significantly improve our public schools are frequently debated. Proposals include "raise teacher pay", "get more teachers certified by our schools of education", "build better schoolhouses", and the incredible demand, "send us better kids". With a parent's perspective and a keen eye, Stern sweeps aside all the self-serving nonsense and gets right to the point: if the public wants public schools to perform, then schools must be managed to achieve that performance. Management means a controlling authority (most importantly, a principal) with the power to select teachers and other staff who will collaborate to achieve measurable goals. In today's public schools, the principal's inability to hire, fire, or to define work content and compensation, is a fatal blow to any attempts to dramatically improve school performance.Stern goes on to document how, with $2 billion in annual dues and unprecedented political power that ranges from the local to the national level, the teachers' unions have dominated the political process. On the national and state level, wielding hundreds of millions of dollars worth of political clout, the teachers' unions have generally dominated the legislative process. On the local level, school districts are forced into signing labor contracts running to hundreds of pages, loaded with provisions that effectively eliminate teacher accountability and the principal's control. Talented teachers and principals are disgusted and often demoralized when they see their profession become a dumping ground for incompetence, protected by a union that only cares about teacher prerogatives, including the "right" not to be judged, and who actively obstruct any drive for standards of performance. Principals with enough integrity to put students' interests first must struggle with a morass of rules and procedures that would be considered farcical in the private sector. The teacher's classroom is a fief impenetrable to any objective evidence of success or failure.Stern focuses on the massive New York City public school system, where an antiquated administration is helpless to defend the interests of the individual school. In the case of Stuyvessant High School, where the City's finest students are assembled, Stern documents how an aggressively pro-student principal is "grievanced" into retirement by a diligent union representative wielding nothing more (or less) lethal than the teacher contract.Stern's primary concern is the fate of students from poor homes, where parents are unable to supplement their chi

The best book on schools. Period.

Published by Thriftbooks.com User , 18 years ago
This is a remarkable book. Part of it is the author's own story--how he grew up in NYC in the 1940s and, as the bright son of immigrant parents, attended the best public schools, which taught real skills and civic consciousness; and how his own children now attend the best public schools in the city (Stuyvesant, etc.) and face curricular chaos and the tyrannical incompetence of teachers who consider themselves union members more than instructors. In the second part of the book, the author goes looking for alternatives and stumbles on a Catholic school in his neighborhood where the students are all black. And unlike the underprivileged black kids imprisoned in the horrible NYC ghetto schools, these kids are learning in an orderly, humane environment. Stern completes his odyssey by going to areas like Cleveland and Milwaukee where choice has been institutionalized and he finds there more small educational miracles. He concludes that school choice is a moral imperative, the new civil rights movement of our era. This is an eye opening book. I did some research and discovered that some of the articles that Stern wrote while working on this book came to the attention of Mayor Rudi Guiliani and were instrumental in his decision to come out in favor of school choice for New York, a plan that the teachers unions killed. (Naturally).
Copyright © 2020 Thriftbooks.com Terms of Use | Privacy Policy | Do Not Sell My Personal Information | Accessibility Statement
ThriftBooks® and the ThriftBooks® logo are registered trademarks of Thrift Books Global, LLC