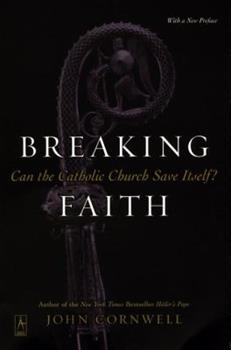 Breaking Faith: Can the Catholic Church Save Itself?

As John Paul II's papacy draws to a close, the Church, its policies, and its future are being scrutinized by governments, religious leaders, and millions of Catholics around the globe. The election of the next pope will have a greater impact on world affairs than that of the next president of the United States -or the leader of any single nation. In his controversial bestseller Hitler's Pope, John Cornwell eloquently expressed both disagreement with...

A thought-provoking and poignant look at Catholic issues

Published by Thriftbooks.com User , 18 years ago
Some reviewers have characterized this book as "Catholic bashing" and "liberal." These viewpoints are very short-sighted and, coincidently, are the very same viewpoints that led to many of the problems that are explored in this book. Like it or not, the Catholic church of today is facing many challenges. I need not go into these challenges here, but most people will know what I am referring to. These challenges arise not from the teachings of the Bible and traditional Catholic values, but they arise from the heirarchy's unwillingness to reform vital areas of the church and the heirarchy's unwillingness to listen to the majority of the faithful. The Catholic church must become more democratic and less centralized-- reform need not be equated with "liberalism." Cornwell lays out all these challenges and offers thought-provoking insight through sharing his own experiences, statistical facts, historical antecdotes, etc. Cornwell does not push for specific solutions; rather, he lets the reader contemplate how we can solve specific dilemmas. One thing is made clear: the church must change if it wishes to retain its credibility and its moral authority. Anyone who does not recognize this should consider whether they really belong in the Catholic church.

Published by Thriftbooks.com User , 18 years ago
There are many books out there on this topic, but I felt this was one of the best. Cornwell certainly has a progressive stance on the Church's situation, but he is far more balanced than other authors I've read (for example, he clearly shows how some of the anything-goes, "liberal" liturgies of the 1970s were as excessive in their way as the extreme right-wing dogmatism of today). The most disturbing part of the book, for me, was its discussion of the evolution of the papacy and the Curia under John Paul II. I had known that the current climate for questioning theologians is pretty grim, but I didn't know how grim: Cornwell cites many theologians who have questioned certain papal teachings, and as a result are forced to make public statements of assent to papal teaching and authority, or else face the consequences. He tells the story of a well-known British nun, author and radio personality, who wrote a book about the possibility of women's ordination, one that was written before JPII's letter prohibiting women's ordination. Her publisher was ordered by the Vatican to destroy all remaining copies of her book. She ended up leaving her order rather than follow the Vatican's command that she publicly assent to papal teachings on the issue. This is not only an unfortunate situation -- it's tragic. This climate of fear that lies over Catholic academics and theologians is nothing short of a death knell to the truth. When questions cannot be asked and freely discussed, the entire Church suffers. Moreover, it raises big questions of credibility: if the Pope will not allow any discussion on a topic such as women's ordination, it implies that the Vatican is aware that their stance is flawed and cannot hold up to scrutiny.As a committed Catholic, the future of my Church is at stake. Although many Catholics in the U.S., and in Europe in particular, have left the Church because of this and other issues, Cornwell's book made me all the more determined that my place is to stay and advocate for change. I love my faith too much to see it stray so far from the Gospel values of love, charity, and true justice. Luckily, I see these values lived large in my own parish community. I know that the Holy Spirit is present there; I trust that she will also guide the institutional Church in the years to come.

The Crisis of Hierarchy

Published by Thriftbooks.com User , 21 years ago
The Crisis of HierarchyJohn Cornwell's new book, BREAKING FAITH, juxtaposes the author's deep, personal, and moral concerns with the policies of the Vatican and Pope John Paul II's backward-looking position. Exploring step by step such burning issues as sexuality, marriage, the role of women, and the frozen hierarchical structure of, the Catholic Church, Cornwell's book demonstrates the need for institutional change. Like HITLER'S POPE, calling attention to the autocratic rule and tragic misjudgment of Pope Pius XII, BREAKING FAITH reveals that beyond any doubt, beyond any counter-argument, beyond, and even despite of, any mystical consideration, the Church must react to what has become its moral crisis. Using powerful arguments, the narration reveals how human greed, power-hunger, self-importance, self-righteousness, and fear of modernity have amalgamated with ancient convictions, perceptions, and rituals of the divine, and how this mixture of religious practice and doctrine has been preserved, acted upon, and reinforced by those in power over the years.The sweeping force of Cornwell's arguments also draws from the author's use of aesthetic shaping. Just like HITLER'S POPE, BRAKING FAITH reveals a literary structure that is rare in the world of contemporary historical investigations. Its underlying compositional element is a complex polyphonic interweaving of such distinctly diverging strains as the personal-vulnerable, the large spiritual issues of the tradition, and some of the gnawing moral concerns of our time. Such polyphonic treatment underlies also the chapter structures of the volume. Arriving at the incinerator of the monastery almost at the end of the book and thus evoking the fires of the Inquisition, the narration counteracts our expectation of the forward moving motion of history. Since the image of fire and ashes also recalls the Holocaust, the text evokes both the recent and distant past, the shadows of which seem to still fall on the Catholic Church. Also, with the penultimate chapter carrying the title of "Returning," the narration reiterates, and thereby culminates in, the issue of "strict hierarchy," which, as Cornwell argues, is the cause for the crisis that must be dealt with if the Church is to survive. Echoing this theme throughout, the narration enacts symbol and intellectual argument with equal urgency.BREAKING FAITH is a major study, shedding light on the Church's conflict between past and future.

Published by Thriftbooks.com User , 21 years ago
Differing religious views cause conflict with greater speed between family and nations than virtually any topic. With his book, "Breaking Faith", John Cornwell addresses trends in The Catholic Church and the circumstances that have resulted. Some will find him courageous, others will condemn his audacity/temerity to question, or to air issues within the church. The Catholic Church is a massive body of persons (est. 1 billion) spread over the globe, it must cope with the many cultures that have embraced Catholicism, a laity more educated than ever before, and tremendously diverse groups found within given cultures. The contemporary church is faced with members/potential members, who like an inquisitive child continually question why. The church is ill equipped to deal with its far-flung membership, for while results of Vatican Two remain the subject of debate, 40 years have passed, and the world has changed at a rate never imagined. Four decades is a brief moment for the church. For the laity it is two generations, a lifetime.The current Pope is a man of remarkable constitution. He has traveled more than any Pope, he has appointed 159 Cardinals of whom 135 would vote for the next Pope were a new Pontiff required. This latter number is again the highest in church history. He has nominated 2,650 of the church's 4,200 Bishops, has started more individuals toward canonization than any Pope, with 798 beatified and 280 canonized. His Pontificate is noted for its active nature and for one of integrity, of influence, as with the end of Communism in Poland, and the Pope's strength he continues to summon despite illness, age, and the shots of an assassin.His Pontificate, begun on October 16, 1978, marked the day that a historically young Pope, a Pope many believed would recognize the contemporary church, and while not becoming a liberal Pontiff, would be progressive on issues that were causing difficulty for the church. He has proven to be a conservative who has written widely and stated without ambiguity on issues of great import to Catholics, and the Vatican.This is where the divergence begins. Authority resides in Rome, and many believe what issues from The Holy Father is the beginning and end of discussion. Being Catholic is not a matter of dining al a Carte, one is either a participant or not. The evidence is there are great numbers who have left the church, and many that remain, but do so on their terms.The Pope has reminded his flock without ambiguity that issues like contraception, female priests, one's loss of position in the church if divorced, and the conduct required if remarried, has not changed, and to the extent he can, has written so as to ensure they do not change soon. This "time" would likely include that of the next Pope, as 93 percent of those who will choose the next Pontiff owe their position to the current one.How can a Pontificate be measured? Is this topic one the laity should contemplate? Whatever the answer, they have commented a

Published by Thriftbooks.com User , 21 years ago
Cornwell has eloquently described both his own journey through faith and the current state of the Cathlic Church. He had the courage to leave the church as a young man, when he genuinely believed that his faith was making him a narrow and loveless person. In middle age, he rediscovered his religion and became a returning Catholic. In the intervening years he has become increasingly alarmed at the defections and divisions within his Church. Most of all he is dismayed by the growing divisions within Catholicism which could lead to schism, especially in the United States. What is the answer? Cornwell argues that the whole Church must return to a state of genuine love: agape, the imperative to love one's neighbour as one self which is the only underpinning for a genuinely pluralist world. This is a timely book which should be read by Catholics and non-Catholics alike. Religion has its dark face, as well as its beautiful face. This book reveals the mechanisms which make religion antagonistic and violent. REad it.
Trustpilot
Copyright © 2022 Thriftbooks.com Terms of Use | Privacy Policy | Do Not Sell or Share My Personal Information | Accessibility Statement
ThriftBooks® and the ThriftBooks® logo are registered trademarks of Thrift Books Global, LLC