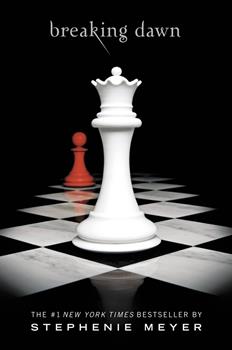 (Book #4 in the The Twilight Saga Series)

In the explosive finale to the epic romantic saga, Bella has one final choice to make. Should she stay mortal and strengthen her connection to the werewolves, or leave it all behind to become a vampire? When you loved the one who was killing you, it left you no options. How could you run, how could you fight, when doing so would hurt that beloved one? If your life was all you had to give, how could you not give it? If it was someone you truly loved?...

Review based on the condition of the book.

Published by ShaCal , 21 days ago
This book was listed as being in very good condition, but I would hardly call it acceptable. Very upset with the quality.

This was my favorite book in the series!

Published by andi brooke , 1 month ago
All the books I ordered from here were in good condition, I will definitely order from here again. I was surprised by the ending of it but also happy with it, order this book rn.

Published by Lynn , 1 month ago
Shipping was a little slow but when sent out to USPS it delivered fast! The corners of the book are bent and the cover is coming off a bit at the bottom of the book, none of the pages are ruined! I ordered a used book so of course it has minor problems but all in all it is in fantastic condition for paperback! Not so expensive like everywhere else. The book itself, I’ll be honest not one of my favorites to me the writing seems sloppy. However, no matter what I love the entire twilight book series, the plot is great.

Published by kitty , 1 month ago
finally got to complete my twilight series collection :)

Published by Noor , 1 month ago
The The book on the inside was not that bad but on the outside it was more of an acceptable quality it was torn up and a bit crumbled I gave it 3 stars because it was misleading but the inside of the book was not damaged so I’m still happy about that.

Published by Sabrina , 4 months ago
these books are absolutely amazing, and for all twilight fans these are so worth the read! You won’t be able to put them down I promise you that. There are so many details that were not in the movie and is written so well!

story is fine, EXTREMELY unhappy with book quality itself

Published by Kae , 4 months ago
I was hit by a wave of nostalgic longing and decided to buy this book. I chose 'acceptable' since I'd only read it once or twice, but the book is so badly damaged it's unreadable. it looks like someone tried to fold it in half, and the spine is so messed up the book rests at an incline. it almost falls apart when I try and open it

Breaking Dawn one of the best reads!!

Published by joeymarie , 5 months ago
Everyone from pre- teens to parents will love the twilight series. Breaking Dawn is a book I've been able to read several times over and love it more each year.. Breaking Dawn is a page turning book that. Will make it's hard book to put down.

Definitely not as described

Published by Sarah , 7 months ago
I ordered this book in the paperback form and was supposed to be in very good condition. I was sent a hardback that is falling apart. The other books I ordered in the same condition are in great shape. I'm very disappointed.

Published by Andy , 8 months ago
This still has to be one of my favorite series! Such a wonderful way to wrap up the story!

An excellent conclusion to an unforgettable saga.

Published by Jennnifer , 1 year ago
Having read the entire series a handful of times, I can honestly say that I am always just as enthralled as if I had just picked it up for the first time. Meyer has a way of capturing your heart and soul from the very beginning and never letting up until the very end. This book is full of beautiful writing and worth the read for anyone who wants to reignite the passion to eat up literature.

Published by August , 1 year ago
I love the twilight saga but very carefully read what you are ordering because I got the book in french.

Love the series, not happy with book damage.

Published by Thriftbooks.com User , 4 years ago
I'm happy it arrived in a timely manner but the book came banged up and ripped. I ordered a very good condition; I don't know if it was because the packaging or that's what was givin to me but I'm not happy it's like this.

Published by Thriftbooks.com User , 12 years ago
I Love it. I cound't stop reading. It's great, the feelings, the fear, the wander, every moment is special, is addictive. I want more from Edward and Bella.

Why do people bash books with happy endings?

Published by Thriftbooks.com User , 13 years ago
It's true this book wraps up loose endings, but I can't imagine why so many people think that's a bad thing. It's done over the course of the entire book, not in the last chapter. I laughed, I cried with happiness. I read things I'd predicted and many I hadn't. And then, at the end, I sighed in contentment. The Twilight-reading world would be screaming if we hadn't had details of the wedding, honeymoon, transformation, and Jake's resolution. We got to see the Denali clan, the Volturi make a nicely threating appearance, and everyone gets a happily ever after. Is that so bad? As a society we are programmed from middle school to consider anything with a tragic ending "literature" and anything with a happy ending a trite fairy tale. I LIKE reading books with happy endings. Sometimes I'm in the mood to read Doctor Zhivago, but I also appreciate well-written books that don't end tragically. That's Breaking Dawn. Reviewers are complaining that Stephenie Meyer is encouraging marriage at 18. Hello? She spent a great deal of time explaining that, to most people, early marriage is ewwwwwww. She also spent three books leading up to the circumstances that led to the marriage. Bella and Edward are not typical. Unlike most 18-year-olds, money is not an issue. They intended for Bella to continue her education (even if it were going to be delayed) and there was no expectation of pregnancy. I think it was a POSITIVE message, well argued on both sides. Also, why do people say it's anti-feminist for Bella to choose to keep her baby? Feminism is about allowing choice and not judging the mother. We were shown both sides -- Bella's unconditional love for her unborn baby, even at the risk of her own life -- and Edward's anguish and desperation at the thought of it killing her. If anything, Bella is more assertive in this book than in any of the others. Edward's always been possessive and protective. Remember him not allowing her to do things, like seeing her friends at La Push or even just being alone? He did it for love and because he was protecting her, but no one could say it was feminist. I highly recommend this book. It's meaty, satisfying, and well-written.

Relax and Enjoy the Fairy Tale

Published by Thriftbooks.com User , 13 years ago
Reading all these one star reviews is totally killing my post Breaking Dawn buzz, y'all. --Please note: this review contains spoilers, as most of the reviews here do. Bella's happily ever after is heart warming and tidy just like any other fairy tale you might enjoy from childhood, though with quite a bit more blood and (tastefully described married) sex. Many of these one star reviews criticize the happy ending, the early marriage, and motherhood in place of a college education, among various other complaints. I'm suspecting these reviewers would be much happier with an independent Bella who marches off in her human form to get a Masters degree in Psychology before marrying Edward. Or heck, not marrying Edward at all, and eschewing the idea of something so base and demeaning as becoming a wife or parent. Though perhaps it's more the youth of the heroine that causes their lament. I however, like happy endings and am thrilled she gets to be a mother. Yes, GETS to be a mother. Many people I spoke to who were in "Camp Jacob" expressed their reason: "Because she could have a family with Jacob". Well surprise, she had a family with Edward. Yes, Jacob imprints on Bella's daughter, but because imprinting on babies/children had previously been introduced in the series, I didn't find this at all unsettling. All this shouting about pedophilia is a little... intense for what really happens. Jacob makes it clear that it isn't a sexual thing at all while the object the affection is still so young. Jacob imprinting on "Nessie" means they all stay a family, which is what Bella wanted all along. Which brings me to another common complaint: Bella gets everything. Goodness! After fighting for it, tooth and nail, yes, she does. Isn't that what makes most of us smile at the end of Cinderella or Sleeping Beauty? Some have suggested that having Jacob imprint on someone else would allow Bella to make a sacrifice by finally fully letting him go as well as remove that feeling some reviewers have that she gets everything. I do see this point, and perhaps this happening would have made it a more critically acclaimed book, but as I was reading the story, I was fully involved in watching Bella's story unfold and these things did not negate my enjoyment of the book. As for the complaint that Bella should have gone to college first -- good grief, does she not have the rest of eternity to obtain as many degrees as she wants? This isn't real life, folks. For those worried about the impact this book may have on impressionable young teen fans, if you're allowing them to read the books at all (I know some parents aren't), why don't you read the book along with them and talk about the real life application of Bella's choices? Sounds like a great excuse for some good conversation. One complaint I completely agree with, Bella names her daughter Renesmee, which is hard to read, hard to pronounce, and impossible to spell. I'm amazed that made it past

Breaking Dawn Mentions in Our Blog