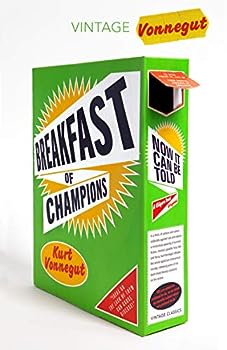 "Marvelous . . . [Vonnegut] wheels out all the complaints about America and makes them seem fresh, funny, outrageous, hateful and lovable."-- The New York Times In Breakfast of Champions, one of Kurt... This description may be from another edition of this product.

Published by DB , 1 year ago
I don’t know how they thought that this book was in very good condition considering half the cover was ripped off.

Published by ColeReadsStuff , 1 year ago
I love Vonnegut's work, and I was excited to read this one. It is a great book, but it was not in as good a condition as I expected, especially for $5. I've bought books here for $2 where at least the cover was intact. This one's front cover is fine, but half the back is ripped off as well as the flyleaf in the back too. Good book, just make sure to get in very good or like new condition.

Published by Thriftbooks.com User , 18 years ago
You know that anything goes once you pick up a work by the zany and terrific Kurt Vonnegut. The man knows how to dish up satire like none other. He'll spew out his complaints about the government, the world, people, etc., and instead of making it sound like a bunch of inane ranting he uses all of that to create a crazy world filled with outrageous characters and situations. "Breakfast of Champions" is an off-the-wall novel that is about 300 pages of pure hilarity and comedic chaos. Some of the most outrageous characters lie within this masterpiece.Listen: This story revolves mainly around two characters. There's Kilgore Trout who is an aging and bitter sci-fi writer that nobody has ever heard of (except for one person). His stories have only appeared in very adult magazines. So naturally, he has "doodley-squat" to show for it. The other person that this story is about is a car dealer by the name of Dwayne Hoover, a man that everyone in town considers a "fabulously well-to-do" person. Dwayne is losing his mind and is ever so gracefully slipping into the cozy and wonderful world of insanity. What pushes him over the edge will take place when the two meet and Hoover takes one of Trout's literary works as reality. The results are unforgettable and hilariously disturbing in this dark and offbeat tale of the flawed human beings who are destroying Mother Earth.This amazingly written book is completely ADDICTING. I easily finished it within a week. Once you start you do not want to stop reading until you have finished. Very rarely does a book have the power to make me laugh aloud so frequently and carelessly. People must've thought I was on something when they saw me laugh so uncontrollably while reading this in public. Vonnegut's commentary as the overall storyteller provides us with such an enriching voice that really is the star of the story. He has also created some of the most memorable and certifiably insane characters ever to be witnessed by the world of fiction. Vonnegut cleverly attacks everything that is wrong in society and he does it in such a funny and witty way. His illustrations also add a lot to the story as well.Reading a book like "Breakfast of Champions" reminds me why I want to be a writer. It also reminds me why we read in the first place. It is definitely a classic that stands on its own and will never EVER be duplicated. If you're looking for a "fabulously well-to-do" satirist that will never conform to the norm, Kurt Vonnegut is your man. If you have not read this book yet, I highly encourage you to check it out a.s.a.p.! It may not be your ordinary novel, but that's more the reason to read it, now isn't it? A definite new favorite that I will read again and again. -Michael Crane

A lyrical fugue on madness, modernity, art and love.

Published by Thriftbooks.com User , 20 years ago
Although not his most popular work, this is in my opinion Vonnegut's most brilliant novel. Superficially it seems childish, with it's inane illustrations (by the author) and rambling, seemingly unstructured text. But probe a little deeper and some truly profound insights emerge, and there is litle doubt that this is a work of carefully crafted, absolute genius.There are at least four main themes in this book, and the way Vonnegut weaves them together is both masterful and unorthodox. (In no particular order) the first theme is of madness - Dwayne Hoover has finally fallen victim to the chemicals in his brain, and much of the narrative unfolds around his descent into lunacy and violence. The second theme is that of the alienation of modern-day life, as a despairing Kilgore Trout makes his "Pilgrim's Progress" across small-town USA, and Wayne Hoobler spends the novel waiting pathetically for his dreams to come true while standing by a Holiday Inn dumpster. The third theme is on the meaning of all art, both in Rabo Karabekian's stunning exposition on modern painting, and on Vonnegut's own musings about the point of writing a novel (which occurs within the narrative). And the final theme, binding it all together, is that of love and connection. As is found in many of Vonnegut's works, he argues that the giving and receiving of love is the only thing that makes our otherwise meaningless lives valuable. Many people miss this point when they read Vonnegut, and hence come away feeling Vonnegut is a very bitter man. If you see this, you'll discover he is actually a deeply compassionate one. I have read this book many times, and each time come away with a new insight. Read it and treasure it.

Published by Thriftbooks.com User , 20 years ago
Kurt Vonnegut's novel "Breakfast of Champions" follows the odyssey of oddball science fiction writer Kilgore Trout from his melancholy childhood in Bermuda, to the sleazy underside of New York City, and eventually to a fateful encounter with car dealer Wayne Hoover, a man "on the brink of going insane." Within this framework Vonnegut weaves an amazing satiric tapestry that looks at racism, mental illness, environmental crises, the nature and function of art, and many other issues. The book is filled with Vonnegut's own quirky illustrations."Breakfast" is harsh, even cruel, but also tender and compassionate; it's laugh-out-loud funny, yet haunting and tragic. It's also a reality-warping metaphysical triumph; Vonnegut breaks down the barriers between reality and fiction, and invites the reader into the very process of the novel's creation. He creates a more intimate bond between author, reader, and fictional character than any other writer I can think of.Vonnegut presents some of American literature's most memorable characters in "Breakfast." But my favorite is undoubtedly Trout. Throughout the book we also get glimpses of Trout's own voluminous body of work, and meet some of his bizarre sci-fi characters. The book as a whole is also enriched by Vonnegut's unique style; he writes as if for an extraterrestrial audience to whom humanity is utterly alien."Breakfast" is a profane, naughty, yet profoundly spiritual book. Filled with strange and vivid details, it's an oddly comforting modern-day testament for our fractured world. Thanks, Kurt.

Vonnegut is Creator of my Universe

Published by Thriftbooks.com User , 22 years ago
Is it possible to say anything new about a book that has been in print for ~30 years, that has been read by millions, and which is widely studied in schools and universities?No... but I do want to say that I loved every word (and illustration). You can pick up this old novel and get a very fresh outlook both on the human condition and on how novels ought to be written. Vonnegut writes like he is explaining life on Earth to alien children. It is a tool that produces incredibly poignant satire, which he uses effectively to give commentary on conditions of life that the vast majority of us accept without even noticing. The language used is very simple but wonderfully lyrical, less-than-average readers will fly right through it.Although clearly sadenned by his life, and by his observations of the planet, Vonnegut wrote a masterpiece that remains hopeful in its despair.Kurt Vonnegut is a genius, and will no doubt be recognized as one of the 20th Century's greatest.
Trustpilot
Copyright © 2022 Thriftbooks.com Terms of Use | Privacy Policy | Do Not Sell or Share My Personal Information | Accessibility Statement
ThriftBooks® and the ThriftBooks® logo are registered trademarks of Thrift Books Global, LLC