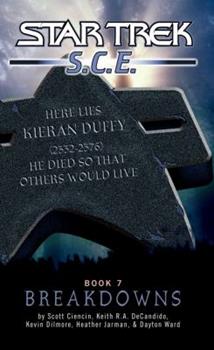 (Book #7 in the Starfleet Corps of Engineers Omnibus Series)

The surviving crew of the USS Da Vinci must try to recover from their devastating mission to Galan VI. Corsi returns home to try to mend a long-standing rift with her father; while Abramowitz becomes embroiled in a complex problem on a mysterious alien world. But Commander Gomez faces the most difficult test of all: how can she deal with her grief at the death of Lieutenant Commander Duffy?

Not your usual Star Trek book.

Published by Thriftbooks.com User , 13 years ago
There are four distinctly separate stories in this book. All of them are quite well-written; two of them are not TOO far from what we normally expect when we pick up a Star Trek book, two of them are. The previous book in the SCE series was different in that the "good guys", although triumphant, took heavy casualties rather than coming through unscathed. This book explores the emotional ramifications for the survivors of such an experience. Two of the stories (the one dealing with Corsi & Stevens, and the one dealing with Gold and Gomez) do nothing else. The one dealing with P8 Blue and the one dealing with Abramowitz, Falwell, & Soloman have relativey normal Sci-Fi plots overlaying the exploration of the characters' emotional states. Both approaches work quite well, although if you read Star Trek for the action and the Sci-Fi plots, you may be disappointed with two of the stories.

Published by Thriftbooks.com User , 15 years ago
Star Trek: Strafleet Corps of Engineers, Breakdown, Book 7 is a compilation of 4 short story e-books in print form for easier reading. "Breakdowns" has four stories in it and they are as follows: Home Fires wriiten by Dayton Ward and Kevin Gilmore Age of Unreason written by Scott Ciencin Balance of Nature written by Heather Jarman Breakdowns written by Keith R.A. DeCandido These are the e-books numbered 25 thru 28 in pocket books successful e-book series The Starfleet Corps of Engineers. After the zinger of a book called "Wildfire""Breakdowns" is a more subdued book as twenty plus members of the U.S.S. da Vinci have been killed at Galvan VI, the da Vinci is in drydock at McKinley Station around Earth for badly needed repairs and the crew that is still alive go for some badly needed shore leave. These stories deal with the personal side of the crew and how they deal with the fact that so many have died on the da Vinci. The first story "Home Fires" by Ward and Gilmore deals with Corsi and Fabin Stevens as they go home to Corsi's family and later book passage on a freighter that Aldo Corsi owns as he makes a cargo run and the elder Corsi and his Daughter have a heart to heart conversation about Starfleet and Corsi's uncle Gi. This is a well-told story and fills in the characters and makes them more human. Characterizations and a believeable story is what "Home Fires" is. The next story "Age of Unreason" by Scott Ciencin is a story about multible people, doppelgangers, as they wear a wrist band and can duplicate themselves to do many amazing things. The story is far fetched and is hard to believe as Carol Abromowitz, Bart, Soloman try to erect a null field to stop all of this madness. Carol is the main character and Bart and Soloman are used as seconadary characters to give the story a little believeablility. The third story is "Balance of Nature" by Heather Jarman and is the best of the four stories. It's about P8 Blue coming home to her homeworld and chaos breaks out. As we get a better picture of P8 Blue (Patty), we see the struggles she has gone through to be in Starfleet and her reception back home on her homeworld. We find out the there is another sentiant lifeform on Patty's homeworld and they are attacking the Nasat, as an ancient treaty long forgotten by the Nasat comes into play. The fourth story "Breakdowns" by Keith R.A. DeCadido is about how Captain David Gold reconciles the lost of twenty-three memters of the da Vinci crew under his command and the story fleshes out Gold and gives the reader insight into his personality and that there is a conflict to be resolved with Sonya Gomez making for some interesting reading. This book is NOT about how the engineers fix things as in previous books, but how they fix their respective lives in the wake of an extream trajady do to "Wildfire" and how they cope. This book is a storytelling book working on the characterizations, and filling in for the characters written about, making

Published by Thriftbooks.com User , 16 years ago
Containing four e-books documenting the aftermath of the incident at Galvan VI, Breakdowns takes a bit of a diversion from the usual engineering problem-solving that's defined the SCE series to go after more character oriented fare. For the most part, these stories are good. "Home Fires": Actually two stories in one as we see Corsi and Stevens visit her homestead and take a trip on a freighter. This story explores some of Corsi's history only mentioned in passing before. It's a quiet story that unexpectedly veers off into a flashback adventure set during the Cardassian conflict that explains Corsi's father's problem with Starfleet. Indeed, it does feel a bit unfair what Starfleet asked the Corsi family to do, but falls within the realm of the plausible that it gives the story some weight. The action was a nice surprise. One quibble though: Stevens goes to get food and her father tells Corsi to go find him after their heart-to-heart. We then go to the next chapter where she's going to his quarters, wanting to tell him about her talk with her father and Stevens is apparently just getting out of the shower. Now did she go find him in the kitchen and not tell him only to really want to tell him later? Just seemed like a snafu. "Age of Unreason": Certainly the weakest book of the anthology and probably the weakest SCE story since "The Riddled Post". This story was just simply half-baked. We really get little to almost no background or development of the featured aliens, the astral projection technology (a fascinating concept given frustrating short shrift) and the confounding and sudden rivalry between Abramowitz and her "arch nemesis", an evil culturalist (allow me to chuckle) so over-the-top as to never be believable in the slightest. The backstory on some supposed murder he was involved with was also confusing, making me feel like I was missing something. There's an attempt at a theme about power corrupting that feels borrowed from Lord of the Rings, but the story fails to draw me in to really care. Faulwell plays second string and Solomon appears in name only, making me wonder why the writer even bothered to include him. "Balance of Nature": Conversely, the best story of the anthology and probably the best Heather Jarman tale yet. It's far more focused and tight than her other works, which tended to bloat up on the worldbuilding and skimp on most everything else to really engage me. But here it's a very nice balance between worldbuilding and character work. Pattie has always been a favorite of mine, so it was great getting to see some serious development on her and her homeworld. I loved the idea of cities in the trees, especially around one massive tree, and it gave off an Endor-vibe that I enjoyed. It was nice getting a Federation world that's quite exotic. "Breakdowns": A nice way to round out these post-"Wildfire" stories, "Breakdowns" is a short story about Gomez and Gold coming to terms with what happened. Some of t

Published by Thriftbooks.com User , 16 years ago
I just love this book.I've been waiting 4 this book since wildfire came out.the authors in the book did a really good job.Though I wish I knew what happened beteween Wildfire book 2 and Home Fires.over i give this book 5 stars.
Copyright © 2020 Thriftbooks.com Terms of Use | Privacy Policy | Do Not Sell My Personal Information | Accessibility Statement
ThriftBooks® and the ThriftBooks® logo are registered trademarks of Thrift Books Global, LLC