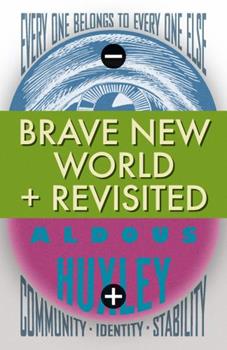 Now more than ever: Aldous Huxley's enduring "masterpiece ... one of the most prophetic dystopian works of the 20th century" (Wall Street Journal) must be read and understood by anyone concerned with... This description may be from another edition of this product.

Not the actual story, just commentary and summary.

Published by Sara , 11 months ago
Coles Notes on Brave new world & revisited. I thought that with the description, I'd have the original stories and a commentary, but I was wrong. There's summaries on the story, but not what I thought I was ordering.

Im only 4 Chapters in & I like it very much! ITS A CLASSIC, you gotta read

Published by Sam , 1 year ago
I had read a little bit of another version of this book that included pictures so I expected this to have pictures as well. However, the other book was a old library edition that costed over $100, This is good to read because you basically get 2 books in 1 It gives a pretty scary predicition of the future, since some of whats written here is now coming to fruition..

Published by Emmybird01 , 2 years ago
This was so different. I’ve never read anything like it. The story was so unique. If you are looking for a really different dystopian book, this is for you.

Published by Destinee , 2 years ago
I bought this book because it was required reading for my English composition class. I found that Huxley's ideas were incredible and complex, but at times the complexity was confusing. My professor said that one of his past students had burned the book because the student had hated this book so much, but I did not find it that unbearable, so I would say it's a good read. If I could only describe this book in one word, it would be "interesting."

One of the best books ever written

Published by Steph , 3 years ago
Seriously one of the best books ever written. Huxley was such an intelligent man who really understood society and it's amazing how life if very similar to this now.

Published by Thriftbooks.com User , 16 years ago
Huxley's classic tale of future dystopia seems to become more relevant with the passing of time. At its' original time of publication, some of the novel's social commentary was safety masked inside science fiction. Today's readers may relate more to Huxley's vision of over medicated, over-sexed consumerism. With topics like genetics, DNA testing and stem-cell research constantly in the news... perhaps the yuppies of today aren't so far off from the Alpha's of the future. The edition includes the novel, Brave New World, with the non-fiction work, Brave New World Revisted. This content is prefaced by a truly interesting foreword that offers some insights into Huxley's life and experiences. This edition also benefits from a psotscript section which includes interviews, commentary and a letter Huxley wrote to George Orwell (author of 1984).

Published by Thriftbooks.com User , 17 years ago
This was a novel that I had wanted to read for years and years, but could never seem to get around to it. I was not disappointed. This is a brilliant satire of a world where population control and social programming are taken to the extreme. All of the citizens are happy. The pursuit of pleasure and conformity are the goals in life. Mindless consumption is encouraged and people never age. If you have any troubles, don't worry, just take some soma. How could there be anything wrong with a society where happiness, sex and drugs are in overwhelming abundance? There is a loss of individualism, caring, passion, creativity and history among other things. George Orwell's 1984 was a great dystopian novel, but this novel written more than 70 years ago is, in my opinion, a greater warning. I am sure that Huxley would look at society today with complete disgust as we move closer and closer to his nightmare.

They don't get much better than this!

Published by Thriftbooks.com User , 21 years ago
You *MUST* read this book!Huxley wrote a masterpiece of a book in "Brave New World". "Brave New World Revisited" is a fantastic critical analysis of "BNW", how it differs with Orwell's "1984", and the world as Huxley saw it some 30 after the book debuted. His commentary and social criticism cut deep, and this cautionary tale is perhaps more applicable today than it has ever been (as evidenced in George W. Bush's reference to "BNW" in his speech concerning government funding of stem cell research).This surely is an important book. The amazing thing is, though, that even as such, it is a thrill to read. The dialogue is snappy, the narration rich, and the scenarios hilarious and frightening -- often at the same time. This is SF at its best. This is SF as literature.I cannot sing the praises of "BNW" highly enough. I will waste no more of your time talking about it -- use it to read this book instead!Recommended for: Everyone (even those who don't normally read SF)

Published by Thriftbooks.com User , 21 years ago
And prophetic, are the words that best describe Huxley's work in "A Brave New World". When you read the explanation to all psychological, economical, philosophical and social factors that lead to the creation of this book, in "Brave New World Revisited" you'll not only learn about all those subjects in great extent, but you'll realize how close to truth his fiction is. I am amazed at the genius of such creation in the first half of the twentieth century. Huxley's scientifical background is perfectly well constructed and perfectly well explained, A must read for anyone who calls himself literate.

A gramme is better than a damn, Aldous

Published by Thriftbooks.com User , 23 years ago
It's not as pessimistic as "1984" nor as cleverly metaphorical as "Animal Farm", but I hold both "Brave New World" and its cousin, the non-fiction analysis of Huxley's text ("Brave New World Revisited") higher in my esteem than either.Huxley himself was a brilliant man (what else can u expect, descending from Darwin's Bulldog himself?), and BNW is a brilliant novel. It's my favourite kind of book, just bursting at the seams with ideas and thoughts and theories, and told craftily through the eyes of a cast of intriguing characters.Because, aside from being a brilliant novel, such fantastic three-dimensional creations as Bernard Marx, Helmholtz Watson, Lenina Crowne and John the Savage will win you over forever. That's what makes this prophetic combination of BNW and BNWR so effective; the first shows you a startling vision of the future, and how it affects a wonderful cast you'll come to love; the second is a thought-provoking analysis written some years later, considering just how far the world has progressed towards achieving that 'utopia'. All kids should read this book at some stage. After all, we're the future (apparently), and this is a memorable example of what we do NOT want it to become.
Trustpilot
Copyright © 2022 Thriftbooks.com Terms of Use | Privacy Policy | Do Not Sell or Share My Personal Information | Accessibility Statement
ThriftBooks® and the ThriftBooks® logo are registered trademarks of Thrift Books Global, LLC