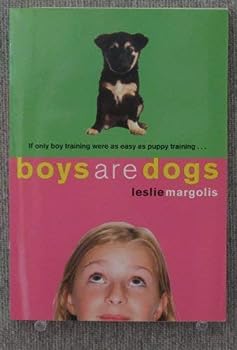 (Book #1 in the Annabelle Unleashed Series)

This description may be from another edition of this product. The book that inspired the Disney Channel movie Zapped , starring Zendaya When Annabelle returns from summer camp, her life is totally different. She's moving to a new house with her mom's new...

Published by Thriftbooks.com User , 11 years ago
Boys are Dogs By Leslie Margolis Boys are Dogs is a very interesting book about boys. I would highly recommend this book to any girl who wants a good read. This book is about a 6th grade girl who's life is about to change when it comes to acting and communicating with boys. Annabelle is NOT pleased when her mom decides to move in with her new boyfriend. This means a new house; a new school (with boys) unlike her old elementary school; a new puppy and making new friends. On Annabelle's first day she finds out that boys act like wild animals at her new middle school. They make up names, destroy her book report, and send her to the wrong classroom where she is kicked in the back of her chair all period by a boy seated behind her. Next her two lab partners either ignore her or tease her during class. When Annabelle comes home from her first day of middle school her mom and her new boyfriend have a big surprise for her, it's a new puppy. When she goes out to train her new dog, she finds out that training dogs is similar to how you talk and act around boys. She decides to read the training manual and discovers two main points that she learns, you need to act like the boss and talk firmly with short commands that are to the point. So she tries to take what she has learned to school and test it out on the boys in her class to see if it works? And it does, will it keep working on all the other boys or will she have to find other ways to keep herself from being tortured by the wild boys? My favorite part of the book was when Dweeble who is Mom's new boyfriend, left to Switzerland to visit a relative named Jason. Annabelle's mom brings home Chinese and they eat on the coffee table that Dweeble doesn't let anyone eat or drink on and they do a couple of other things they aren't supposed to in Dweeble's house. I learned that when you get a manual you don't always have to use it for what it's meant for. Like how Annabelle uses her dog training manual for boy training too. I would definitely give this book 5 stars!!

A must read for any girl

Published by Thriftbooks.com User , 12 years ago
Annabelle isn't too pleased when her mom moves her to a new house and new school so she can live with her new boyfriend. This new school is different from her old one in that it has boys, and as Annabelle learns pretty quickly, dealing with boys is NOTHING like making friends with girls. And then when Annabelle's mom and her boyfriend then get her a new puppy, Annabelle finds herself a little stressed out. But as Annabelle learns to train her new puppy, she sees some surprising similarities between training dogs, and training boys... Funny, wise, and a bit thoughtful, Boys Are Dogs is an innovative and fun-filled read. Annabelle is an engaging and relatable narrator whose perfect combination of smarts, independence, and shyness will capture even the reluctant reader's attention. Boys Are Dogs will have you roaring with laughter one minute and wincing with empathy the next. Margolis's unique talent of emulating her characters' ages and attitudes perfectly carries through in Boys Are Dogs and succeeds in establishing a bond between reader and author that offers empathy and comfort to young girls surviving the highs and lows of middle school, and a vivid trip down memory lane for older audiences. Margolis has created the ultimate must-read for tweens, packed full of fantastic advice, laughs, and a bunch of confidence-boosting girl-power.

Published by Thriftbooks.com User , 12 years ago
Boys Are Dogs Leslie Margolis Bloomsbury, Sep 2008, $15.99 ISBN: 1599902214 Annabelle comes home from a summer at a sleep-away camp to live in a new home with her single mom and her mother's new live-in nerdy but nice boyfriend. She is to start sixth grade so is old enough to understand when she is being bribed. They give her a puppy in exchange for her accepting the new arrangement. Annabelle adores her puppy, but school is a war zone as this is the first time boys (yucky) are in her classes. They are selfish, thieves and rude whether it is the kid behind her who is practicing for a football career with her chair; her lab partners who share nothing, or stealing her homework. In many ways without the cuteness they remind her of her puppy before the training. Annabelle begins to teach the boys how to behave with her using the puppy manual. The fun in this wonderful tweener tale is the behavior of middle school boys as seen through the myopic lens of the suffering heroine who is just starting to comprehend the Girls on Venus and the Boys on Mars make that Neptune concept. Applying a dog behavior manual as a modification tool is fun as Annabelle learns how to get along with the gender who makes Larry of the Three Stooges look like an Einstein. Harriet Klausner

Published by Thriftbooks.com User , 12 years ago
The author gets everything pitch perfect as she details eleven year old Annabelle's struggles with accepting her mom's new boyfriend, starting her new school, and training her new puppy. The story will by turns make you laugh out loud and wince in sympathy. Most importantly, you will cheer for Annabelle as she finds the courage to stick up for herself. This is a wonderful book for both kids and adults alike and contains valuable lessons for all of us.

Published by Thriftbooks.com User , 13 years ago
Annabelle comes home from summer camp to a lot of new changes in her life. She's moving into a new house with her mom's new boyfriend. They buy her a puppy in hopes that she will have a better adjustment. The puppy appears to be a bouncy ball of fur, but he soon gets into everything! Annabelle certainly has her hands full! Luckily, she has a book on raising dogs that should help. Going to a new school is another change in Annabelle's life. She had previously gone to an all-girls school, so for the first time she has boys in her classes. It only takes her a minute to realize that boys are dogs! One boy tells her to go into the wrong classroom, another kicks her chair in class, and her two lab partners either ignore her or make fun of her. Annabelle's book on training dogs proves to be a bigger help than she originally plans. She can use the tips with Pepper and also with the boys at school! She's got to make them all realize that she is the boss and the dominant dog of them all! This book was terrific! It was full of laughs and I enjoyed seeing what Annabelle planned to do next. She's a character who starts out unsure of herself but you really see her confidence grow in the book. This would be an enjoyable read for anyone, whether you are in junior high or just want to relive those memories! Reviewed by: hoopsielv
Copyright © 2020 Thriftbooks.com Terms of Use | Privacy Policy | Do Not Sell My Personal Information | Accessibility Statement
ThriftBooks® and the ThriftBooks® logo are registered trademarks of Thrift Books Global, LLC