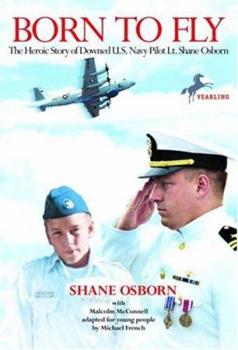 by Shane Osborn and Malcolm McConnell

Adapted for younger readers, this book tells the heroic story of Navy Lieutenant Shane Osborn. When a Chinese fighter jet collided with the surveillance plane piloted by Osborn, he landed it safely, saving the lives of his 23 crewmates. Accelerated Reader: Reading Level 7.9, 7 Points.

Published by Thriftbooks.com User , 20 years ago
I found this to be an extremely readable book. As a former Naval Aviator myself, I thought the description of life on board the aircraft was particularly good, especially in light of the fact that a lot of people who do not understand the environment would be reading this book.Some people will be put off by the heavy emphasis on his personal experience but must realise that he was not with his crew a large portion of the time.His description of conditions during the crew's captivity are well done without being either condescending or accusatory. Sometimes the writing is as if you were viewing this as a movie.I highly recommend this book to anyone who is interested in current events.

Published by Thriftbooks.com User , 20 years ago
This book is an inspiring true story of how a Navy pilot and his crew safely landed a crippled plane after a mid-air collision with a Chinese fighter jet and the 11 days of captivity they endured together. The true meaning of honor, courage, strength and a bond between the mission commander and his crew that was unbreakable under pressure; is shown throughout the book. Easy to read and not loaded down with military jargon that no one understands. Highly recommended for those interested in a story that shows the best in the military when under pressure. True Americans!

Published by Thriftbooks.com User , 20 years ago
Lt. Shane Osborn, is a real Top Gun, a Navy Pilot with all the right stuff!He has shown us the view from the other side with his eyes in this well written book, a biography and memoir, of the situation that he and his crew lived through, that many of us never imagined could happen inside an EP-3 plane. Then to carry on tremendous courage while held against their wills. Lt Osborn and the crew kept up their determination to stick together through it all.Plus, his early training and background helped him to overcome so many hurdles, obstacles and closed doors in which he has proven, that by working hard, you can succeed in whatever you put your mind to. This will become a classic Naval Aviator book. The book is enlightening rich with a historic look into the situation firsthand. I rate this a five star general!Fly Navy!

Published by Thriftbooks.com User , 20 years ago
Lt. Osborn describes his experience when his navy reconnaissance plane is struck by a Chinese fighter aircraft forcing Osborn to land his crippled plane in China. For eleven days the world watched as the Chinese asked the U.S. for an apology. This is the story from Lt. Osborn's view as he describes those eleven days in Chinese "captivity" with his crew of 23 officers and airmen. It's a fascinating story of the making of a naval aviator who is ultimately awarded the Distinguished Flying Cross for his courage and leadership during the ordeal. This is a story about the people who usually don't get a lot of publicity which makes you realize there is more to naval aviation than fighter pilots and aircraft carriers. In the end it's a timely story of standing up to adversity with honor, character and courage. Highly recommended.

Published by Thriftbooks.com User , 20 years ago
Born to Fly is destined to become a new aviation classic, in the same league as "The High and the Mighty" and "Island in the Sky." Lt. Shane Osborn is a true American hero, an inspiration to us all in these difficult times. Through his incredible flying skill and sheer gut-courage, Osborn saved his crew and his country's honor after a Chinese fighter collided with his EP-3 recon plane. We can all be proud of these fine young Americans. Read this book.
Copyright © 2022 Thriftbooks.com Terms of Use | Privacy Policy | Do Not Sell My Personal Information | Accessibility Statement
ThriftBooks® and the ThriftBooks® logo are registered trademarks of Thrift Books Global, LLC