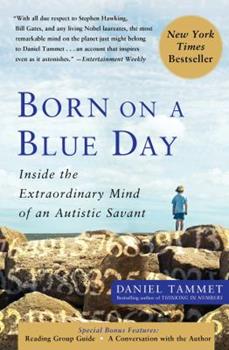 Born on a Blue Day: Inside the Extraordinary Mind of an Autistic Savant

A journey into one of the most fascinating minds alive today--guided by the owner himself. Bestselling author Daniel Tammet (Thinking in Numbers) is virtually unique among people who have severe autistic disorders in that he is capable of living a fully independent life and able to explain what is happening inside his head. He sees numbers as shapes, colors, and textures, and he can perform extraordinary calculations in his head. He can learn to speak...

Published by Thriftbooks.com User , 13 years ago
I found this book very insightful as it was written from the perspective of a person who has autistic spectrum disorder. Because of this twist I feel this book shed a more positive and hopeful outlook on the disorder itself, as well as for the people facing this challenge.

Truly Unique Perspective on Autism from the Subject Himself

Published by Thriftbooks.com User , 15 years ago
If a picture is truly worth a thousand words, then the savant gifts of Daniel Tammet are all the more startling because he has an ability to meld his senses together seamlessly to see things nobody else can. It's an impressive, even daunting prowess that comes at a high price since he has Asperger's syndrome, a neurological disorder that causes him to be limited in his ability to fit in with the larger culture, as well as synaesthesia, a condition where sounds, words or numbers can translate into colors, shapes or textures. In fact, the latter condition is reflected in the book's title as he associates the color blue with Wednesdays. What makes this book so thoroughly unique is that the book is not a treatise of a subject by a medical professional but a memoir by the subject himself. As such, there are no grand conclusions drawn about either medical condition, or scientific assumptions of how Tammet came to his gifts. What the author does quite plainly is share how he approaches such astonishing feats as reciting pi to over 22,000 decimal points over the course of five hours. We get a palpable sense of how he perceives theorems and automatically develops strategies based on his innate sense with numbers and images. But before you can say Rain Man, you also see a young man who is actually functioning in the world on his own, which illustrates perfectly the spectrum of severity with autism. Tammet's affliction has mild enough for him to be relatively self-sufficient, even though his struggles to gain societal acceptance have been a traumatizing road. Raised by loving parents, he spent most of his childhood alone and could only relate to fellow outsiders like immigrants and exchange students, people who heightened his facility for foreign languages. There were signs - a hyper-sensitivity to noise; almost complete literal-mindedness; a narrow but intense interests in a few, eccentric subjects at the exclusion of others; displays of socially inappropriate behavior (which he has since been able to manage); and peculiarities in speech and thought patterns. It all comes together as a fascinating portrait with no pretense toward a false sense of triumph over extreme adversity. Such clichés are better left to Lifetime TV-movies since Tammet lives a good, simple life in London with his life partner Neil Mitchell and is busy creating a new language and conquering other mathematical frontiers. One cannot help but root for him thanks to his wonderfully personal, unaffected memoir.

An astonishing book that will touch and warm your heart

Published by Thriftbooks.com User , 15 years ago
This is an astonishing book, written in first person. It is a memoir of the author's life with the "synaesthesia and savant syndrome", a rare form of Asperger's syndrome. People with synaethesia see numbers as forms with color and texture, and days as vivid colors, and so Daniel Tammet has the ability to see in his mind numbers and days as colors, each number and day having its own distinct color as an attribute. A day with a color, like a flower with a scent! The blue day of the title of this book refers to Wednesday, which, like the number nine, he sees in his mind as blue. "I know it was a Wednesday," narrates Tammet, "because the date is blue in my mind and Wednesdays are always blue, like the number nine or the sound of loud voices arguing." Daniel is also a savant, with a remarkable ability to multiply and divide given numbers with astonishing speed. He can recite from memory the number pi, 22 divided by 7, or 3.1428571 to 22,514 decimal places, a feat which will take him a little over five hours! He says numbers are beautiful things, and that pi is as beautiful as Mona Lisa. Like Christopher John Francis Boone, the fifteen year old hero of Mark Haddon's novel, "The Curious Incident of the Dog in the Night Time", Daniel, too, is very fond of prime numbers. "Prime numbers feel smooth, like pebbles," he says. He can recognize every prime number up to 9,973. He can speak in ten languages, including Icelandic, Lithuanian and Welsh, and he has the ability to learn a new language within a few days. He learnt Icelandic, for example, within a week; a most remarkable feat for any human being. He doesn't understand jokes easily, and the expressions on human faces he finds baffling. And like Christopher, he doesn't like to be touched. He is perhaps the only person in this world with the "synaesthesia and savant syndrome" who has written a book in his own words, without using a ghost writer. What causes this syndrome is a mystery to neurologists; they have been trying to unravel the mystery, so far without much success. They speculate that a series of seizures Daniel suffered in his childhood might have caused the savant syndrome. But this is just their speculation; no one knows the real cause. For a man who sees numbers and days as colors, this book is written in a simple, bland, colorless prose. Nevertheless, reading this book is a marvelous and rewarding experience. This book will touch and warm your heart.

Moving on many different levels

Published by Thriftbooks.com User , 16 years ago
I literally finished reading this book an hour ago. Daniel's story is both moving and inspiring on a multitude of levels for all those who are considered different --- irrelevant of which form that difference might manifest itself. He is a truly remarkable man with an even more remarkable support network. The style of the book is intimate and honest in both style and content. It is not often that I genuinely feel intense emotions when reading and I admit that a few times I literally had to put the book down and walk away from it for a while. Thank you Daniel for being you.
Trustpilot
Copyright © 2022 Thriftbooks.com Terms of Use | Privacy Policy | Do Not Sell or Share My Personal Information | Accessibility Statement
ThriftBooks® and the ThriftBooks® logo are registered trademarks of Thrift Books Global, LLC