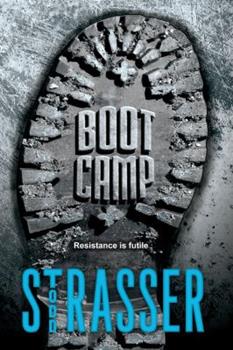 From Todd Strasser, a "truly shocking" ( Kliatt ) account of the prison-style workings of teen boot camps. Garrett is an average fifteen-year-old, except that he's in love with an older woman. Even though Garrett gets good grades and hasn't had any real discipline problems, his parents decide to ship him off to Harmony Lake, a boot camp for teenagers. He is "kidnapped" by camp employees and transported there, where after a painful attempt at rebellion...

Published by Thriftbooks.com User , 12 years ago
how could one not fall in love ith this booki hated reading more than anything and my teacher said i no you hate books but i think youll love this one and i said like the last 50 well anyays i started and it was like i couldnt stop i was hooked this changed the ay i felt about reading 360% percent i love this auther and recomened this book to any one its amazing you feel like your garrett or any of the charecters its soo discretive the ending was by far the best part i felt the emotions it was weard but in a way it helps you see how good you have it

Published by Thriftbooks.com User , 12 years ago
Book Review- Boot Camp The book boot Camp is totally rated 4.5 stars out of 5. Garret, the main character, gets sent to Boot Camp because he was being disrespectful to his parents and having a secret affair with his teacher. When he gets sent to Boot Camp, which is called Lake Harmony, he realizes how horrific it actually is. In his first couple days there, he doesn't quite learn his lesson when he first arrives there. Garret thinks to leave Lake Harmony all he has to do is follow the rules, but he is wrong. Garret gets sent to T.I. many times and always ends up getting sent back. During a long period of his stay, he starts to learn what he does is wrong. But it isn't till he does something very bad that he learns his lesson. At the end, his parents come to get him and they ask him if they did anything to him, he answered yes. But then he says that he deserved it. And he might not seem like an Antagonist.

Couldn't Put it Down!

Published by Thriftbooks.com User , 14 years ago
I was completely immersed in this book from the first page! High schooler Garrett is kidnapped by "transporters" in the middle of the night and sent to the ironically named Lake Harmony which is actually a teen boot camp. Garrett is subjected to an ever-increasing level of abuse at the hands of other detainees (who have already been brain washed by the camp) and counselors until he and two other prisoners hatch a dangerous escape plan. The novel is told in the first person and Garrett's experiences are shocking and realistically drawn. As I mentioned on a previous comment, I was surprised at the lack of adult content in this novel (considering the subject matter). There is very little cursing, no sexual content, and the violence is in keeping with the theme of the story. Although this book certainly wouldn't be appropriate for younger kids (if for no other reason than the difficult themes represented), I would highly recommend this book for teens and particularly reluctant readers. After page 100, I was glued to this book.. if reluctant readers react to it with anywhere close to the same level of enthusiasm, they're in for an exciting and harrowing story!

Published by Thriftbooks.com User , 14 years ago
"We stop before a tall chain-link fence topped with loops of razor wire. A man steps out of a small white booth and shines a flashlight into the car. Rebecca shields her eyes from the glare. I have to turn my face. The man seems to recognize Harry. He unlocks the gate and we drive through, past a dark basketball court and a bare flagpole, and pull into a gravel parking lot. " 'Here we are.' Harry jumps out of the car with unexpected energy after the long ride. He comes around to my door and pulls me out with a firm grip. After sitting in that awkward position for so long, my legs and back are stiff, and I straighten up unsteadily. But I also feel a brief wave of relief, as standing temporarily takes the excruciating pressure off my bladder, which has felt near bursting for at least half an hour. I shake out my legs and glance around. " 'Trust me, blue blood, don't be thinking about running, Harry warns. 'Even if you got through the fence, there's nothing but forest out there. You're so far away from civilization, you'll starve before you see another human being.' "The air is cool and smells like pine. The chatter of the crickets is almost as loud as traffic on a city street. In the dark I can make out four or five buildings, none more than two stories tall. "Then the crickets go silent. "And I hear the screaming." As Todd Strasser explains in his Afterword, there is a secret prison system for teenagers in the U.S. Any parent with enough money can place his or her child in this prison system for any reason or for no reason. The facilities are called boot camps. The methodology in these prison camps can include physical and psychological torture, along with total isolation from people and information out in the real world. Instead, the prison becomes the world. Some of these facilities have now been established outside of the U.S. in order to avoid any possibility of government oversight. These boot camps yield big bucks for their owners. With what they are being paid each month by parents, there is no financial incentive to have kids "graduate" until they are irrevocably broken down psychologically, and thoroughly trained to listen and obey without question. And it pays to do whatever it takes to give the parents satisfactory results. In Todd Strasser's BOOT CAMP we share the nightmare experience of Garrett Durrell which begins when his parents have him kidnapped and delivered to Lake Harmony, a boot camp in Upstate New York. Garrett is a gifted and talented adolescent who knows how to maintain the 3.8 average he needs from his exclusive private school -- in order to gain acceptance to a name-brand university -- without breaking a sweat. But his parents apparently fear the tarnishment of their posh reputations due to Garrett's refusal to terminate his relationship with a young woman who had been a new teacher at his school (until his mother got her fired). " 'You're just a punk kid with a crap attitude, and you don't know squat. When are y

Published by Thriftbooks.com User , 14 years ago
It seems that every time I turn on the TV, there is some program about teen boot camps or wilderness survivals programs designed to straighten out even the most delinquent of teens. Todd Strasser, author of Give a Boy a Gun and Can't Get There from Here, has written a book that takes the reader inside the boot camp experience. Garrett is from a rich family and goes to a good private school where he is a straight-A student headed for an Ivy League college. He has experimented with smoking pot, but he's definitely not a "pothead." According to his parents, his one unforgivable offense is his sexual relationship with one of his teachers, a woman eight years his senior. According to Garrett, his choices just don't reflect what they want from his life. He thinks his grades and the fact that he stays out of trouble should be enough for them, but because of Garrett's refusal to end his relationship with the teacher, his parents send him to Lake Harmony. Lake Harmony's staff practically guarantees success. They promise to take any wayward teen and make them the child their parents always wanted to have. On the surface this sounds like quite a deal; however, the teens learn quickly what lies beneath the surface. Lake Harmony offers nothing but torture, brainwashing, poor living conditions, disgusting food, and limited parental contact. Teens in the program spend anywhere from one to three years suffering in this boot camp until most are finally released with broken, damaged spirits. Strasser takes readers inside the camp where they meet Garrett, Pauly, and Sarah. Although Garret hasn't been there as long as Pauly and Sarah, the three form a special bond and vow to escape before the camp kills them. While reading BOOT CAMP, I found myself gasping at the abuse and needing to set it aside to digest the horrors visited upon these teens. The details are vivid and raw, and, unfortunately, probably more true than anyone would like to believe. Just as many of Strasser's books do, this one will stay with you long after you finish the last page. Reviewed by: Sally Kruger, aka "Readingjunky"
Copyright © 2020 Thriftbooks.com Terms of Use | Privacy Policy | Do Not Sell My Personal Information | Accessibility Statement
ThriftBooks® and the ThriftBooks® logo are registered trademarks of Thrift Books Global, LLC