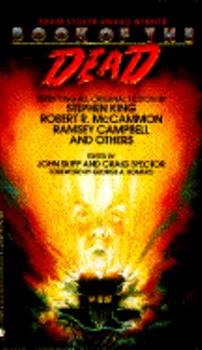 The Book of the Dead

(Book #1 in the Book of the Dead Series)

Read copy, but a couple of faint shelfwear spots on cover. This description may be from another edition of this product.

Published by Thriftbooks.com User , 17 years ago
This is a highly unusual collection of horror. At least a couple of the stories in the collection: "A Sad Last Love At The Diner Of The Damned" and "Across The Cadillac Desert With Dead People", are cult classics. The rest are at least well written and interesting. This is, however, out of print and somewhat hard to find. Also, beware, it is an extremely graphic and gory collection in terms of horrific, and sometimes sexual, content.

You Won't Be Able To Put It Down

Published by Thriftbooks.com User , 19 years ago
If you've enjoyed Romero's Living Dead movies, you'll want to read this. Some of the stories are good and the rest are great. I picked this up and went cover to cover in 3 days. Gore and more and you won't be sore.

Published by Thriftbooks.com User , 20 years ago
I've been reading horror fiction for years, and this is the only book that has given me nightmares. If you're into no holds barred horror, this is the one for you.

If you can find it, then by all means buy it!

Published by Thriftbooks.com User , 23 years ago
Right now I am a rather heavy fantasy reader, but there is still one horror book that I treasure highly, and that is Book of the Dead. Has all the zombie mayhem that I've enjoyed with George Romero's films. Some stories have great action, some are very chilling, and some even are a bit tragic and insightful. Oh yes, and it has tons of blood and body parts flying about. So, if you can find this book anywhere out there, and are at all interested in the living dead, GET IT!!!

Fan of George Romero's "living dead" films? Then read this!

Published by Thriftbooks.com User , 25 years ago
When I first read "The Book of the Dead" in 1992, I realized that while George Romero's film had been great, they hadn't really given us another aspect of what life (un-life?) would be like in a world overrun by the dearly departed. The short stories found in the book, from authors such as Stephen King, Robert McCammon, Ramsey Campbell, and Steve Rasnic Tem among others, were able to feed the over-active mind of this humble reader. As the book progressed from story to story, one can't help but play what-if scenarios in one's head. What would one do if the dead came back to life? Would one be as brave as the heroine in Stephen King's short story? Or if the undead still kept their wits, would one sell out to them as the character in Brian Hodge's story? Playing what-if scenarios is great, but just like the parable about the seeds and fertile soil, an active imagination needs a little help every once in a while. "The Book of the Dead" provides the seed needed to get said imagination going. The big question is. . .are you willing to receive such seed and let it grow in your mind? Are you ready to experience un-life beyond that of the "living dead" films?
Trustpilot
Copyright © 2022 Thriftbooks.com Terms of Use | Privacy Policy | Do Not Sell or Share My Personal Information | Accessibility Statement
ThriftBooks® and the ThriftBooks® logo are registered trademarks of Thrift Books Global, LLC