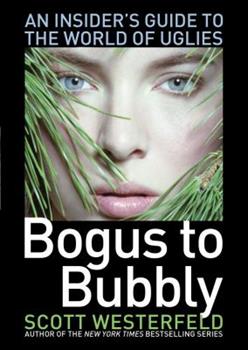 Bogus to Bubbly: An Insider's Guide to the World of Uglies

(Part of the Uglies Series)

THE WORLD OF UGLIES, SET IN OUR NOT-SO-DISTANT FUTURE, is a complex place filled with bubbly technology and lingo, yet bogus rules about status and appearance. That's why a guide to the world of uglies has been requisitioned from the hole in the wall. Inside you'll find: A rundown on all the cliques, from Crims and Cutters to tech-heads and surge-monkeys The complete history, starting with the destruction of the oil bug to the launch of Extras in...

Published by Thriftbooks.com User , 12 years ago
I loved the Uglies series and got this before I finished Extras but didn't read the guide until now (and make sure you read Extras before reading this). Its a really good guide, it had a part like a history book, and there was a part that was an instruction manual and it was just really cool. If anything I liked it more than I expected (because I'd never read a guide before so I wasn't sure what to expect). And it kept me hooked almost like a book. When I finished a chapter I always wanted to read the next one because each of them was something I was interested in and was really excited to learn about.

Published by Thriftbooks.com User , 12 years ago
My children really enjoyed the Uglies series. So much so, that I decided to read it too. I actually enjoyed all the books and looked forward to this one as well. The book was good for several reasons. It shed a welcomed light on many things from the main series. For example, it explained more fully what a hoverboard and a sneak suit were and how they worked. It was also interesting to learn about the character histories. For example, how the pre-rusties came to be and what happened with them. It was also interesting to read, from the author's point of view, how these kinds of things could happen with us eventually if we're not careful. Another reason I enjoyed this book was because I normally love Scott Westerfeld's books and I liked learning about where and how he gets his ideas for the character's names and what their communities are like. I also liked that this book pointed out things from the other books that I didn't notice like each of the first three books ending with the title of the next book, or in the Specials it was ugly. Or that all of the books started with someone crashing a party, even though it was so obvious I still didn't notice it. Bottom line - This is a great read for the teen in your life. The series is engaging and keeps them reading. (well into the night sometimes!)

BOGUS IS BUBBLY WITH FAN INFO

Published by Thriftbooks.com User , 12 years ago
"Bogus to Bubbly: A Guide for the Fans" A Review of Scott Westerfeld's Bogus to Bubbly: An Insider's Guide to the World of Uglies By Alexandria DeMeritt Bogus to Bubbly is a guide written by Scott Westerfeld about his Uglies series. If you have not read the main trilogy- Uglies, Pretties or Specials- or the fourth novel, Extras, this book is not useful for you. If you are in the middle of the series, it is especially advised that you avoid purchasing this- it contains spoilers from every book in the series. In other words, Bogus to Bubbly is for the fan who has purchased all of the Uglies books and is hungry for more. It isn't necessary for understanding the series. I've noticed that each of the sections of the book can be put in one of two categories. The first category is the "retelling" category. It basically retells and recollects information scattered throughout the fourth books, embroidering it with a few more details not found in the novels. For example, the "History of Tally's World" section describes the events that precede the novels (but are still discussed in the series), the events of the four books, and the immediate future after the end of Extras. It adds a few details that I do not remember reading about in the books. However, for the most part, it discusses things already found in the book series. These parts make interesting reads; however, the original novels are far more interesting then these "Retold" categories. The second category is what I like to call the "behind-the-scenes" category. These categories primarily discuss Westerfeld's inspirations behind the series. He goes out of his way to show us that, despite being set off in the far future, many "sci-fi" details of the Uglies series occur today. Two of the largest responses to fan questions are "Where did you get the idea for this series?" and "What is pretty?" My favorite sections of the book, the three "Science" sections, discuss the scientific background behind many details in the series. The book, itself, is cleverly written. It frequently changes points-of-views. Some sections are written from Scott Westerfeld's personal expressions. Others are written as if they are a futuristic manual. It is an intriguing variety.

Published by Thriftbooks.com User , 12 years ago
I gobbled up this compendium of interesting tidbits which give added insight into the popular young adult series by Scott Westerfeld. I first read Uglies, Pretties (Uglies Trilogy, Book 2), Specials (The Uglies), and the Extras (The Uglies) when my three teenage daughters were passing them around our house, and bringing up the plots of the books at the dinner table. I found the series to be imaginative science fiction with some very provocative themes about the perceptions of youth and beauty by society. I love books which give added insight into favorite fiction. One truly fascinating section of this book tells how the author got his idea for the series. It concerns a friend of his who moved to Los Angeles, and went for a check-up with a new dentist. The dentist wanted to put this friend on a five-year improvement plan for his teeth, promising that at the end of that time (and presumably after investing thousand of dollars), he could end up with "Tom Cruise teeth." After that, the friend started noticing as he walked around the city, that he could tell what year someone was on -- as in: "That woman must be on Year Two." or "That guy must have finished the five-year plan." After hearing his friend's story, Westerfeld started wondering what a society would be like which expected everyone to get on a pre-planned course to improve their looks and conform to a societal norm of beauty. Thus was born the Uglies. I loved this book, and so did my daughers. I recommend it highly for fans of the series.

Published by Thriftbooks.com User , 12 years ago
If ever a teen series could use a guidebook, Uglies was it. Set in the future with light sci-fi, there are a lot of things that couldn't be extensively delved into to since it's a teen series. So for the more curious, Bogus to Bubbly provides background for the science-laden world, from the hoverboards and equipment to the portable dehydrated meals. More interesting was learning about Scott Westerfeld's interest with anime, manga, and the Japanese culture. Even to a fan of that sort of thing, it wasn't blatantly obvious (as in Holly Black's Tithe series), but the hints were there. And the guide to creating slang should be of great interest to writers. Highly recommended to fans of the series.
Copyright © 2020 Thriftbooks.com Terms of Use | Privacy Policy | Do Not Sell My Personal Information | Accessibility Statement
ThriftBooks® and the ThriftBooks® logo are registered trademarks of Thrift Books Global, LLC