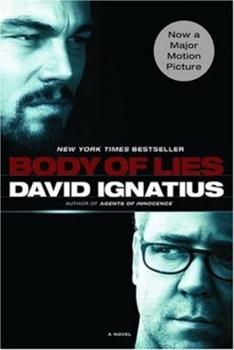 CIA soldier Roger Ferris has come out of Iraq with a shattered leg and an intense mission--to penetrate the network of a master terrorist known only as "Suleiman." Ferris's plan is inspired by a masterpiece of British intelligence during World War II: He prepares a body of lies, literally the corpse of an imaginary CIA officer who appears to have accomplished the impossible by recruiting an agent within the enemy's ranks. This scheme binds friend...

Masters of the Game

Published by Thriftbooks.com User , 14 years ago
Not since the days before John LeCarre forgot which side of the Cold War he was on has spy fiction been written with such authenticity. For just as LeCarre's everyman George Smiley debunked images of swashbuckling secret agents swilling martinis in Monte Carlo casinos, David Ignatius' "Body of Lies" paints a realistic portrait of terror and espionage in today's war of survival between the West and radical Islam. Roger Ferris is a CIA operative, returned to the Middle East after an Al Qaeda RPG nearly took his life, leaving him with a shattered leg and a permanent limp. In this fictional tale of today that could easily be the headlines of tomorrow, Al Qaeda his notched up the terror from Baghdad to the streets of Milan and Frankfort, begging the question of how long before car bombs ignite Chicago and Denver. Behind the escalated violence is a shadowy Al Qaeda operative known only as "Suleiman", an unusually evasive mastermind of terror who, despite patiently painstaking effort, the allied intelligence services have been unable to track. Loosely teamed and partnered with the urbane and deadly Hani Salaam, the formidable Jordanian spymaster, Ferris, inspired by British tactics in the face of superior WWII Nazi power, initiates a clever ruse in an attempt to trick Suleiman into showing his hand. With Britain's legacy of "The Man Who Never Was" and some help from Special Forces to procure a suitable corpse, Ferris and Company build the legacy of a fictitious special agent, fabricated to make it appear that he has infiltrated Suleiman's web of butchery. With this setup, twenty-five year veteran of the Middle East for the Washington Post-David Ignatius spins an insightful tale of spy craft and the delicate relationships between the US and our friends and foes in that powder keg of the eastern Mediterranean. Charged with CIA technology that would have 007 and gadget guy "Q" drooling, clandestine black operations, and a balanced treatment of Mid-eastern politics, Ignatius builds a powder keg page-turner of his own. And while told from a different vantage point, "Body of Lies" is definitely up to par with David Silva's gripping, authoritative, and brutal drama capturing the struggles of the troops in the trenches of the world war that we'd prefer not to acknowledge. As relevant as the daily headlines and as suspenceful and entertaining as the best fiction on the market, Ignatius has hit a home run with this one. Don't wait - but the hard cover.

Published by Thriftbooks.com User , 14 years ago
At a time when there are so many superb thriller and spy novel writers -- Coben, Peliciano, the still superb Le Carre and others -- it's rare to come across a book that outbests the best. Body of Lies is extraordinary. Ignatius has a complex plot that he weaves superbly -- the thriller element. More than most great plotters, his characters are far more than just chess board pieces -- this edge is the Le Carre element. They come alive -- from the hero to the villain and most of all the elliptic Jordanian Intelligence Service chess master. Ignatius is a fine stylist. His prose moves measuredly and simple; there's not a cliche, waste of words or fluff. Perhaps the most distinctive aspect of the book is how the moral and personal dilemmas of the hero are so intrisically woven into the thriller plot and vice versa. It is very compact and moves forward with a precision and flow that makes it just the right length at just the right flow. The story is a good one, with feints and elliptic teases. It pulled me in to the degree that my mind was constantly involved in trying to anticipate the next weave and surprise. Unreservedy recommended.

David Ignatius does it again

Published by Thriftbooks.com User , 14 years ago
As a longtime -- and unabashed -- fan of David Ignatius' novels, I was looking forward to his newest book. And what a superb read it is. David does not disappoint. This is thriller writing at its edgiest, and most compelling.

A GREAT READ - HAUNTING IN ITS VERY REAL POSSIBILITY

Published by Thriftbooks.com User , 14 years ago
Body of Lies is surely an apt title for this taut thriller from Washington Post columnist David Ignatius because for starters - a body is needed, a dead body. Not just any corpse, mind you: "It took nearly a month to find the right body. Roger Ferris had very particular requirements: He wanted a man in his thirties, physically fit, preferably blond but certainly and recognizably Caucasian. He should have no obvious signs of disease or physical trauma. And no bullet wounds, either. That would make it too complicated later." Complicated is a mild description of what is to come later as Roger Ferris, one of the CIA's top operatives in today's war on terrorism, is assigned to Jordan following wounds he received in Iraq. To date no one has been able to net Suleiman, the Muslim terrorist behind car bombings throughout the world. He's hidden deep in the desert, unapproachable, invisible. Ferris is an idealist, determined that 9/11 won't happen again and to this end he initiates a complex scheme used by the British in their war against the Nazis. The British World War II plot was called Operation `Mincemeat," a clever stratagem that allowed the British to feed false information to the Nazis through the dead body of a decoy British agent. Ferris's ploy, dubbed "taqiyya" (ancient Arabic for a necessary lie) is intended to convince Suleiman that American agents have already worked their way in to Al-Qaeda, and he is in danger. Risky? Undoubtedly, but Suleiman must be stopped and so far American efforts have been slow, ineffective, and riddled with errors. Film rights for this powerful novel have already been acquired by Warner Bros. Rightly so, as David Ignatius can write with a keen understanding of CIA operations and international terrorism. He has studied and covered both in his 25 years as reporter, foreign correspondent, and editor. He's a strong writer, and his story is a gripping one made even more compelling by its probability. Highly recommended. - Gail Cooke

A spy story from the front lines of the Long War

Published by Thriftbooks.com User , 14 years ago
BODY OF LIES is startlingly contemporary--a story of the front lines of the intelligence war against Al Qaeda by a journalist who has covered both the CIA and Iraq for a quarter of a century. It is at once sobering, touching and invigorating. Fans of Ignatius's earlier works should know that this book is his best; those who have not yet discovered this prolific spy novelist (whose day job is as columnist for THE WASHINGTON POST) should do so. Inside a detailed and authoritative story of how both Western and Arab secret services fight what has been called "the long war" against violent Islamic terror, Ignatius has created a story of identity in the hall of mirrors that is the contemporary Middle East, and a love story that is powerful in its evocation of the ways that love can make us treasure life, and at the same time lay it down for those we love. Cancel your weekend plans; you won't be able to put BODY OF LIES down.
Copyright © 2020 Thriftbooks.com Terms of Use | Privacy Policy | Do Not Sell My Personal Information | Accessibility Statement
ThriftBooks® and the ThriftBooks® logo are registered trademarks of Thrift Books Global, LLC